Metallacyclobutanes contain at least one metal atom as well as carbon atoms in a four-membered ring. They are reactive intermediates often found in cyclopropanation and olefin metathesis, where they are commonly formed by the reaction of a metal carbene with the C=C bond of an olefin. Understanding how such a metallacycle breaks down over time and how the fragmentation can be controlled can be useful for the development of new, selective catalysts.

Marc-Etienne Moret and colleagues, Utrecht University, The Netherlands, have isolated a nickel-containing metallacyclobutane (pictured above) and explored its reactivity. First, a 1,1-bis[2-(diphenylphosphino)phenyl]ethene ligand was synthesized from the corresponding ketone via a Wittig reaction. Then, the desired compound was prepared by forming a nickel complex of 1,1-bis[2-(diphenylphosphino)phenyl]ethene and reacting it with a substituted diazomethane, followed by the elimination of N2.

The metallacyclobutane slowly undergoes an apparent β-hydride elimination reaction in non-polar solvents (pictured below, yellow arrow). The team explored the influence of additional ligands on the fragmentation pathways of the compound. Carbon monoxide led to the formation of a cyclopropane ring (red arrow), whereas acetonitrile favored a metathesis-like cleavage to new carbene and olefin fragments (blue arrow). These observations demonstrate the impact of the coordination environment on the reactivity of nickelacyclobutanes, according to the researchers. Appropriate ligand design could be used to direct nickel-catalyzed olefin metathesis. 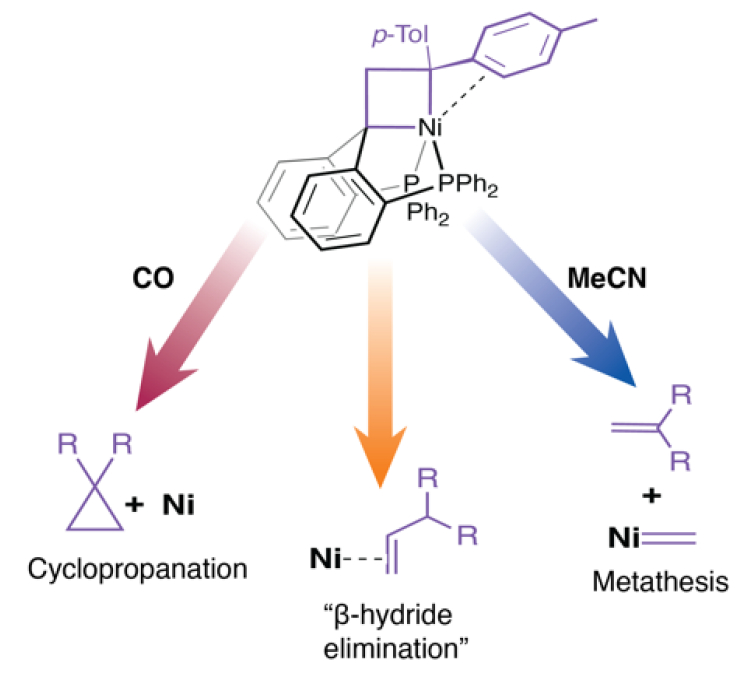