Nickel-rich nickel-cobalt-manganese (NCM)-type layered oxides are promising candidates for cathode materials that help to satisfy the increasing energy demand of lithium-ion batteries for automotive applications. Thermal and cycling stability issues originating from high Ni contents can be addressed by mitigation strategies such as doping and surface coating. Although both approaches separately benefit the cycling stability, there are only few reports investigating the combination of both doping and coating.

Richard Schmuch, Aurora Gómez Martín, University of Münster, Germany, and colleagues have investigated the combination of Zr as a common dopant in commercial materials with Li2WO4 or WO3 coatings. The team focused on the impact of different processing conditions on structural parameters and electrochemical performance in Ni–Mn–Co || graphite cells. The coating was performed via co-precipitation of the two coating materials, followed by annealing. The team also prepared reference materials that underwent the same heat treatment as the coated samples. 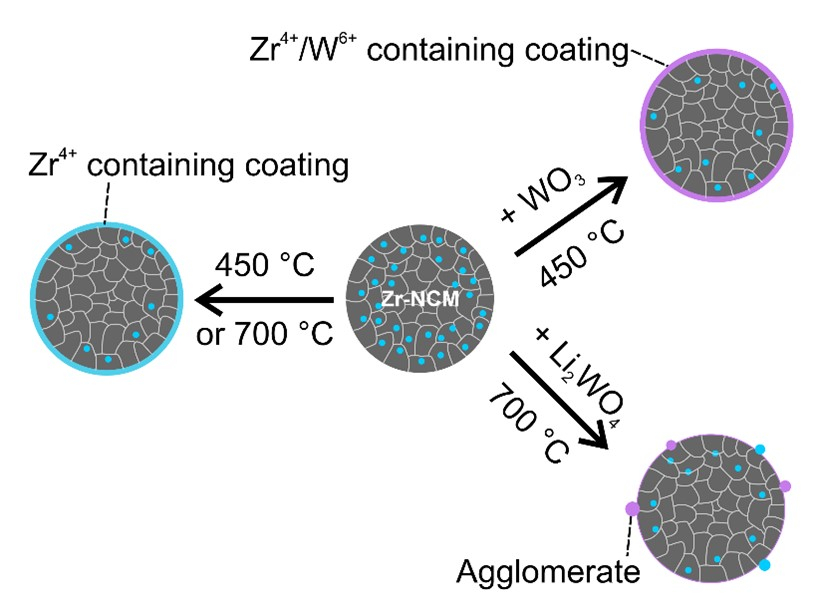 The team found that the W6+-containing coatings and the Zr4+-based bulk dopant influence each other. The Zr4+ dopant diffuses to the surface during annealing and improves the electrochemical performance. The Li2WO4-coated sample, however, shows an uneven surface and the presence of agglomerates, which are likely connected to inferior long-term cycling. This work highlights the importance of not only investigating individual dopants or coatings, but also combinations of both.