Fireworks give thrill, joy, and excitement. People admire the wonders when the skies light up with sparkling displays to celebrate special events. Germany’s traditional New Year’s Eve celebrations are, that at midnight households take to the streets to set off masses of consumer-grade pyrotechnics. However, the thrill and excitement come with a downside. In addition to the acute health threats from handling explosives, fireworks also come with a long list of chemical hazards including polluting gases, particulate matter, chlorinated hydrocarbons, perchlorates, heavy metals, and microplastics contamination.

Some might ask a simple question: are eco-friendly fireworks possible at all? No, says Germany’s federal environmental agency, mentioning the more than 2000 tons of particulate matter emitted, the many injuries recorded, and the tons of waste left in the environment [1]. Others, however, might retort that in recent years, chemists and military engineers have invested a great deal of time and effort in making pyrotechnics less problematic. Here are some examples:

In the 1990s, Walt Disney Corp., Los Angeles, CA, USA, was forced to overhaul its pyrotechnics formulations. Every year, Disney theme parks set off an estimated one million fireworks, bringing with them significant smoke pollution, as well as other hazards.

In addition, since 2004, Disney has been launching its fireworks into the air using pneumatic systems instead of lift-off charges made of gunpowder.

The main proponent of perchlorate-free pyrotechnics was the US military. Perchlorates are used as an effective oxidizer in pyrotechnics formulations. They had already replaced chlorates, which were part of the original pyrotechnics developed in the 1930s, but have an even higher chlorination potential leading to dangerous dioxins.

However, neighborhoods close to military training areas recorded high concentrations of these perchlorates in drinking water. If ingested, they can affect thyroid function by impairing iodine uptake and cause growth abnormalities in embryos. This contamination problem prompted the US government to impose strict limits on perchlorates.

Since then, the US military has massively reduced this oxidizer in flares and other pyrotechnic applications, replacing perchlorates with nitrates or periodates. Despite this, perchlorates are still used in consumer fireworks sold the world over.

Unfortunately, chlorine remains an important component in fireworks because of its contribution to color quality. In particular, copper (blue) and strontium (red) only seem able to create their intense colors when in the form of their chloride salts. However, chlorine-containing additives react with organic by-components to give chlorinated hydrocarbons such as dioxins and chlorophenols, which are carcinogenic.

US studies measuring the fireworks’ output on Independence Day, July 4, detected a huge surge in chlorinated organics around display locations. What’s more, a Swiss study of 2014 monitoring hexachlorobenzene during the firework displays to celebrate the Swiss National Day on August 1, concluded that fireworks emissions may represent up to 14 % of the total hexachlorobenzene released nation-wide [3].

Recent lab-based studies presented possible solutions to the chloride problem. For example, a paper from 2015 proposes a chlorine-free red flare. The researchers discovered that urotropine (hexamethylenetetramine) addition can repress the orange fraction of strontium oxide emission so that the deep red color band of strontium hydroxide reaches the same intensity as the original chloride-based one [4]. In the same year, a team from the LMU University of Munich, Germany, found that bromides would do the same job as chlorides in the blue copper flame [5]. 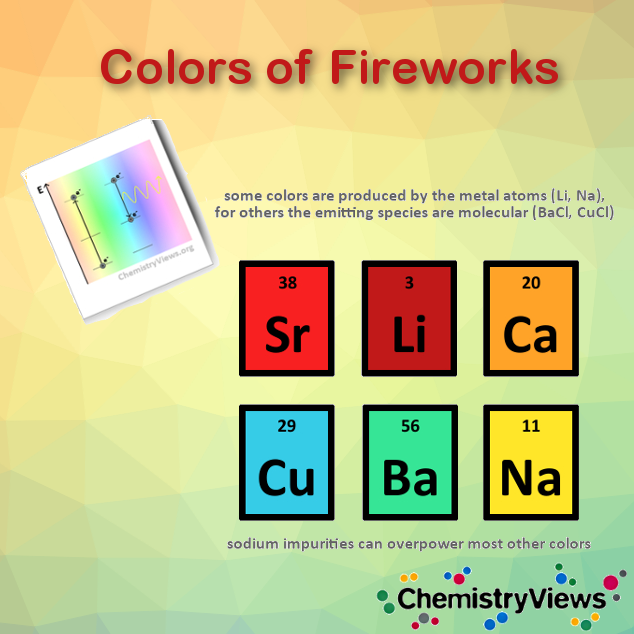 Metals are the source of fireworks’ vivid colors. Luckily, most colors come from relatively safe elements such as calcium, sodium, and magnesium. Firework producers also add metals in as small quantities as possible, not least because of their cost. However, barium, which is toxic as a soluble salt, is needed for the green color. Nonetheless, according to a paper from 2014, the same intense green can be produced with a formulation based on tris(2,2,2-trinitroethyl)borate and boron carbide [6].

Waste from packaging is a big concern especially for those who clean up after festivities. Even if most packaging is made of cardboard, it might release microplastics and chemicals from labels and binders when left in parks and gardens.

Some fireworks producers are addressing this problem either by developing fully combustible plastics that would burn up in the air, or by using biodegradable parts. Weco, for example, a proudly “Made in Germany” producer claims on its website that it uses recycled compounds and 100 % biodegradable materials for any plastic parts.

Switching to Other Ways To Get Your “Aahs” and “Oohs” 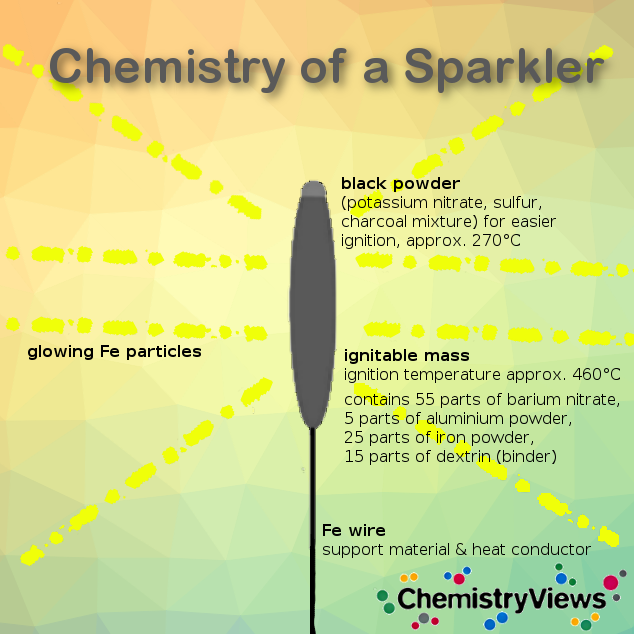 When buying fireworks was not possible on New Year’s Eve 2020, many families chose to entertain themselves with sparklers. However, these also carry chemical risks, especially when used in confined spaces. Ernst-Christian Koch, explosives expert and co-author of the paper on urotropine additives in red flares, says he always cringes when watching celebrations using sparklers indoors.

Most commercial sparklers use barium nitrate as an oxidizer. When they burn, traces of the metal are released and fall to whatever surface they are on. “I don’t think you would like barium icing on your cake, would you?” asks Koch.

Soluble barium salts are highly toxic. In poisoning, it blocks potassium efflux channels resulting in an increase in intracellular potassium levels and hypokalemia with effects on muscles and organs. However, fully oxidized sulfur in the flame will bind barium as insoluble barium sulfates.

Lasers and Drones
That leaves laser or drone shows. Unfortunately, there are few companies that can orchestrate an exciting drone display. These shows are also weather-dependent: when Intel tried to launch a big drone light show on July 4, 2018, high winds put a stop to it and the show had to be postponed to the following day.

The German Ophthalmological Society (DOG) also has a suggestion: instead of setting off fireworks in the street or our yards, we should go and watch professional, organized displays. This would also have the benefit of protecting children from eye injuries [7]. If only the other solutions were that simple!