On June 24, 2011, an event was held to commemorate the opening of the RIKEN Beijing Representative Office established in December, 2010 by RIKEN, Japan’s flagship institution for comprehensive scientific research.

With roughly 270 attendees from throughout China, the opening event centered on the signing of an Memorandum of Understanding for Cooperation (MOU) between RIKEN and the Department of International Cooperation of the Chinese Ministry of Science and Technology (MOST). This MOU marks the strong resolve of both parties to promote research cooperation between RIKEN and its partners in China. It will facilitate the holding of joint symposiums, exchange of research personnel, and the designation of important areas for research cooperation.

At the event, RIKEN President Ryoji Noyori presented a lecture on “Science and Technology for Future Generations” in which he emphasized the need for Japan and China to work together to resolve the global issues of energy, food, health, and environment that confront humanity today. 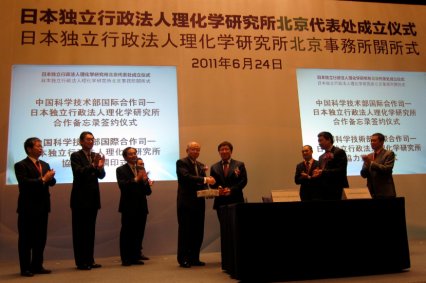 RIKEN was first organized in 1917 as a private research foundation, and reorganized in 2003 as an independent administrative institution under the Ministry of Education, Culture, Sports, Science and Technology of Japan. It carries out high level experimental and research work in a wide range of fields, including physics, chemistry, medical science, biology, and engineering, covering the entire range from basic research to practical application.

RIKEN first applied to the Chinese Ministry of Science and Technology for permission to open an office in Beijing in September 2007. Permission was granted and the RIKEN Beijing Representative Office registered in December 2010. Since it first exchanged a general memorandum on research collaboration with the Chinese Academy of Sciences in 1982, RIKEN has been actively involved in personnel exchange, joint research, joint symposiums, and other such collaborations with a broad range of Chinese partners ranging from the Chinese Academy of Sciences’ Institute of Modern Physics to the universities of Peking, Tsinghua, Shanghai Jiao Tong, Xian Jiaotong, and Zhejiang. In addition to this, RIKEN has more than 100 Chinese scientists working on its campuses. China is an important partner for RIKEN and RIKEN will be actively promoting its collaborations with Chinese institutions.