Most named reactions celebrate synthetic chemists who devoted their lives to the advancement of this discipline and, in general, to research.

The Biginelli dihydropyrimidine synthesis is one of the most important and oldest multicomponent reactions and has been extensively investigated in terms of application and mechanism. Surprisingly, little information is available on its discoverer, the Piedmontese chemist Pietro Biginelli (1860—1937). This is, in part, due to the fact that Biginelli dedicated only a few years of his professional life to synthetic organic chemistry. For the most part, he focused on forensic analytical chemistry and commodity science and took on increasing administrative commitments, culminating in his nomination to Director of the Chemical Laboratories of the State Institute of Health (Istituto Superiore di Sanità), Rome, Italy.

Pietro Giacomo Biginelli was born in Palazzolo Vercellese, a small country town in what was then the Kingdom of Sardinia, and soon became the Kingdom of Italy. In 1881, Biginelli entered the University of Torino, Italy, where he worked under Icilio Guareschi on the polyhalogenation of naphthalene. Biginelli graduated in Chimica e Farmacia in 1886, and the study on naphthalene was published a year later.

After several years at the School of Agricultural Sciences in Milan, Italy, Biginelli moved to Florence, Italy, in October 1890, to work in the labs of Hugo Schiff. Building on the observations of Schiff and Behrend, Biginelli investigated the reaction of ethyl acetoacetate and urea in the presence of aldehydes (Fig. 1). By heating urea, salicylaldehyde, and ethyl acetoacetate at reflux in absolute ethanol for two hours, he obtained a precipitate. Elemental analysis of the precipitate (C14H16N2O3) evidenced the dehydrative incorporation of all atoms from the reactants into the adduct. Through extensive dissection of this multicomponent reaction, Biginelli concluded the ternary adduct had a heterocyclic, not linear, structure and that a pyrimidine derivative was obtained.

Figure 1. The first Biginelli multicomponent reaction as originally reported by the author in 1891.

At the turn of the 19th century, condensation reactions of ureas were considered “old-fashioned” and Biginelli’s reaction faded into obscurity. Interest in Biginelli’s reaction has only revived in recent years as the growing biological relevance of dihydropyrimidines has become apparent.

Biginelli gave a second important contribution to chemistry in his study of Gosio’s gas — the poisonous gas emitted by microorganisms growing on arsenic. This (in)famous chemical has recently surfaced in connection to events such as the death of Napoleon, sudden infant death syndrome, and the poisoning of wells in Bangladesh. To prove the gas’ structure, Biginelli obtained sufficient amounts of a crystalline precipitate by bubbling the gas through various solutions. He identified Gosio’s gas as diethylarsine based on its elemental analysis, however, its correct structure was eventually established as trimethylarsine in the 1930s. 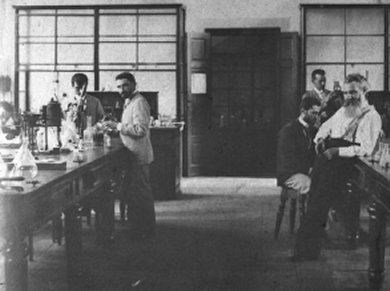 After studying the composition of Gosio’s gas, Biginelli was not involved anymore in cutting-edge research as he took on an administrative role and his lack of publications in later life contributed to the oblivion in which he fell after his death.