There was nothing that made you think it was a closing event. Everything was planned to mark the beginning of a new era for chemistry. The day started with the Young Leaders forum, an interactive morning debate with a group of young business students/scientists, on the theme “The world in 2050: Our expectations from the life sciences, chemistry, industry and governments to build a better world by 2050”. The discussion focused on how the 9 billion people that are expected to inhabit the planet in 2050 will have healthy, safe and fulfilled lives in symbiosis with our planet as well as the role of chemistry in achieving these goals.

After lunch, the official program started with the Opening Remarks by Christian Jourquin, CEO of Solvay, who reminded us of the anniversary of the famous First Solvay Conference which was also held in Brussels just 100 years ago. This meeting brought together the top scientists at the beginning of the 20th century, among them Marie S. Curie, of whom we are celebrating the centenary of her Nobel Prize in Chemistry. Mr. Jourquin remarked that “chemistry is a global language because it is objective and without dogmas”. “Chemistry is an international language” he said, something that was even more evident during the IYC because of the participation of so many people in the activities organized throughout the year.

The official opening of the event was done by HRH Prince Philippe of Belgium, who pointed out that this is not about the end of the IYC, but the beginning of a new area of chemistry. “This ceremony is not only about celebrating all the IYC has achieved”, he said, adding that we need to educate a new generation of great scientists who will find the solutions we need to solve the challenges we face. HRH Prince Philippe concluded his opening remarks by inviting all the participants to engage in a discussion on how chemistry can have a central role in expanding our horizon because “there will always be fresh challenges posed to mankind”.

Marie Geoghegan–Quinn, European Commissioner for Research, Innovation and Science, then took the stage to invite all the participants to brainstorm about how to build and implement simpler, more efficient research funding programs to place excellent research on the market. Commissioner Geoghegan–Quinn talked about the key role of both basic research and the chemical industry to take nano- and biotechnology to the next level. “Chemistry is the stuff of life”, she said, inviting the next generation of scientists to tackle the main problems humankind faces today. 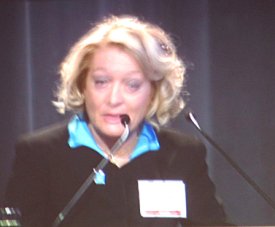 Finally, IUPAC President Professor Nicole Moreau announced that she would be the only speaker talking about the past, because she wanted to make us aware of the many activities carried out during the IYC all around the world. She emphasized two global activities: Women Sharing a Chemical Moment in Time and the Global Experiment of the International Year of Chemistry. Under the theme: “Water: A Chemical Solution”, it reached hundreds of thousands of students from more than 70 countries who carried out a series of experiments about water. They created probably the largest “crowdsourced” chemistry experiment ever, and a great activity that aims to educate and engage young people about the key role of science in the future of this planet. Prof. Moreau finished her presentation surprising the audience by announcing the names and symbols of the recently discovered elements with atomic numbers 114 and 116, flerovium (Fl) and livermorium (Lv), respectively.

The coffee break was an excellent opportunity to visit some of the booths displaying the results of the activities of the IYC, like the Global Stamp Competition: Chemistry as a Cultural Enterprise organized by Lida Schoen. She was there and showed some of the winning stamps from all around the world – a great example of what can be achieved when combining chemistry and art. The Global Experiment of the International Year of Chemistry was also presented at a booth. The results of this global activity were presented in the form of pictures, posters, and videos done by students from the five continents.

Back in the main auditorium, a group of young chemists, the Young Leaders, presented their vision of the world in 2050 and the role that chemistry will play then. Geoffery E. Merszei, Executive VP of the Dow Chemical Company, introduced the discussion trying to answer the self-imposed question: “Where does sustainable development begin?”. Then, three representatives of the Young Leaders presented their vision for 2050 by taking the role of three chemists working in the US, China, and Africa in 2050. Their priorities for building that future were: feeding the world, providing clean water to all, high quality research and education, building public-private partnerships, and inspiring a new generation of scientists by positioning chemistry as “the Enabler”. 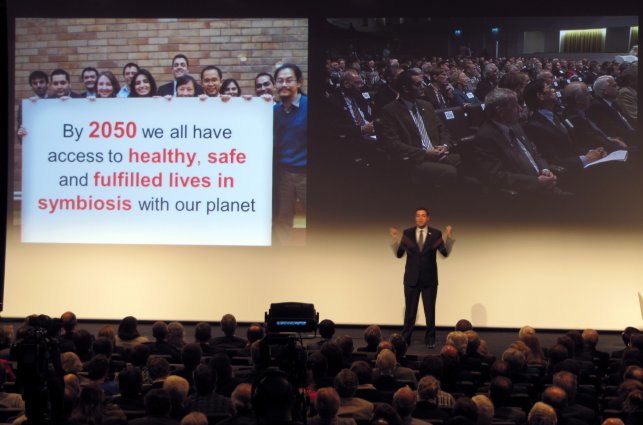 The Young Leaders presented their vision of the world in 2050 and the role that chemistry will play in that future.

The “Scientists’ Response“ was presented by the Chemistry Nobel Prize winner Prof. Ada Yonath who answered the question in the title of her presentation “Is there a limit to life expectancy: wishes, predictions and reality” by providing examples of how antibiotics significantly increased life expectancy during the central years of the 20th century. Prof. Yonath then strongly emphasized the risk that antibiotic resistance represents, urging the leaders of the pharmaceutical companies, many of them in the audience, to tackle this problem with ambition and enough resources.

After a very inspiring lecture by Jean-Luc Brédas on how chemistry can contribute to solve our main challenges, especially providing clean, affordable energy to all, he engaged in a lively discussion with the Young Leaders. The conversation focused on the different technologies capable of providing new materials for clean energy production and storage.

Finally, a panel of top scientists and industry leaders including Ellen Kullman, CEO of DuPont, Jean Stéphenne, President of GSK Biologicals, Prof. Ada Yonath, Nobel Prize laureate 2009, Prof. Jean-Luc Brédas, Francqui Prize 1997, Dr. Stefan Michalowski, Executive Secretary of the OECD Global Science Forum, and Hanna Trojanowska, Under-Secretary of State in the Ministry of Economy of Poland, discussed how to implement some of the ideas suggested during the day by very practical examples. Some of the areas covered during the discussion included how to make science sexy, how to encourage creativity and critical thinking in the classroom as well as role models.

I am writing this at Brussels airport. As I am waiting for my flight back home, I feel energized, happy for the success of the IYC and passionate for the fertile and bright future that this central science will have in the coming years. We had a year to celebrate chemistry and to reach out to the general public about the contributions of this science. Now it is time to deliver the solutions only we can provide to the challenges humankind faces today and in the future.

Javier Garcia Martinez is director of the Laboratory of Molecular Nanotechnology at the University of Alicante, Spain, founder of River Technology and author of The Chemical Element: Chemistry´s Contribution to Our Global Future.

Other articles and books by Javier García-Martinez

Book: Nanotechnology for the Energy Challenge

Unique in providing an overview of the subject on the scientific level, this book presents the current state of the art with regard to different aspects of sustainable energy production and its efficient storage.

Book: The Chemical Element: Chemistry’s Contribution to Our Global Future

In the International Year of Chemistry, prominent scientists highlight the major advances in the fight against the largest problems faced by humanity from the point of view of chemistry.