The commemorative ceremony for the 150th anniversary of the Department of Chemistry in the School of Science at The University of Tokyo was held on November 27th, 2011. Coincidentally, this year was also designated as the International Year of Chemistry 2011 (IYC 2011) and over 400 participants gathered to reflect upon the storied history of our department and the spectacular achievements and contributions to chemistry made by our predecessors.

The ceremony was opened with congratulatory speeches from key representatives from industry, government, and academia (below). Following them, Professors Eiichi Nakamura and Hiroo Hamaguchi delivered keynote lectures on behalf of the active professors. Participants enjoyed a riveting performance by a soprano singer (above) and a lively party afterwards. 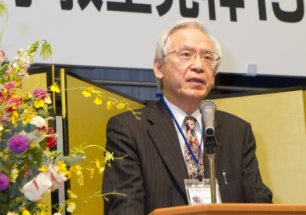 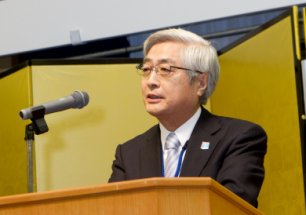 The history of the Department of Chemistry began in 1861 and can be traced to the establishment of the Department of Manufacturing Chemistry (Seiren-kata) at the Institute for the Study of Foreign Books (Bansho Shirabesho). After the Meiji Restoration, various educational institutions were amalgamated in 1877 to form what is now known as The University of Tokyo.

Recently, the internationalization of the university and department has been rapidly developing and numerous postdoctoral researchers, graduate students, and undergraduates from various parts of the globe have gathered and are studying in the Department of Chemistry at The University of Tokyo. As of last year, the option for enrollment in October has been established (historically, new terms start from April in Japan), and all lectures for graduate courses are conducted in English.

A unique feature of this department is that more than half of our 3000+ alumni have found their way into academic positions and others have played active and leadership roles in various levels of government, industry, and research institutes. 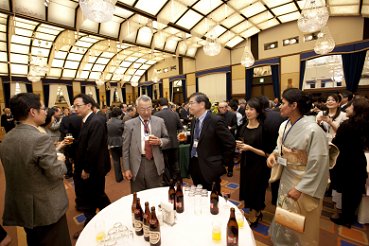 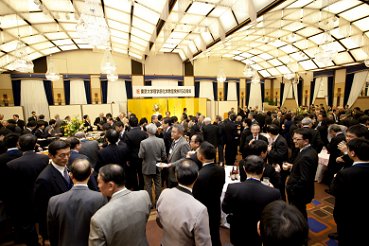 The party gave everyone a chance to catch up with old friends and make some new ones.

There is no doubt that pursuit of scientific truth and knowledge will benefit society. The knowledge we gain from the study of chemistry has, and will continue to, provide the materials and tools necessary to aid people and help build a well-maturing society. The transfer of knowledge from the academic setting into practical applications is of paramount importance and the Department of Chemistry has begun to develop industrial partnerships to study common research goals. In 2009, the photoelectric conversion laboratory was established with the cooperation of Mitsubishi Chemical Co. to study the basic science in thin-film devices in order to develop novel solar cells. In addition, the formation of a Green Sustainable Chemistry (GSC) laboratory is anticipated in the near future.

Needless to say, it is clear that chemistry will play a central role in building a sustainable society based on the harmonious interaction between mankind and the environment. The Department of Chemistry in the School of Science at The University of Tokyo will continue the tradition of excellence established by our forefathers and provide society with cutting-edge knowledge and well-educated people to meet the challenges of tomorrow.

Professor Shu Kobayashi is President of the Department of Chemistry at the University of Tokyo, Japan, and a member of the Editorial Board of Chemistry – An Asian Journal.

For more on the history of the department of Chemistry, see: