Armido Studer is Professor of Organic Chemistry at the Westfälische Wilhelms-Universität Münster, Germany, and co-editor of the book Encyclopedia of Radicals in Chemistry, Biology and Materials. He talks to ChemViews magazine about the past, present and future of the field of radical chemistry, his research, and why teaching is important to him.


What was your motivation to get involved in editing the Encyclopedia of Radicals in Chemistry, Biology and Materials?

The co-editor, Dr. Chryssostomos Chatgilialoglu, Consiglio Nazionale delle Ricerche (CNR, National Research Council), Bologna, Italy, and I noted that there have been some books and many review articles published on the various sub disciplines of radical chemistry. However, an Encyclopedia covering all the sub disciplines was clearly missing. We felt that it was overdue to gather all these fields into a single book series. This will allow the reader to get a broad overview on this very broad field in a relatively short time.

The book will be highly useful for experts, since most of the current knowledge on free radical research is covered in an in-depth way. Of course we also hope that with the help of the Encyclopedia, non-experts will find a good place to start when entering into research on free radicals. Moreover, the Encyclopedia might foster new collaborative work within the various sub disciplines.

How broad do you consider the field of radical chemistry?

Although radicals are generally considered as reactive intermediates which are difficult to be tamed, the knowledge gathered over the years on their structures and reactivity has paved the way for their application in various fields of chemistry, e.g., synthesis, polymer chemistry and materials science. Complex natural products requiring several bond forming steps have been successfully prepared by using radical cascade reactions for the key steps. Concepts to control the stereochemical outcome of radical reactions have been developed during the past 30 years. Moreover, transition metals — generally not discussed in the context of radical chemistry — are gaining increasing importance in that field.

So what are the latest developments in polymer chemistry and materials science?

Polymers produced by radical processes represent roughly 40–45 % of all industrial polymers. While large scale polymerizations are conducted via noncontrolled processes, more sophisticated materials can nowadays be prepared by using controlled radical polymerization techniques. Tailor-made plastics with specific properties are available thanks to these novel methods.

In the field of materials science, radicals have found great applications as spin labels and spin probes. More recently, persistent radicals have been used as active components in organic batteries and in organic magnetic materials.

Along that line I have to mention the research on antioxidants. Moreover, there are several examples where free radical mechanisms are involved in antitumoral or antibacterial activities.


Where is the field heading, in your opinion?

As I was mainly in charge of the synthesis and materials science parts of the Encyclopedia, I will restrict my perspective views to these two areas.

In the field of organic synthesis, I personally feel that merging the areas of radical chemistry with transition metal chemistry will lead to exciting new achievements in future. Systematic study of the interaction of radicals with organometallic compounds is missing. This might lead to the discovery of new reaction modes.

I also believe that many reactions currently considered as transition-metal mediated processes should better be described as free radical reactions. I am sure that we will learn a lot in the future about such cases.

As convincingly documented in the Encyclopedia, nature uses radical chemistry at the highest level. Radical enzymes catalyze amazing transformations where the mechanisms are not obvious at first glance. It is clear that we have to learn more about such processes and to try to add such reactions to the portfolio of the synthetic organic chemist. I would call this highly interesting and challenging research area biomimetic synthetic radical chemistry.


And in materials sciences and polymer chemistry?

In the field of materials science, radical chemistry has been successfully used for the preparation and chemical modification of different materials, including organic and inorganic type materials. This is due to the great functional group tolerance of radical reactions and their robust nature. This area will certainly gain further importance. In polymer chemistry the controlled radical polymerization processes should find industrial applications in the future. I consider sequence specific polymerization as an important research area in polymer chemistry. It is very difficult to control the order of monomer incorporation into a growing polymer if more than two different monomers are used. Radical type processes have the potential to make important contributions to this area.

During my postdoc I worked for Professor Dennis Curran at the University of Pittsburgh, USA, who has made many important contributions to the field of synthetic radical chemistry. Although I was not working on radical chemistry at that time, I learnt a lot about radical chemistry in discussions with Dennis and other group members. I was very impressed by the potential free radical chemistry offers and I regarded that field as a good starting point to initiate my own scientific career.


And what are your current research activities?

We are working on the development of new synthetic methods in the field of free radical chemistry. We use free radicals in novel transformations in organic chemistry, often focusing on the TEMPO (2,2,6,6-tetramethylpiperidine-1-oxy) radical along with other heteroatom centered radicals. We utilize free radicals also in materials science: controlled living radical polymerization and nitroxide exchange reactions allow the generation of new materials, e.g., structured surfaces, immobilized catalysts or highly ordered (nano) particles.

We study the reactivity of free radicals towards other reactive intermediates such as metallorganic species. As a result we have been able to design new processes, thereby contributing to the field of transition metal catalysis and also organocatalysis in recent years.


Why do you think is it important for a student to study radicals?

As radicals are important in many research areas, as documented in the Encyclopedia, I think that it is highly important for a student to learn about the basics of free radical reactions early in their education. A solid basic education in radical chemistry (kinetics, thermodynamics, structure analysis, etc.) is extremely helpful if the student later wants to enter a field where radicals have to be considered. This might be a more biology oriented area or research in the field of materials science.


Please tell us a bit about how your career has developed?

I did my Ph.D. under the supervision of Professor Dieter Seebach at the ETH in Zürich, Switzerland. I learnt a lot about stereoselective synthesis, enolate chemistry, and also got involved in peptide chemistry. Importantly, from my mentor I learnt how to teach at the highest level and he fully convinced me that teaching, although time consuming, is very important — “a good researcher is in most cases also a good teacher”.

As already mentioned above, I continued my career as a postdoc in the laboratory of Dennis Curran in Pittsburgh. There I was working on fluorous chemistry and, as already indicated, I got interested in radical chemistry. I then started my independent career as a junior scientist (habilitand) at ETH Zürich working on homolytic substitutions at silicon and on stereoselective radical aryl migrations.

My early contributions led to a call as a C3 professor at the Philipps-University in Marburg.

In Germany I started to work on controlled radical polymerization and also initiated a research program on stereoselective reactions. I then moved as full professor to the Westfälische Wilhelms-University Münster, Germany. With more resources at my disposal, I further extended my research interests towards homogeneous catalysis. In particular, I started to work on the development of transition-metal-free C–C-bond forming reactions. Heavily influenced by surface physicists, I also initiated work on surface chemistry. In collaboration, we have successfully established new methods for site selective chemical surface modification using radical processes.

Another research area to name, is the chemistry of stable free radicals which have been successfully applied by us in synthesis, catalysis, polymer chemistry, for the preparation of hybrid materials, and for selective chemical surface modification. My broad research interests allowed me to initiate an interdisciplinary collaborative research center (SFB) in Münster that is headed by me. I was able to gather scientists from different fields to work on a common research topic “Synergistic Effects in Chemistry”.


What advice would you give to up-and-coming scientists?

Before starting an independent career I suggest young scientists do postdoctoral studies in a competitive research group working in a field that is not related to the research area he was working in during his Ph.D. After starting the independent career, the young scientist should ideally find early in his career his own scientific signature or identity. Once the key field has been identified, this core expertise should be interpreted in a broader sense. The scientist should read literature which is not fully related to his own field but can be found at the borders of the core area. This should allow him to further develop his key competences. It is important for a young scientist to discuss science as often as possible with more experienced colleagues. International scientific exchange in any form is highly important: e-mail, meetings, invitations of guest lecturers, etc.

In addition, the young scientist should take his teaching duties very seriously. That is the place where he has the chance to convince the best students to join his group. It is, in my eyes, highly important that the research leader is discussing chemistry with his students as often as possible. The young scientist has to create a nice but competitive group atmosphere.


What is the best advice you have ever been given?

The best scientific advice I was given was to apply for a full professorship at the University of Münster. The environment in Münster has allowed me to expand my research interests towards surface chemistry. I had the possibility to start interdisciplinary research projects in collaboration with colleagues from the physics department. It was exciting for me to learn the “language” of my physics colleagues and to learn about their scientific problems and views.


And what would you like to be doing ten years from now?

I already highlighted my personal views on where radical chemistry in synthesis and in materials science is heading in the future. I hope that during the next few years I will be able to make important contributions to these areas. I am confident that in 10 years I will still be working on the development of synthetic methods (the basic research on synthesis). There is still a lot of improvement needed there! I will most likely work on expanding the applications of the synthetic methods we have developed to neighboring disciplines. Collaborative work will be even more important for me than now. I will try to identify new fields where synthetic radical chemistry can contribute. This will be either in biology/medicine or in materials science.


What do you do in your spare time?

I like gardening and biking and I try to spend as much time as possible with my wife and my two sons.


Thank you very much for this interview! 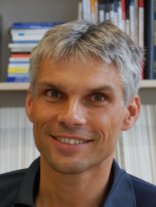 Professor Armido Studer studied chemistry at the ETH Zürich, Switzerland, and gained his Ph.D. from there in 1995, under the guidance of Professor Dieter Seebach. From 1995–1996, he performed postdoctoral studies at the University of Pittsburgh, USA, in the group of Professor Dennis Curran. Studer did his Habilitation at the Laboratory of Organic Chemistry, ETH Zürich, on the development of new synthetic methods in the field of free radical chemistry.

Since 2009, he has been Full Professor (W3) of Organic Chemistry at the Westfälische Wilhelms-Universität Münster.