Ovalbumin [1] (Fig. 1) is an almost spherical glycophosphoprotein which is the most common protein in egg white, representing nearly 60 % of the whole. The peptide chain consists of 385 amino acids (MW = 42,700 Da). Hydroxyl groups from the side chains of serine-68 and serine-344 are esterified with phosphoric acid, and an oligosaccharide is attached to the side chain of asparagine-292. 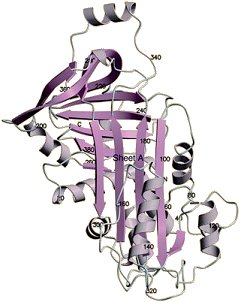 Ovotransferrin [2] (Fig. 2), constituting 13 % of the egg white, consists of 686 amino acids (MW = 77,000 Da), and may bind two iron- or other multivalent-metal-cations. This bonding involves two phenolic hydroxyl groups (from tyrosine) and a nitrogen atom (on histidine). Strong binding with iron inhibits the growth of microorganisms (as well as Salmonella enteritidis) in the yolk, a process that requires a constant influx of iron. 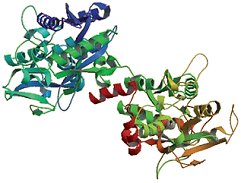 Ovomucoid [3] (Fig. 3) accounts for 11 % of the protein content of egg white. It occurs in various forms, which differ in the amount of carbohydrate bonded via asparagine. Nine disulfide bridges and a high content (< 80 %) of helical and β-pleated sheet structures confer upon ovomucoid such a stable spatial structure that it is not denatured even upon boiling. 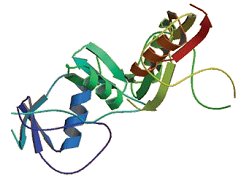 Ovomucin is a relatively small protein (MW = 10 kDa) to whose amino acid chain a wide variety of carbohydrate entities (glucosamine, glactosamine, hexoses, scialic acid) are bound, and a substantial portion of whose hydroxyl groups are esterified with sulfuric acid. Due to its polar character, ovomucin aggregates to filamentous and fibroid structures. The high viscosity of the egg white layers is a consequence of a high ovomucin content.

Lysozyme [4] (Fig. 4) is one of the most thoroughly investigated of all proteins and was the very first protein subjected to X-ray structural analysis [5]. As implied by its name, it is an enzyme, one found in other animal tissues and secretions as well. It cleaves specific bonds in specific polysaccharides, ones that constitute the cell walls of many bacteria [6]. Lysozyme thus has antibacterial activity, and provides an embryo with a measure of protection against infection during its developmental phases. 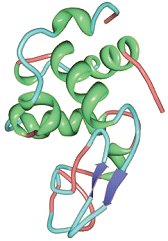