In many parts of the world, a freshly boiled (usually soft-boiled) egg is the crowning touch to every breakfast table, and is the very embodiment of a good start to the day. When we rap a knife on the white or brown shell of such an egg we are seldom conscious of what a technical marvel we are dealing with. Under that unpretentious eggshell (which in itself is a structural masterpiece!) is concealed, in the narrowest of spaces, a fully-fledged culinary delicacy, one that deserves very close examination.
In this part we look at the chemical changes that occur when an egg is boiled and discover how to unboil the egg afterwards


6. The Boiling of an Egg, Examined from a Chemical Standpoint

In the popular scientific literature (but not just there), boiling an egg is always described as mainly entailing a massive uncoiling—and then recoiling—of proteins. In truth, however, a number of complex processes are taking place:

These manifold processes do not lend themselves to clear delineation, and to some extent they occur in parallel. A complicating feature is the fact that denaturation of the various proteins present in egg white occurs at different temperatures for different proteins (Table 2), and actual denaturation temperatures are also somewhat dependent on pH, as well as age and storage conditions.

Table 2. Proteins found in egg white. Data reported in the literature for the denaturing temperatures of individual proteins can vary considerably, since such values will have been established with solutions of the pure proteins under very diverse conditions.

But quite apart from the fact that everything depends upon everything, from a culinary standpoint it is impossible to point to an ideal soft-boiled egg: different people have different views regarding, for example, whether the white should have a particular degree of “softness” or fluidity, or whether it should instead have more “bite”.

From a chemical perspective – but one not recommended for culinary purposes (!) – the coagulation phenomenon can actually be reversed. It is seemingly a very simple thing to accomplish: By the addition of salts, such as a 6-molar guanidinium chloride solution, ionic interactions between the proteins are quickly destroyed. Moreover, with a reducing agent like sodium borohydride, NaBH4, all (–S–S–) disulfide bridges can be reduced to pairs of independent –SH bonds [23]. A hard-boiled egg white thereby reverts to a clear solution of various (denatured) egg-white proteins, even though it is not possible further to convince these proteins once again to fold up into their native states.

Certain folding processes, through which three-dimensional structures of proteins are modified, may by themselves induce proteins to accumulate into larger aggregates, often in unpredictable ways. Apart from inscrutable folding processes, however, there are also certain straightforward chemical reactions that occur in egg proteins when these are subjected to heat. Under alkaline conditions, associated especially with older eggs, and at elevated temperatures, for example, reactions are commonly observed involving cysteine side chains. The simplest is the replacement of an –SH by an –OH group, thereby transforming a cysteine into a serine module:

A byproduct here is hydrogen sulfide, the gas associated with the familiar “rotten egg” smell. H2S gas is toxic, but in this case its release is in such small quantities that it cannot possibly pose a health risk.

Of further significance (also from a culinary standpoint) are reactions specifically involving the amino acid serine, either directly or indirectly. The protein phosvitin, found in egg yolk, is extraordinarily rich in serine. Most of the associated hydroxyl groups are normally esterified with phosphoric acid. Through the many anionic sites that result, phosvitin is able to complex essentially all the iron (Fe2+) present in an egg (Eq. (8)). A simple procedure for determining the iron content in egg yolk has been described, by the way, in [24].

Prolonged cooking causes the cleavage (saponification) of serine’s phosphoric esters, leading to free phosphate (Eq. (9)); this means that complexed iron in the yolk also is suddenly set free. At the yolk/egg white interface, iron cations soon encounter hydrogen sulfide released by the transformation cysteine/serine in the egg white, resulting in formation of insoluble, brownish-black iron sulfide. This explains the typical dark ring one observes especially in hard-boiled eggs that have been boiled for a long time (Fig. 20).

Figure 20. Typical greenish-black ring at the interface between the white and the yolk of an egg.

7. The Chemical Highpoint of Egg Cookery

Boiling an egg is more than just a complex thermal conductivity phenomenon ushering in denaturation and coagulation processes, however. The chief protein in egg white, ovalbumin, representing more than 50 % of the proteinaceous material present, is subjected to a truly breathtaking chemistry all of its own.

Ovalbumin undergoes denaturation at temperatures as low as 77 °C, but even during simple storage it can gradually transform itself into the more heat-stable “S-ovalbumin”, which itself is ordinarily not denatured until it reaches 85 °C [25]. Protein chemists were for decades preoccupied with this remarkable transformation, and there was much speculation as to its nature and origin, although it was always assumed that a change in the folding pattern of the protein was somehow involved, in turn causing changes in spatial layout and thus in general characteristics.

Clarity was first achieved through very close comparison of X-ray structural data from native and S-ovalbumins [26, 27]. At first, the overall forms of the two seemed nearly identical (Fig. 21). But a big surprise came with more detailed examination. Like virtually all proteins, ovalbumin is of course composed exclusively of L-amino acids. The only formal exception to the generality of this rule involves the amino acid glycine, being the only one that is achiral. Only in very rare cases are comparable D-amino acids detectable anywhere in nature. 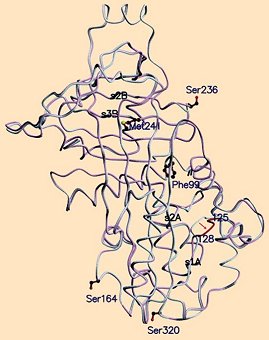 Figure 21. Superposition of X-ray structures for native and S-albumin from egg white. After rearrangement, three of the 34 serine units (Ser-164, -236, and -320) show inverted configurations; i.e., the corresponding L-serines have been converted to D-serines. These three inversions lead in turn to formation of an energetically more favorable hydrophobic core around phenylalanine Phe-99.

When ovalbumin is heated, something quite incredible transpires: three of its 34 serine units (Ser-164, Ser-236, and Ser-320) change their configurations from L to D! We say incredible, because for there to be such an inversion in configuration, a covalent bond at the serine α-carbon atom (i.e., the carbon bearing an amino group, and adjacent to carbonyl) must be severed, but then selectively reestablished. In this particular case what results is remarkably not a mixture of the two possible configurations: instead the three L-serine units singled out above change 100 % into D-serines—and that sometimes even at room temperature! This was enough to dumbfound laymen and chemists alike.

In any mechanistic consideration of this remarkable event, one should logically take into account that among all the amino acids, serine is the one that most readily undergoes racemization [28]. Starting with L-serine, one can easily prepare a 1:1 mixture of the two enantiomers, L- and D-serine, by simple treatment with base. The underlying change can be attributed to the electron-withdrawing effect of the nearby hydroxyl group, which facilitates the temporary removal of serine’s α-hydrogen atom in the form of a proton (Eq. 9).

As shown above, the overall phenomenon entails loss of a proton from the amino acid’s α-position, with its subsequent reattachment, but on the opposite face of the resulting planar carbanion. Complete inversion in configuration of three specific serines—Ser-164, -236, and -320—strongly suggests that S-ovalbumin must somehow be significantly more stable than ovalbumin itself. Again, careful analysis of the spatial environments of all the various side chains in the protein shows that in S-ovalbumin, thanks to the rearrangement of these three serines, the phenyl residue of phenylalanine 99 together with Phe-180 and Phe-178 are able to jointly form a compact, very hydrophobic core presenting only a minimal amount of surface area to surrounding water. This is indeed a more favorable situation energetically, so herein can be found the driving force for the entire rearrangement [27].

In Part 2 we examine an egg on its journey from hen to table, including in situ monitoring methods, to ensure the perfect breakfast egg

In Part 4, we reach the practical part as we discover the ideal egg, from a culinary perspective