When we take pesto prepared from fresh basil, fold it into steaming pasta, and allow the inimitable fragrance to rise up, we ask ourselves: with what aromatic molecules is this plant blessing us? Here we try to uncover the nature of this culinary-chemical marvel, and thereby come to enjoy it all the more.

Pesto (Italian for “crushed”) is a paste made out of pine nuts, garlic, hard cheese, olive oil, and of course — above all — basil. The dish originated in Genoa, Italy, where basil played an important role as early as the Middle Ages as a medicinal agent. In folk medicine it was deployed either fresh, dried, or as an oil for treating loss of appetite, flatulence, fever, cough, migraine, nervousness, sleeplessness, and digestive problems.

Every gastronome raves about herbs from the mint family, which includes such splendid representatives as marjoram, oregano, savory, sage, thyme, mint, lemon balm, and rosemary [1]. The most beloved members of the mint family belong to the genus Ocinum (gr. Ozein = to smell) [2], made up of over 60 species, where O. basilicum has gained the greatest significance. It is true that the aroma of Mediterranean basil is regarded as the most valuable, but this is an evaluation articulating European taste.

In Thailand alone, three different basil species are normally found in nearly every kitchen: horapha is a sweet variety with a strong aniseed (also called anise) character, krapao is the tangy and peppery-tasting so-called “holy basil”, and then there is manglak, the lemon basil.

In other countries one encounters many other basil varieties, including types that smell of cinnamon, cloves, camphor, and lime. The name “basil” is derived from the Greek basilieus (king), presumably as an expression of the high esteem in which the plant was held, and of its manifold applications. The German designation “Königskraut” and the French “herbe royale” are literal translations of the Greek.

Apart from parsley and chives, basil (Fig. 1) is today among the economically most important herbs. Much is employed fresh, but in addition nearly 50 tons of ethereal basil oil is produced annually for introducing an aromatic component into foods, cosmetics, and pharmaceutical products. 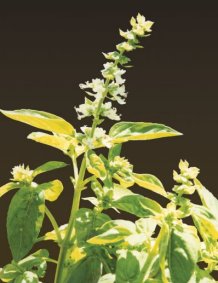 O. basilicum exists in a great many varieties and forms. These differ in plant stature, blossom or leaf color, leaf form and size, as well as in the composition of the related ethereal oils. Thanks to the development of new varieties and hybrids, we find today a confusing overall picture with respect to herbal diversity [3]. In European cuisine it is almost exclusively basil of the European type that is favored, also referred to as the Mediterranean or Genovese type (Fig. 2). This strain is also known in English, somewhat misleadingly, as “sweet basil”, a term that would actually be more appropriately reserved for certain Asiatic varieties. 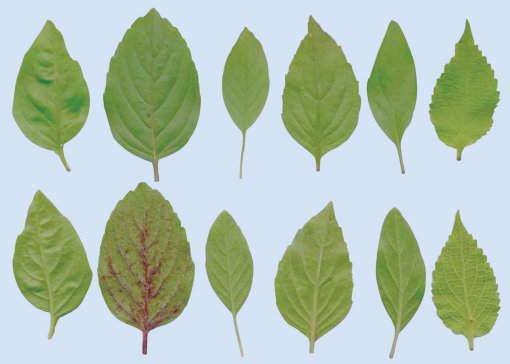 As a plant, basil is an annual that grows almost by itself, to a height of ca. 30–50 cm, assuming it receives considerable sunlight as well as a regular supply of water, and is not subjected to frost.

One should regularly trim back the shoot tips so that the plant will assume a bushy form. Basil tastes best in July, shortly before blossoms form, since after blossoming the content of its ethereal oils declines, and the leaves become firmer and more bitter. Moreover, the best flavor is associated with basil collected early in the morning. Blooming can be postponed by trimming off the flower buds. Should one’s crop become too abundant, leaves can be frozen in small portions.

Basil, Why Do You Smell So Good?

Except for a few minor variations, metabolism in all life forms operates on the identical chemical principles. Thus, the basic modules necessary for maintaining metabolism and for cell construction — fats, carbohydrates, amino acids, nucleic acids — are referred to as primary metabolites. Beyond this, one finds a vast array of natural substances produced by only one or at most a small number of species. These are compounds designated secondary metabolites.

To cite one example: only the South American cinchona tree is capable of producing quinine; no other living organism accomplishes that!

The sole purpose of the elaborate syntheses of secondary metabolites is ensuring that the corresponding organism gains an advantage in the daily struggle for survival [4].

Basil, too, provides its own unique smell and taste. The effort expended in the preparation of the plants’ special ethereal oil pays off in at least two ways. In the first place, the aroma attracts pollinating insects, and thus ensures continued existence of the species. This also explains a greatly reduced synthesis of fragrant substances after blooming occurs: the plant no longer needs to have insects visit. On the other hand, aromatic oils also protect each individual basil plant; many plant-eating insects are unimpressed by the intense flavor of the leaves, so they move on to find sustenance elsewhere. Basil in some cases even deploys its ethereal oil to kill injurious microorganisms directly.

2 What Are the Chemical Compounds Responsible For Basil’s Aroma?

Figure 3 shows gas chromatograms from two ethereal basil oils, originating in different countries: the Comoros Islands, which are located between East Africa and Madagascar, (Reunion type) and Egypt (Mediterranean type). Both oils were isolated as steam distillates from O. basilicum, but they offer completely different aromas. This is hardly surprising, since the chromatograms reveal at a glance that the two oils have very different primary components: linalool (1) from the Mediterranean type, and methyl chavicol (3) from the Reunion type.

Above: Mediterranean type (country of origin, Egypt), where the principal component is linalool (1), next to which are shown the structural formulas of a few other components. From left to right: α-pinene, β-pinene, 1,8-cineol (eucalyptol) (2), linalool (1), camphor, methyl chavicol (estragole) (3), eugenol (4), α-bergamotene, τ-cadinol.

An analysis of the many components (5–7) helps explain the properties of these ethereal basil oils: camphor, eugenol (the chief component of clove oil), and α- and β-pinene. The two pinenes are in turn the chief constituents of terpentine, which is obtained by distillation of tree resin. This resin has the function of closing wounds in the bark, and it repels all sorts of insects, fungi, and microorganisms. Other components serve as bactericides, fungicides, and agents to prevent infestation by worms and insects [8], protecting the plant from such pests.

For an epicure, aroma and taste of course occupy the foreground, and here a comparison of the two basil oils from different lands demonstrates the broad spectrum of their chemical composition. In contrast to classifying varieties on the basis of growth, color, or size of leaf, for the epicure it is above all chemotype that is decisive: i.e., which compounds dominate in the oil responsible for the aroma from the leaves. The following chemotypes, listed with their chief chemical components, are distinguished commercially:

The classification above is rather crude, because the chemical contents and their relative proportions are a function not only of geographical origin, but also of the nature of the relevant soil, the microclimate, and other environmental factors, as well as cultivation techniques.

All the components of basil oil are found in other plants as well (for details see: “Seductive Aromas of the Culinary Herbs”), but basil — like a professional perfumer — concocts its own distinctive fragrances. As examples, we describe here the biosyntheses of the different principal components of the Mediterranean and Reunion chemotypes [9, 10].

This C10-compound is the principal component of the ethereal oils of both basil and coriander, and it is also found in limited amounts in cinnamon, ginger, savory, bay leaves (laurel), marjoram, and thyme.

Linalool (1) is a monoterpene whose carbon skeleton is seen to be composed formally of two isoprene units. Its biosynthetic assembly involves two biochemically reactive isoprene analogues, prepared in turn from three molecules of acetic acid by way of the intermediate mevalonic acid (5). These C5-components are themselves converted via multiple reaction steps into linalool (1).
For details see “Biosynthesis of Linalool”.

Methyl chavicol (3) belongs to the phenylpropanoid family, whose members are derived from phenylalanine (11).

In a first reaction step, the enzyme phenylalanine ammonia lyase (PAL) catalyzes the cleavage of ammonia, with formation of cinnamic acid (12). Starting from cinnamic acid, the C3 side chain is modified and/or hydroxyl groups are introduced oxidatively into the phenyl ring, the latter in turn being methylated in a stepwise fashion.
For details see “Biosynthesis of Methyl Chavicol (Estragole)”.

I wish to express my thanks to Sensient Essential Oils, Inc., of Bremen, Germany, for samples of the various basil oils. Thanks also to G. Katzer of the Humboldt-Universität Berlin for the rights to publish his beautiful plant photos. In addition, Katzer’s informative Web page greatly simplified the work of researching this article. I am grateful to Dr. H. Bauer, Schering AG, Berlin, Germany, for valuable suggestions, and also to T. Kolrep of the Free University of Berlin for help and patience in the recording and interpretation of the GC/MS spectra.