The Deutsche Bunsen-Gesellschaft für Physikalische Chemie e. V. (DBG, German Bunsen Society for Physical Chemistry) presented several awards at the Bunsentagungen conference, the annual meeting of the Society, in Leipzig, Germany, on May 17–19, 2012, where the prize winners presented a lecture.

The van’t Hoff Prize was established in 2008 by Gerhard Ertl in remembrance of the first Nobel Prize winner in chemistry, Jacobus Hendricus van’t Hoff. The prize is awarded on a triennial basis to a chemist who has made an outstanding and sustained contribution to the field of physical chemistry. The prize consists of a silver medal, a certificate, and € 20,000. This year’s prize was split equally between Professor Gerard Meijer, Fritz-Haber Institute of the Max-Planck Society, Berlin, Germany, and Professor Frédéric Merkt, ETH Zurich, Switzerland.

Meijer receives the award in recognition of his important contributions to the manipulation of dipolar molecules through the Stark effect, especially its deceleration for producing ultracold molecular species with numerous potential physical, chemical and technical applications.

Frédéric Merkt received his degree in chemistry in 1988 from ETH Zurich and his Ph.D. in 1992 from Cambridge University, UK. He worked as a postdoctoral researcher at the Université de Paris-Sud, Orsay, France and at Stanford University, USA. In 1992, he joined the faculty at Oxford University, UK, as a junior research fellow and in 1995, returned to ETH Zurich as an assistant professor. He became a full Professor there in 1999, where he investigates the properties of high Rydberg states of atoms and molecules using laser spectroscopy in the vacuum ultraviolet (VUV), the extreme ultraviolet (XUV) and the Terahertz (THz) range. He is also co-author of the Handbook of High-resolution Spectroscopy, with Martin Quack, ETH Zurich.

Merkt receives the award for his fundamental experimental and theoretical contributions to understanding the spectroscopy and dynamics of molecular Rydberg states and molecular ions, as well as to control the movement of paramagnetic species by means of deceleration through the Zeeman effect for the production of ultracold systems.

This prize was established in memory of Walther Nernst, Fritz Haber, and Max Bodenstein. It is awarded annually to a young scientist who has made outstanding scientific achievements in physical chemistry. The prize was awarded to Professor Matthias Kling, Max Planck Institute for Quantum Optics, Garching, Germany, who presented a talk on using laser waveform to control chemical reactions, such as control of molecular rearrangement by the waveform of a carrier-envelope phase stabilized few-cycle laser pulse.

Matthias Kling studied physics at Georg-August University, Göttingen, Germany, and gained his Ph.D. in physical chemistry and laser spectroscopy there in 2002. At the same time, he studied laser physics at the Friedrich-Schiller University, Jena, Germany. He did postdoctoral research in the groups of Professor Michael Buback, University of Göttingen, Germany, Professor Charles Harris, University of California, Berkeley, USA, and Professor Marc Vrakking, FOM Institute for Atomic and Molecular Physics (AMOLF), Amsterdam, The Netherlands. Since 2007, Kling has been a group leader at the Max Planck Institute of Quantum Optics, where his group is part of the Laboratory for Attosecond Physics of Professor Ferenc Krausz. Since 2009, Kling also holds an assistant professorship at Kansas State University in Manhattan, USA, and in 2011 he became a visiting professor at the King-Saud University in Riyadh, Saudi Arabia. 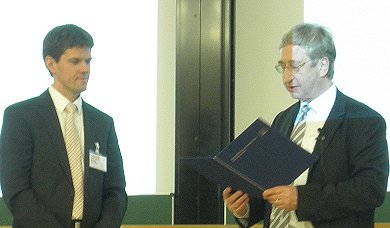 This prize is awarded by the DBG together with the Gesellschaft Deutscher Chemiker (GDCh, German Chemical Society) for research into the history of scientific instruments. Professor David Pantalony, Curator, Physical Sciences and Medicine at Canada Science and Technology Museum, and Adjunct Professor, History Department, University of Ottawa, Canada, receives the prize this year. His talk was entitled Rudolph Koenig’s Acoustical Workshop in Nineteenth-Century Paris and discussed Koenig’s role in making musical instruments and understanding acoustics.

David Pantalony studied neuropsychology at Queen’s University, Kingston, Ontario, Canada, before gaining a Master’s and Ph.D. in the history of science at the University of Toronto, Canada. He worked as a postdoctoral fellow at the Dibner Institute, Massachusetts Institute of Technology, USA, and as a Curator at Bakken Museum, Minneapolis, USA, before taking up his current position in 2007. 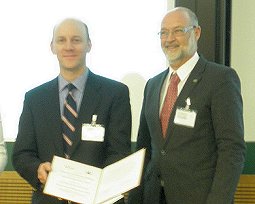 This prize is awarded to young researchers under the age of 35 for outstanding scientific achievements in the field of applied physical chemistry. This year’s winner Dr. Eva Mutoro, BASF SE, Ludwigshafen, Germany, gave a talk on in situ studies of model-type solid state electrodes for solid oxide fuel/electrolyzer cells, membranes, and sensors.

Eva Mutoro studied chemistry at the Justus-Liebig University, Giessen, Germany, and gained her Ph.D. in the field of solid state electrochemistry in the group of Professor Jürgen Janek. In 2010, she began postdoctoral research at the Massachusetts Institute of Technology, USA, in the Electrochemical Energy Laboratory with Professor Yang Shao-Horn. At the beginning of this year, she took up a staff scientist position at BASF. 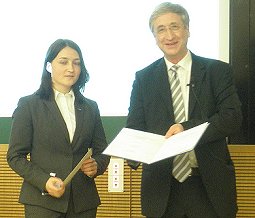