Professor Bert Weckhuysen (center), Utrecht University, The Netherlands, has received the International Catalysis Award of the International Association of Catalysis Societies (IACS) for his pioneering development and use of spectroscopic methods to investigate heterogeneous catalysts at the micrometer and nanometer scale during their activation and function.

The award was presented at the 15th International Congress on Catalysis (ICC 2012) in Munich, Germany, where Weckhuysen delivered an award lecture called “Cataysis Live and Up Close: Heterogeneities in Space and Time”. He began by saying that catalyst researchers are like detectives, always searching for who did it. 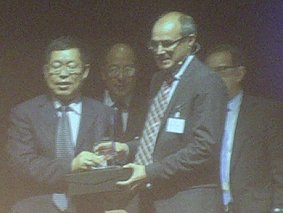 Professor Bert Weckhuysen received his master degree in chemical and agricultural engineering from Leuven University, Belgium. After obtaining his Ph.D. from the same university in 1995, he worked as a postdoctoral fellow with Professor I. E. Wachs at the chemical engineering department of Lehigh University, USA, and with Professor J. H. Lunsford at the chemistry department of Texas A&M University, USA. From 1997–2000, he was a research fellow of the Belgian National Science Foundation working at Leuven University. Since 2000, Weckhuysen has been a full professor of inorganic chemistry and catalysis at Utrecht University, the Netherlands. In 2011, he received the Paul H. Emmett Award in Fundamental Catalysis from the North American Catalysis Society, and he is one of the chairmen of the Editorial Board of ChemCatChem.

Weckhuysen’s research focuses on the development of structure-activity relationships and expert systems in the field of heterogeneous catalysis and materials science with special emphasis on the development and use of advanced in situ characterization techniques.