From fundamental understanding to catalyst design and novel processes was the theme of the congress. The field of catalysis shows dramatic progress. Catalysis will remain one of the key technologies leading to sustainability in the synthesis of energy carriers and chemicals. 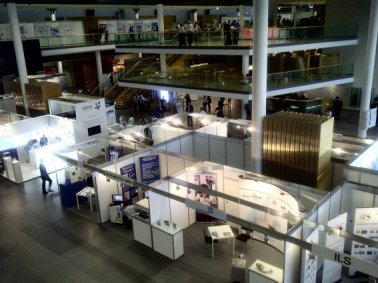 ICC 2012 had about 2,000 attendees from 57 countries at the International Congress Centre in Munich, Germany, last week.

Professor Avelino Corma, Universidad Polytechnica de Valencia, Spain, said that we continue trying to understand the catalytic phenomena to be able to design catalysts with well-defined single and multiple catalytic sites. However, techniques to look at the active sites and tools to make the material we need are becoming better, which allows us to design multistep catalysts for catalysis of multistep reactions. The idea is that processes that occur in a number of steps, where in each step the products need to be separated and purified, can be done in one step. This saves energy and by this is better for the environment.

Professor Walter Leitner, RWTH Aachen, Germany, stated that biomass conversion is an example of where it is most obvious that there is not a single technology that can solve all problems. It is more a combination of the various techniques and disciplines. Looking at industry and process development, there is still a big gap between the way things are carried out in homogeneous catalysis, heterogeneous catalysis and biocatalysis. Fundamental understanding and innovation in processes are necessary. There is a large opportunity here to cross the boundaries of the individual disciplines.

Evonik and BASF see increasing trends for catalysis use in industry in the upcoming raw material change and chemistry for energy conversion. Crude oil is near its peak, use of natural gas is increasing, and the chemical industry is under enormous pressure to save raw materials or to replace them with cheaper ones. Cheaper raw materials are normally less reactive and that’s why they have to be activated by a catalyst.
The second field, and that is a rapidly growing one, is chemistry for energy conversion. Adsorbent materials which are pre-stages of catalysts are of great importance as well as, e.g., electrocatalysts for fuel cells.

Energy efficiency and yields are not where they will have to be in the future. Hard work in the laboratory and innovations are needed here. Also funding is very important. 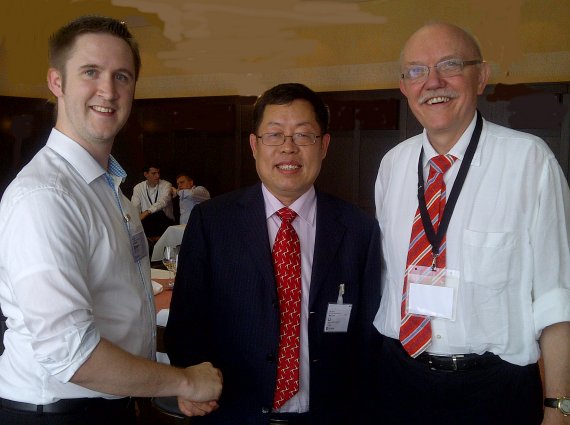 Editorial Board members of ChemCatChem met during the ICC 2012 to discuss the future of the journal and celebrate its excellent second Impact Factor of 5.207.
(left to right) Dr. Michael Rowan, Deputy Editor, Professor Can Li, Dalian Institute of Chemical Physics, China, Dr. Peter Gölitz, Editor-in-Chief, (in the background) Guido Kemeling, Editor-in-Chief ChemSusChem, and Professor Gabriele Centi, University of Messina, Italy.

During the conference, Professor Bert Weckhuysen, the Netherlands, received the International Catalysis Award for his work on heterogeneous catalysts, Professor Graham J. Hutchings, Director of the Cardiff Catalysis Institute, UK, received the Heinz Heinemann Award for his work on AuPd nanoparticles. AuPd nanocrystals show remarkable activity as redox catalysts.
The Otto Roelen Medal 2012 was awarded to Professor Javier Pérez-Ramírez, ETH Zurich, Switzerland, for his outstanding contributions to the field of catalysis, which also have strong industrial relevance, such as his development of novel catalysts for the gas-phase oxidation of hydrogen chloride (Deacon Process). The Alwin-Mittasch Prize 2012 was shared by Professor Graham J. Hutchings, Cardiff Catalysis Institute, UK, and Professor Takashi Tatsumi, Tokyo Institute of Technology, Japan. Both researchers are recognized for their work extending both the fundamentals of catalysis and their application in industrial practice. In particular, Graham Hutchings was honored for his innovative research in the field of precious metal catalysis, and especially for his pioneering work on gold catalysis. Takashi Tatsumi was honored for the discovery of novel titanium zeolites and their transfer into industrial oxidation processes.