The 6th Spanish-Portuguese-Japanese Organic Chemistry Symposium (6th SPJ-OCS) was held in the beautiful and culturally rich city of Lisbon, Portugal, from July 18–20, 2012. These Organic Chemistry Symposia were first organized by Spain and Japan starting in 1997 with the 1st SJ-OCS taking place in Alicante, Spain. Since 2006 Portugal is also responsible for their organization.

The 6th SPJ-OCS, held at the Universidade de Lisboa, Faculdade de Ciências and chaired by Professor Amélia Pilar Rauter, had 200 participants, including experts from academia and industry, young researchers, and students. Topics in Organic Chemistry such as synthesis, microwave assisted reactions, environmentally friendly methods, homogeneous and heterogeneous catalysis, molecular design, medicinal chemistry, natural product chemistry, materials chemistry, and process chemistry were the subject of 126 posters and 24 plenary lectures. It was part of the celebration of the centenary of the Portuguese Society of Chemistry which was founded on 28 December 1911. A special issue of the European Journal of Organic Chemistry (EurJOC) will be dedicated to the centenary of the Portuguese Society of Chemistry by focusing on the 6th Spanish-Portuguese-Japanese Organic Chemistry Symposium. Lecturers were invited by the editors of this special issue to submit a paper, aiming to bring together expertise in organic chemistry from the countries that participated in the meeting.

The Portuguese culture was associated with this scientific event in various moments. The opening session started with a musical moment by the group “Open Strings” composed by the musicians Diogo Tavares (classical guitar, viola), Marcos Lázaro (violin) and Ricardo Marques (Portuguese guitar), who played three songs in a typical Portuguese style, two of them their own composition.

The opening session was presided by Professor António de Vasconcelos Tavares, Vice-rector of the University of Lisbon in representation of the Rector. In it, Professor Leonor Parreira, the Secretary of State for Science, mentioned the importance of the experimental sciences and in particular of Organic Chemistry for Portugal. A highlight of this session was the tribute given to Professor Bernardo Jerosh Herold, Professor Jubilado of Instituto Superior Técnico da Universidade Técnica de Lisboa, for his decades in research and teaching Organic Chemistry in Portugal.

A cultural moment followed the welcome reception with the exhibition of the “Portuguese Karate-Do Wado-Ryu Association”, sponsored by the Embassy of Japan, that comprised a demonstration of the Japanese martial arts Bujutsu and Wado-Ryu Jujutsu Kempo. Then, a concert given by the “Associação Académica Orquestra de Acordeões do Cartaxo” (AAOAC, Academic Association Orchestra of Accordions of Cartaxo) was offered to the participants.

One of the highlights of this meeting was the first day session dedicated to EurJOC and ChemPubSoc Europe, chaired by Dr. Haymo Ross, Editor-in-chief of EurJOC. The session started with a keynote lecture on EurJOC and ChemPubSoc Europe by Dr. Haymo Ross, and was followed by three scientific lectures held by Spanish, Portuguese, and Japanese scientists, selected by their scientific contributions to this journal. 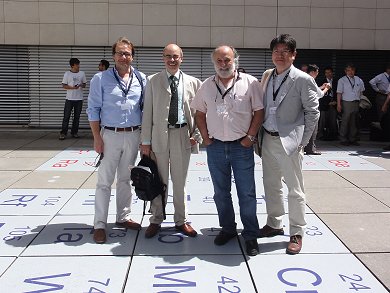 The immediate past President of the International Union of Pure and Applied Chemistry (IUPAC), Professor Nicole Moreau, gave a keynote lecture where she explained what IUPAC is and talked about its role to facilitate the advancement of research in the chemical sciences through providing tools for international standardization, and to unite academic, industrial, and public sectors of chemistry in a common language. In particular she addressed IUPAC’s contribution to the implementation and organization of the International Year of Chemistry (IYC2011) and commented on the importance of the future affiliation of countries in Africa and South America, where the Union is not well represented yet. 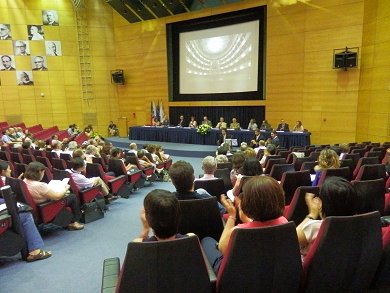 The commission of honor was presided by his Excellency the President of the Portuguese Republic, who always gives his particular attention to the scientific events relevant to the development of the country. It also included the Minister for Science and Education, the Minister for Health, the Secretary of State for Science, the President of the Council of Rectors of the Portuguese Universities (CRUP), the Rectors of the Portuguese Universities that were represented in the meeting, the President of the European University Association, among other entities. Also experts from other related disciplines were invited, namely Professor Beining Chen, Head of PCBNet – Stem Cells, Prion Protein and Alzheimer´s Disease: A Prion Chemical Biology Network, Professor Paula de Macedo, scientific advisor of Revista Portuguesa de Diabetes, and Professor Isabel Santos, Director of the Unit of Chemistry and Radiopharmaceutical Sciences of Instituto Tecnológico Nuclear, Instituto Superior Técnico.

The participants of the 6th SPJ-OCS conference in Lisbon, Portugal.

The conference dinner, in which Fado, the Portuguese song, was sung by a young group of singers and guitar players under leadership of Miguel Marques da Gama, was co-sponsored by Turismo de Portugal. It was served at Casa do Leão located in the Castle of São Jorge, located atop the highest hill in the center of the city. The hill was employed in early times by Celtic tribes, and Phoenicians, Greeks, and Carthaginians, have probably also lived where the castle now stands. The castle has also been a royal residence and is now one of the main historical and tourist sites of Lisbon where visitors can enjoy one of the most wonderful views of the capital of Portugal.

Finally an excursion to Sintra was organized in the social program, which included a visit to the Pena National Palace, one of the Seven Wonders of Portugal that stands on the top of a hill above Sintra, a UNESCO World Heritage Site. The palace constitutes one of the major expressions of 19th century Romanticism in the world, which displays a unique and intentional mix of Gothic, the Portuguese Manueline, Islamic and Renaissance styles.

After Sintra, a visit to Cabo da Roca, the most occidental point of continental Europe, with high fells and the immense Atlantic Ocean, demonstrated the beautiful landscape of this part of the world. 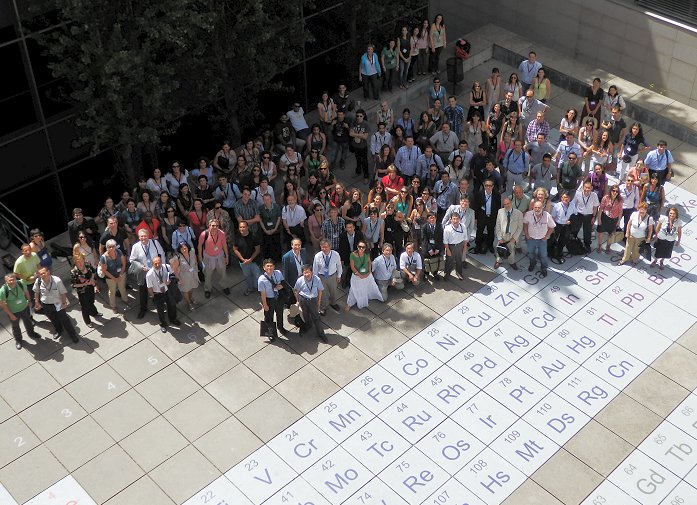 6th SPJ-OCS participants pictured on the periodic table installed at the entrance of the Department of Chemistry and Biochemistry, Universidade de Lisboa, to celebrate the centenary of the Faculty of Sciences in 2011.

Establishing the alliance of science and the Portuguese culture, this meeting, with a unique scientific program, clearly demonstrated the importance of organic chemistry and related topics to find innovative solutions for many problems of the modern society. It brought together experts from academy and industry, young researchers and students, from many countries, that shared the most recent findings and were given new opportunities and challenges in the field.

In the Closing Session the 7th SPJ-OCS was announced, it will be held in 2015 in Sevilla, Spain, organized by Professor Rosario Fernández-Fernández.