Aplyronine A (pictured), a macrolide isolated from the sea hare Aplysia kurodai, possesses antitumor activity as it depolymerises actin, a major regulator of cell motility and cell division. Nevertheless its exact mechanism of action is unknown. 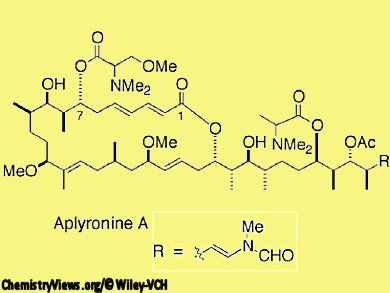 Masaki Kita, University of Tsukuba, Japan, and colleagues developed a fluorescent derivative which allowed them to clarify the effects of Aplyronine A in living cells.
By hydrolyzing the macrolide to produce C34 aldehyde and condensing the latter with an oxyamine, the scientists produced tetramethylrhodamine conjugated Aplyronine A. The latter retained the biological functions of the parental compound and, when incubated with cancer cells, it promoted the disassembly of the actin cytoskeleton as well as the inhibition of cell adhesion. This effect was most likely attributable to the inactivation of focal adhesion kinase.