Prignitzer Chemie GmbH was established at Wittenberge, Germany, in 1991, and is a member of the Hamburger-Cremer Group. It currently employs 60 men and women, and processes a total of roughly 25,000 (metric) tons of vegetable oils and fatty acids annually.

The ChemViews magazine author Professor Klaus Roth spoke with Prignitzer Marketing Director Wolfgang Krüger (left) and Chief Executive Rolf-Ekkehard Kühn (right) in 2008 in conjunction with his Chemie in Unserer Zeit article, about the processes and challenges involved in becoming a certified producer of kosher and halal materials.

Could you describe for us briefly the chemical basis for Prignitzer Chemie GmbH?

Kühn: We rely on two principal product lines. On the one hand, we purchase vegetable oils in Southeast Asia, which we then cleave hydrolytically at high pressure (50 atm) to give glycerin and fatty acids. These we subsequently separate by distillation, our primary trade being in unsaturated C18–C20 fatty acids.

On the other hand, we also buy short-chain (C6–C10) fatty acid mixtures, and these we again separate. The pure fatty acids are utilized as flavoring and fragrance agents. In addition, we also prepare so-called MCT (middle-chain triglyceride) oils by esterification of C6–C10 fatty acids with glycerin. These in turn find broad application in the food, cosmetic, and pharmaceutical industries.

How did you happen to become engaged in the production of kosher and halal materials?

Krüger: Some of our customers asked if we would be able also to supply our products in kosher quality. At first we were somewhat surprised by the question, since that represented completely new territory for us. We began by contacting the British certifying organization, the Federation of Synagogues, and later the Orthodox Union (OU), which in the meantime has become involved with our entire corporate group. They also handle certification of the tank farm in Rotterdam.

Herr Krüger, please give us some idea of what was actually involved in adapting your production processes to kosher quality output. What was it necessary for you to do, and what sorts of practical problems arose?

Krüger: To begin with, kosher production means purchasing only starting materials that are themselves certified as kosher. At first glance one would think that to be unproblematic in the case of vegetable oils, but the situation in detail is in fact more complicated, because a particular vegetable oil might not automatically be kosher. From the plantation in Southeast Asia to our doorstep, the production and transport of our raw materials is monitored continuously by the Jewish certifying organization, which includes, for example, overseeing the tankers utilized. Thus, in order to be granted a kosher certification, every single loading with the shipping company is examined to make sure that that batch of oil does not come in contact with non-kosher substances. The corresponding requirements are very strict, and the filling of every tanker is overseen directly by a rabbi.

In the same way, our tank farm in Rotterdam is continuously monitored, and every truck that comes here from the tank farm is sealed upon its departure. This seal must still be intact upon arrival here, and the identification number stamped into it is recorded in our log of shipments received. This log must be made available for every inspection of our operation, regardless of whether it has been announced in advance or not. The suppliers, seal numbers, and weight information are all subject to examination, and we must be able to prove without any gaps that we have processed exclusively raw materials certified as kosher.

What sorts of problems did it become necessary to overcome in the course of converting your production facilities?

Kühn: The most difficult problem for us to solve had to do with our 40-meter tall distillation tower (Fig. 1) in which, for example, fatty acids are separated under vacuum at temperatures up to 250 °C. It is necessary categorically that, prior to its use in kosher production, every piece of apparatus be put through a process of “koshering”, i.e., made fit for use with kosher materials. This involves a very precise set of mandatory instructions, consisting primarily of thorough cleaning and “cooking out” with water. But a 40-m distillation column filled with a Sulzer structured packing most certainly does not lend itself to “cooking out” and subsequent drying; the very idea is simply absurd. A distillation column is filled with Sulzer packing in order to improve its separating power. Here the packing consists of a regular, perforated-metal fabric. Therefore, working together with the certifying agency, a “cleansing” approach had to be found that was acceptable to both parties. 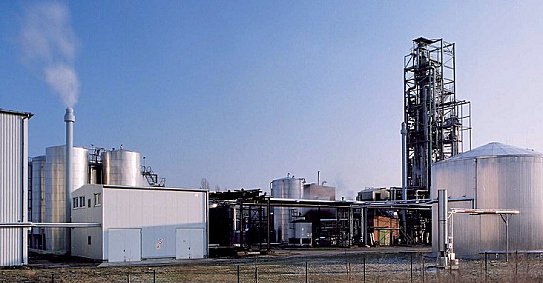 I should perhaps also mention that the rabbis who have looked after us in recent years have either themselves been trained chemists, food chemists, or process engineers, or else they have been accompanied by such experts. In other words, the inspectors truly understand our craft, which greatly simplifies a search for sensible solutions.

In the present case, our distillation column was operated, over a period of several weeks, exclusively with kosher vegetable oil as the feedstock, at a feed rate of roughly 2 tons per hour. This preliminary output could of course not be labeled as kosher. However, given the high temperatures involved and the long flush period, it was considered safe to say in the end that the distillation column had been rendered completely free of non-kosher contaminants.

Krüger: I might add that a procedure like this needed only to be carried out once. Our application for a kosher seal meant at the time that we had to prepare the entire plant, from top to bottom, for kosher production. That is what we did, and since 1995 all of our products have qualified for kosher status.

Can you give us a sense of what an inspection of this sort by a rabbi is like?

Krüger: Kosher certification is not a one-time event, but rather an ongoing process in which one is accompanied by a rabbi. Since we have always worked exclusively with vegetable oils, and our suppliers also provide us with oils that are kosher, there has never been a major problem on the raw material side. In addition to the difficulty with our distillation column there were certain technical details that needed to be clarified. For example, only kosher-certified lubricants can be used. But working in cooperation with the certifying agency, clearing up of the details was accomplished without any problems, and did not actually introduce any real hurdles for us.

Kühn: Nevertheless, the rabbi surprised us during the preliminary review with a request for a glass of boiling hot coolant water out of the distillation facility. After the water had cooled off he tasted it, and it apparently lived up to his expectations. Given that we had never come up with the idea of drinking some of our own cooling water, we asked—somewhat puzzled—why he had done that. His answer made sense immediately: He was checking to see if the cooling water tasted or smelled of tallow!

Even after you acquired your certificate there have still been additional checks. How does a subsequent control of this sort proceed?

Krüger: Each certificate is valid only for a period of one year. Over this period we are always subject to inspection at irregular intervals, sometimes unannounced, at which point the facilities are once again examined, and any technical changes discussed. Over the years this has become routine, and our certificate has been renewed every year without any objection.

All your products have also been certified as having halal status. Why did you bother to achieve this end, and what extra requirements was it necessary for you to fulfill?

Kühn: Here again, the starting point was customer desire. The requirements for kosher and halal certification are actually similar. Our suppliers of vegetable oils in Southeast Asia in every case already have halal certification. The requirements with respect to our own facilities correspond to those for kosher production, but in the case of halal one very important additional concern is an absolute prohibition of ethanol. We work together with the certification organization Halal Control in Rüsselsheim, Germany, and in conjunction with their representatives we have examined all of our production steps with respect to the potential for ethanol formation.

I should emphasize here as well that our discussions have always included not only an Islamologist, but also a Ph.D. chemist, so that professional dialog could be conducted in a competent way. I can say fundamentally that collaboration with all the certification agencies, whether Jewish or Muslim, has always been very constructive. The situation at the outset actually demanded this as well, because believers insist that products identified as kosher or halal are guaranteed impeccable, and they expect from us as manufacturers and certifying agencies that together we get this right. And by joint efforts and mutual understanding that is something we have always achieved.

Of course, no surveillance is always perfect, and at least theoretically you might on some occasion have mixed in non-kosher vegetable oil, which was perhaps cheaper. That’s something that could never be proved through analytical chemistry.

Krüger: From a strictly theoretical standpoint that would be possible, but our cooperative relationship with the Jewish and Muslim certifying authorities is based very strongly on trust, including the personal trust of our counterparts. It would be foolish to put this trust at risk simply for a bit more profit. Don’t forget: If we were to once abuse this trust, and our partners were to discover it, we as individuals—and the company as a whole—would lose all hope of certification over a long period of time. And that punishment would be entirely justified! We trust fully in our partners, and they can expect the same reliability from us. You know, every visit ends with a handshake, and with us that means something!

Herr Krüger, Herr Kühn, thank you for this heart-to-heart conversation.