Dr. Mamoru Tobisu, Osaka University, Japan, has received the Merck-Banyu Lectureship Award (MBLA 2012) from Merck Research Laboratories, USA, and Banyu Life Science Foundation International, Japan. The award was established in 2004 to encourage young scientists. It is bestowed annually on a Japanese chemist less than 40 years of age, who has made as outstanding contribution in the field of synthetic organic chemistry.

Tobisu is recognized for his work developing a series of catalytic reactions that can directly transform inert carbon‒oxygen, carbon‒cyano and carbon‒silicon bonds into an array of useful compounds. These methods enable the functionalization of methoxy and cyano groups during the latter stages of multi-step synthesis.

The award was presented at the Banyus Sapporo Symposium, Sapporo, Japan on July 6, 2013.

His current scientific interests include organometallic species and the development of new catalytic methods.

The awardee will travel through Europe and the US to present his award lecture: 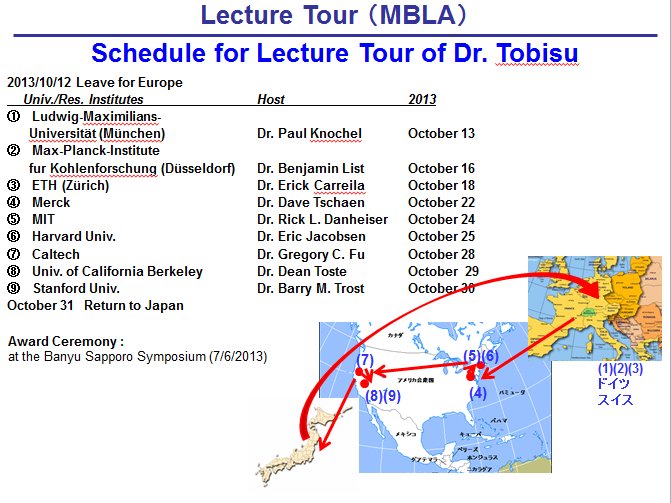