8. What Does Quinine Do To Counteract Malaria?

To be able to understand the curative effects of quinine with respect to malaria it is necessary to first look briefly at the cause of the disease.


Malaria
Malaria is an umbrella term for diseases caused by various single-cell parasites of the genus Plasmodium, and transmitted by Anopheles mosquitoes. The pathogen is associated with an especially complex life cycle. We will consider it to commence when an infected female anopheles mosquito bites a person. A form of the pathogen then makes its way from mosquito saliva, through the victim’s bloodstream, and into cells of the liver. In the liver it multiplies, to some extent simultaneously generating a dormant form of the parasite (the hypnozoite), which after months or even years may again become active. Meanwhile, within only a few days, a multitude of the more usual form of the pathogen (the merozoite) passes from the liver back into the bloodstream, subsequently attacking red blood cells and initiating a series of asexual multiplication cycles, though some merozoites are transformed instead into an immature sexual variation, the gametocyte.

Now, if another mosquito stings a person already infected with Plasmodium, the mosquito acquires not only human blood, but also gametocytes, which reproduce sexually within that insect. Finally, the resulting pathogen accumulates once more in the salivary glands of the new Anopheles mosquito, and with its next sting it may infect a human. The cycle is thus closed [56].

The real danger to humans with respect to Plasmodium involves potential destruction of up to 80 % of an individual’s red blood cells. The intruding pathogen splits human hemoglobin into heme and globin (a protein) in a quest to satisfy its own demand for amino acids, which it acquires by decomposition of the globin. The resulting large quantity of the free red-blood pigment heme is toxic to Plasmodium. However, for protective reasons, Plasmodium has developed its own unique defense mechanism involving the aggregation of heme through hydrogen bonding to form layers, which then crystallize out as hemozoin (Fig. 9). After this biomineralization, all the iron centers in the heme are coordinatively saturated and the heme bound in the crystalline hemozoin is no longer toxic [46–48]. 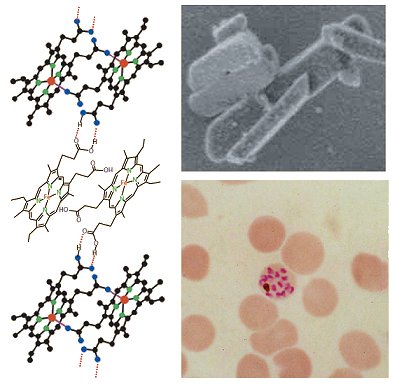 In terms of the human host, an infection of this sort can ultimately prove lethal: the enormous loss of red blood cells, mentioned above, will lead to acute anemia and the surfaces of infected blood cells are altered such that they readily obstruct the victim’s capillaries, especially in the brain.

Quinine as an Antimarial Agent
Quinine’s pharmacological activity as an antimalarial agent is based on hindrance of the biomineralization of heme, thus inhibiting formation of crystalline hemozoin. The precise mechanism remains unclear: that is, whether quinine bonds to the dimeric heme complex and thus prevents further aggregation, or if it creates a sort of protective layer over the rapidly growing crystal surface [49]. Regardless of mechanistic details, in an infected blood cell treated with quinine the Plasmodium pathogen continues to produce such a high concentration of heme through hemoglobin degradation that it ultimately ensures its own demise.

Quinine, which is to say cinchona bark, was for centuries the only effective antimalarial agent known. In 1934, chloroquine (Resochin), the first highly successful synthetic agent for combating the disease was discovered. This was followed in 1940 by sulfadoxin/pyrimethamine, and in the 1970s by mefloquine (Lariam) and artemisinin [50]. As a result, quinine was almost completely displaced from the market of malaria therapeutic agents. In the meantime, however, the pathogen has developed significant resistance to these newer compounds, so drug combinations are commonly used for both prophylaxis and therapy. In difficult cases where these still prove ineffective, however, quinine is even today administered, to some extent in combination with other ingredients.

“… in the event that it is needed“

Historically, the importance of quinine as a prophylactic and therapeutic agent against malaria increased with each new conquest by the Europeans in Africa, Asia, and America. It was standard practice for all the colonial powers to provide their military personnel, government officials, trade representatives, and missionaries with quinine in the form of either powder or tablets.

Countless additives were tried over the years in an attempt to mask quinine’s exceedingly bitter taste. Here the British proved especially successful, when upon their conquest of India they began supplying quinine doses dissolved in water, to which was added gin and lemon. The resulting “tonic” was regarded as a general-purpose “restorer” and “strengthening agent” (roborant), thus becoming the precursor of a still widely popular cocktail, the “gin and tonic”.

Tonic water
In Germany, the idea of tonic water is inextricably linked with the name Schweppes. Around 1780, the watchmaker Johann Jacob Schweppe (1740–1821) developed a process for adding carbon dioxide to water, and then bottling the resultant liquid. He soon patented the procedure, and shortly thereafter established, in Geneva, the very first facility for preparing soda water (carbonated water) on a commercial scale. In 1792, together with partners, he established a second bottling plant in London: Schweppes. Johann Schweppe himself left the company in 1802, but the name persisted [51].

His successors further developed soda water in England, and after ca. 1830 made available a “water with flavoring”, Indian Tonic Water. British colonial officials stationed in India are said to have reacted with enthusiasm to carbonated water containing quinine, regarding it as a pleasanter way of consuming the drug. Whether that particular Indian Tonic Water provided any prophylaxis or curative powers with respect to malaria would seem questionable, however.

Today’s Schweppes Indian Tonic Water contains 68 mg of quinine per liter. To ingest the effective oral dose of quinine of 2 g per day, for a 70 kg—154 lb—man, it would be necessary to drink 30 liters (nearly 8 gallons!) of Schweppes Indian Tonic Water every day [52]. That would, of course, be almost impossible, even without—let alone with—gin [53].

Tonic water is a soft drink, and not a particularly low-calorie example. One liter of Schweppes Indian Tonic Water represents 380 kcal (www.schweppes.de), or 90 kcal per 8 fluid ounce serving (www.schweppesus.com). In other words, one daily “dose” of 30 L, corresponding to the required amount of quinine effective against malaria, would be equivalent to 11,400 “calories” (kcal)! Even in one of the mountain stages of the Tour de France, a professional cyclist burns up “only” about 8,000 “cal.”

Not only Schweppes, but also various French entrepreneurs took advantage of the possibility of introducing quinine to add a bitter note to their products. Any number of varieties of “bitters” were once flavored with cinchona bark, their names typically pointing clearly toward their alleged efficacious powers. But only Quinquina Dubonnet (today simply Dubonnet) and Kina Lillet (today Lillet Blanc) have survived, and are still consumed today.

The basis for Quinquina Dubonnet is wine, to which alcoholic extracts of cinchona bark and other herbs are added. The Frenchman Joseph Dubonnet developed this aperitif in 1846. On the basis of its quinine content it was supposed to function as a malaria prophylaxis for French Foreign Legionaires in Africa.

Lillet Blanc (previously known as Kina Lillet) is an aperitif based on white wine, to which has been added alcoholic extracts of citrus fruit and cinchona bark. As with Dubonnet, Kina Lillet and related aperitifs appeared in the context of the French conquest of North Africa, intended to supply quinine to the Legionaires in a more agreeable form.

Lillet Blanc became popular again in 2006 as a result of the James Bond film “Casino Royal”, in which the star Daniel Craig orders a Vesper Martini at the poker table. The recipe as originally described in Ian Fleming’s 1953 novel can no longer be properly mixed, as in 1986 the quinine content of Lillet Blanc was significantly reduced. Resourceful bartenders know how to make up for the missing bitterness, however, with a dash of angostura or orange bitters.

Today, quinine is permitted in drinks exclusively as an aromatic flavoring agent, where it is subject to strict limits and restrictions. The German flavorings law (Aromenverordnung), for example, specifies a maximum quinine content for spirits of 300 mg/kg, and for nonalcoholic beverages of 85 mg/kg [54].

Even these amounts are potentially dangerous for certain people, though. The German Federal Institute for Risk Evaluation (Bundesinstitut für Risikobewertung) recommends as a precautionary measure, for example, that pregnant women and patients taking medication that inhibits blood clotting refrain entirely from the consumption of quinine-containing beverages, as interactions are possible with these drugs, and newborns may also exhibit adverse effects.
Given this health advice, bitter beverages with quinine must, in Germany, be explicitly labeled as “quinine-containing”, and also similarly characterized on beverage lists within the food service industry.

The isolation (1820), proof of structure (1908), and synthesis (1944) of the principal component of cinchona bark all represented distinct triumphs for chemistry. So far, every effort at developing the crowning achievement, however—an economical industrial-scale synthetic route—has fallen short, nor is one in sight. So now, as always, we are left to rely upon the world’s best quinine synthesizer: the cinchona tree.

Still, the tremendous research efforts directed at quinine—on the part of many chemists—have paid off in many diverse ways. In 1853, Louis Pasteur was thus able for the first time to separate racemic tartaric acid into its two enantiomers thanks to aid from the chiral base quinine. This remains today a common method for resolving racemates.

In 1856, William Perkins’ bold attempt to prepare quinine by oxidation of aromatic amines seemed a complete failure; he didn’t obtain any quinine at all. But instead, he isolated the first synthetic dye for textiles. This event marked the advent of the coal-tar dye industry, and in turn, the enormous chemical/pharmaceutical industry that developed from it.

Today, quinine and other components of cinchona bark (cinchona alkaloids) are used not only as pharmacological agents, but also as chiral catalysts and as building blocks in organic synthesis [55]. Last but not least, we continue to enjoy quinine as the bitter component in various beverages and cocktails. There are indeed many reasons for us to express gratitude to the cinchona tree.

Acknowledgements
In our becoming familiar with this extensive and scientifically demanding field, and in preparation of our manuscript, numerous colleagues have stood by to assist us. Special thanks go to Onur Köksal, Harry’s New York Bar in the Grand Hotel Esplanade, Berlin; Dr. Gabriele Pradel, RWTH Aachen; Dr. Robert Vogt, Botanical Museum of the Freie Universität Berlin; and Dr. P. Winchester, also of the Freie Universität Berlin. The starting point for our article was a visit to the Chininfabrik (Quinine Factory) Buchler in Braunschweig. We wish to express our special gratitude to T. W. Buchler, Dr. R. Böhm, A. Perrin, and Dr. C. von Riesen for their hospitality and support. 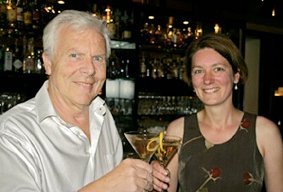 The authors, shown in the course of their altruistic self-experiments with tribologically differently prepared quinine-containing mixtures at Harry’s New York Bar.
Left, Prof. Dr. Klaus Roth, with a shaken Vesper Martini, is on the faculty of the Free University of Berlin, Germany, and permanent author of this series.
Right: Prof. Dr. Sabine Streller, with a stirred Vesper Martini, is a faculty member for the Teaching of Chemistry and Biology at the Rheinisch-Westfälischen Technischen Hochschule Aachen, Germany.

From Pharmacy to the Pub — A Bark Conquers the World: Part 1

The quinine-containing bark of the Cinchona tree is probably the most valuable drug the Americas gave the world.

From Pharmacy to the Pub — A Bark Conquers the World: Part 2

Interview with Thomas W. Buchler, the fourth generation of the Buchler family to occupy the position of chief executive officer at Buchler & Co., which is still today isolating quinine and other components from cinchona.

From Pharmacy to the Pub — A Bark Conquers the World: Part 3

The long way from the structure determination to the total synthesis is an exciting detective story.