Raphael Wagensonner, the 19 years old winner of the TUM DeSal Challenge, a competition to supply drinking water without the use of fossil energy, at low costs, and with minimum effort, talks to Dr. Vera Koester for ChemViews magazine about the challenges of designing, developing, and building his desalination plant and the plans to build a pilot plant that will be tested for a longer period in the Red Sea of Jordan.

Tell us a bit about the competition, please.

The purpose of the TUM DeSal Challenge is to tackle the increasing water scarcity by the desalination of sea water. Large amounts of sea water are already desalinated by plants that run with fossil fuels, especially in the gulf region. But for countries without major reserves of oil or gas, desalination plants, for example, those based on the “reverse osmosis” technology, are too expensive. Thus, the teams participating in the TUM DeSal Challenge have to design and build a desalination plant that is based on renewable energies.
These plants should be easy to construct and need barely any maintenance. And, of course, the amount of desalinated water and its quality are very important. Furthermore, the judges grade how innovative the proposed concepts are and how well the prototypes were engineered. 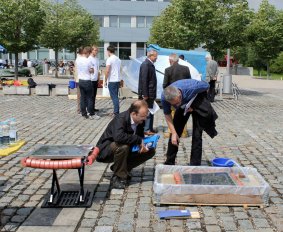 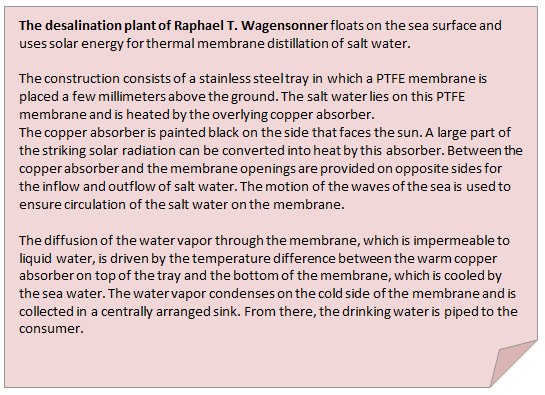 How did you hear about it?

From September 2012 to March 2013 I was studying in Amman, the capital of Jordan. For a lecture in hydrology I wrote a paper about water-vapor-gradient-driven thermal membrane distillation of sea water. I wanted to continue with my work on that subject, thus, I searched on the internet for an opportunity to do that. Eventually, I hit the competition’s home page and applied with my concept.

The geophysical situation of Jordan was one reason why I decided to do my semester abroad in this beautiful, but arid country. The day I arrived in Jordan was one of many hot days in the summer of 2012 without any tap water, and thus, I was confronted with that problem from the very first day of my stay. Even though Jordan has barely any surface and ground water resources, they do not desalinate sea water since they would have to import fossil fuels for the operation of, for example, a reverse osmosis desalination plant. Hence, I believe that it is the right approach for countries like Jordan to use the sun’s energy in order to run desalination plants.

How did you get the idea for your desalination plant? Did you have a supervisor to support you?

At the beginning of my studies at the university, the Deggendorf Institute of Technology, Germany, I became fascinated by the thermal potential that lies within the oceans. I wrote my first scientific paper about the temperature-gradient-driven conversion of thermal energy stored in the seas. About moisture transport, I learned in thermodynamics.

Professor Mnich who lectures thermodynamics at the Deggendorf Institute of Technology already supported me with my work about the temperature-gradient-driven conversion of thermal energy stored in the seas and thankfully continued with his supervision during the TUM DeSal Challenge 2013.


How time consuming was it to develop and build your desalination plant?

At the beginning I was working for a number of days intensively on the concept. I wrote a paper describing the desalination plant and added several drawings to enter the challenge.

In March, I received the note that my concept was accepted to the final of the competition at the end of June. I made some pre-tests to prove the concept and fine-tuned the drawings. After that, I started building the different components of my desalination plant. It took me many attempts and I often bought things that I finally didn’t use, but after a while – and a lot of work – I had the main components of my first prototype.

Even though this prototype couldn’t swim at that time and it stopped to desalinate water after a while, I realized that I still had more than a month left and no major problems to fix. I thought that the modification of one of the parts would increase the output significantly. Thus, I decided to build a second modified prototype at that time.

In the end it took me more effort to get the first prototype running properly, especially, due to several mistakes I made. Only a few days before the final, I installed the last components to both of the prototypes and was very happy when I could drink the first glass of desalinated water and the plant was swimming and had a continuous output. 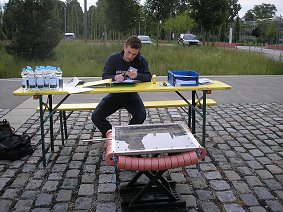 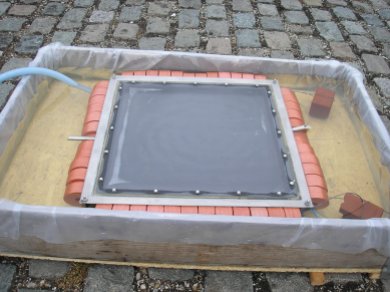 Writing the documentation, designing the poster, and the preparation of my presentation finally took place in the nights before the competition. With only a few hours of sleep I drove to the final of the competition in Munich on Friday the 28th of June early in the morning. That first day of the final was pretty exhausting because I had to present my desalination plant all by myself.

Because you were the only team existing of one person?

Yes.
The second day wasn’t that exhausting because the jury didn’t examine the plants anymore and I had the chance to see what the other teams had done.

During the two days of the final the teams were on the one hand competing, and on the other hand we were celebrating together that we had finally finished the construction of our desalination plants. I enjoyed this spirit a lot.

What do you think made your plant so successful?

The desalination plant consists of a single module. This module combines the heating of the sea water, the diffusion-based membrane distillation, and the, therefore, necessary cooling of the water vapor. Usually, thermal membrane distillation systems consist of three separate components, one for each of these tasks.
The plant is very thin and consists of only three vertically arranged layers. I think the simplicity is the greatest advantage of this concept.

What were major challenges?

In the beginning the concept was more sophisticated, but when it came to the construction of the plant I realized that I would have to simplify the module so that I would be able to construct it by myself. Most of the materials I bought from do-it-yourself stores and I sometimes had to change the drawings because I could not get the necessary materials. One of the greatest difficulties was the intersection between the membrane and the rest of the construction. I had to seal the junctions between these two parts in a way that it could be disassembled again for maintenance.

What did you enjoy most?

It is rewarding to design a desalination plant from the very beginning. There are so many aspects that have to be considered. It feels great when you get to know every part of your construction so thoroughly.

I was so happy when the plant desalinated sea water for the first time and this feeling was worth all the effort.

At the final I only had to put my plant into the pool and it started desalinating the water by itself and I could focus on the presentation of the concept. At that moment I knew that after nearly half a year of work I had designed and constructed a running desalination plant. To finish such a huge project is a great experience.


Do you have any further plans for your plant?

Fortunately, the concept I designed was awarded with the first place at the DeSal Challenge 2013, thus, this is a great chance to proceed with this project. Next semester I will make several tests on the prototypes in order to optimize the concept. My university supports me and currently we are in contact with the German Jordanian University in Amman in order to evaluate a cooperation. Probably in one or two years we will have a pilot plant built that will be tested for a longer period in the Red Sea of Jordan.

Would you recommend others to apply to participate in the next DeSal Challenge?

Tell us a bit about yourself, please? What are you studying?

I’m 19 years old and I grew up in Passau, a city in the south-east of Germany. My father is from that part of Germany, but my mother is originally from Syria. That is also why I feel attracted to the MENA region.

At the age of 16 I did an internship at a construction company in Abu Dhabi that erects offshore drilling rigs for oil exploration and production. The way that the foreign laborers were treated there on the construction site and the regardless exhaustion of our energy reserves, confronted me with the problems of our growing world. This experience made me study for a BEng in Resources and Environment at the Deggendorf Institute of Technology, Germany,  where I recently proceeded into the 5th semester.


And what do you do in your spare time?

In my spare time I love to go running with my club mates or mountain biking with my brother. During my semester abroad I liked hiking in the Wadis of Jordan and Palestine/Israel. In Jordan I started Karate and tried to cook something new at least every week. 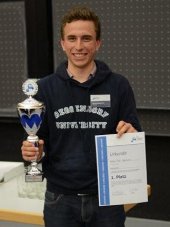 Raphael Tarek Wagensonner was born in Passau, Germany. After an internship at an construction company in Abu Dhabi, United Arab Emirates, he started studying Resources and Environment at the Deggendorf Institute of Technology, Germany. He spent one semester in Jordan studying and traveling. That is also when he started thinking about desalination and entered the TUM DeSal Challenge with his thermal membrane distillation plant.