Sodalite means sodium stone and it was given this name by Thomson in 1811. It has a cubic crystal structure with the space group P43n. The structure (pictured below) is characterized by the combination of silicon and aluminum atoms connected by oxygen bridges in cage-like frameworks, which in turn are packed to give a cubic structure. This framework has the composition Na6Al6Si6O24, but contains additional ions next to the cations in the enclosed cavities. Thus, the average stoichiometry of sodalite is increased by two moles of Na+ and Cl– to Na8Al6Si6O24Cl2. 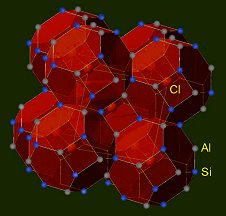 Lasurit, also called lapis lazuli, is a close relative of sodalite that was highly valued by the early civilizations of the Near East and in Egypt. In its sodalite cage, it contains radical anions of sulfur, which are regarded as the cause of the intense blue color (ultramarine) of the mineral.
Various reasons have been suggested for the origin of the color of sodalite: suggestions include the formation of colloidal sodium in the cages and the presence of radical anions such as SO3–, Cl2–, or O–. That the color is due to a metastable state, seems obvious, as the color disappears on heating.

Sodalite often occurs in igneous rocks with rather low SiO2 content, but also in metasomatized calcareous rocks, e.g., in marble. Worldwide, more than three hundred natural sources of sodalite are known, it is usually found as granular to massive aggregates of more than one meter and rarely as well-formed crystals.

Sodalite is used as a gemstone or for the manufacture of ornamental objects. In places, such as in Bahia, Brazil, where sodalite is more abundant, tiles and claddings are also made from it.

The mineral on the picture was found in Bahia, Brazil.
Picture © Ekkehard Diemann, University of Bielefeld, Germany

The lucky winners of Guess the Mineral (5) are I. Abramova, USA, and C. Weinberger, Germany.
The winner of the iPad is S. Vranckx, Belgium.

This was the last Guess the Mineral quiz. You can find more on the International Year of Crystallography (IYCr2015) at www.chemistryviews.org/iycr2014