The 5th EuCheMS Chemistry Congress (ECC) was held in Istanbul from 31 August – 4 September. Approximately 1200 attendees from nearly 70 countries discussed the latest research in chemistry and its applications.

“Thanks to the excellent work of the Turkish Chemical Society, the local organizer, and the scientific committee (chaired by Professor Helena Grennberg) we experienced a great event of European chemistry. With participants from nearly all European countries, this was another “family gathering” of European chemists, with guests from all other continents.” summarized Professor Ulrich Schubert, President of EuCheMS and Vienna University of Technology, Austria.

Lively discussions during the coffee breaks.

To ensure greater collaboration between researchers in Europe and Asia, the executive committees of the Federation of Asian Chemical Societies (FACS) and the European Association for Chemical and Molecular Sciences (EuCheMS) met during the conference.
“EuCheMS was a real chance to bring together the East and the West as FACS was also invited to observe and join the meeting.” Professor Mustafa Sözbilir, member of the local organizing committee and Atatürk University, Erzurum, Turkey, is “pleased to see that Turkey serves as a bridge between east and west once again on this occasion.”

Nine plenary lectures and about ten parallel sessions focused on the latest progress in all areas of chemistry including topics such as resources and environment, chemistry and society, materials, synthesis and catalysis, chemistry in and for life sciences, and advances in analytical chemistry.
“The scientific program, featuring a cross-section of topics, was thematically well balanced and on a very high level.” said EuCheMS President Professor Ulrich Schubert.

Dr. Thomas Geelhaar, President of the GDCh and Merck KG, Darmstadt, Germany, said that in the program, “not only the classical synthesis and modern bio- and nanotechnology topics were covered; also less- or non-funded topics like chemistry in the cultural context and the environment and resources were highlights.
For me one highlight was the plenary talk on ribosomes from Nobel laureate Sir Venki Ramakrishnan.”

Professor Venki Ramakrishnan, MRC Laboratory of Molecular Biology, Cambridge, UK, spoke about the elongation cycle of translation. His work focuses on the structures and function of ribosomes, the large protein-RNA complexes that synthesize proteins. Of particular interest is the elongation cycle, during which amino acids are added by the ribosome in a complicated multistep process to a growing polypeptide chain as directed by the code on the mRNA.

Professor Alexander J. B. Zehnder (left) during the coffee break and Professor Javier García-Martínez, University of Alicante, Spain, and Rive Technology, USA, during his talk.

Under the title “Water-Food-Energy Nexus”, Professor Alexander J. B. Zehnder, Alberta Innovates – Energy and Environment Solutions, Alberta, Canada, Nanyang Technological University, Singapore, and TripleZ Ltd., Switzerland, discussed the need for innovation in water management. The focus should be on pollution prevention as well as on multiple uses of the same water through recycling and complex chemical treatments.
Each person needs annually about 1,500 m³ of water for a decent life, roughly 2 m³ of highest quality for drinking, 20 m³ for hygiene and cooking, and 250 m³ for services and industrial needs. The rest is for growing food. A shortage of water is compensated for by food import.

The European Young Chemists’ Network (EYCN) unites the divisions of the young members of 25 chemical societies in Europe.
Under the title “Creating a Successful Career”, the EYCN hosted a three day program which was well received not only by the young chemists.

Dr. Vera Koester, Wiley-VCH, Weinheim, Germany, gave tips on how to get from a lab book full of exciting results to a successful scientific article. This included, for example, tips on how to compose a good title and how to write a
concise abstract. Marie Chapman, Royal Society of Chemistry (RSC), Cambridge, UK, talked on how to write an eye-catching CV and job application, and suggested ‘do’s and don’ts’ for interviews. During a CV Clinic Lunch participants could discuss their CVs with experts.

A three hour leadership in science workshop was led by Professor Alexander Schiller, Friedrich Schiller University Jena, and Schiller & Mertens, Germany. Interactive group activities and joint review sessions focused around topics such as how to communica

te effectively, how to listen, and how to generate win-win situations in collaborations. Participants learned, e.g., that the most difficult person to lead is oneself, that a leader has to be easy to follow, and that the first follower is of immense importance.

A highlight was the talk of Professor Luisa DeCola (right), University of Strasbourg, ISIS, France, on the secrets and science of chocolate. She looked at the history of chocolate from its early discovery to its introduction in Europe, at the processing of the cocoa beans and the production of chocolate including the physical properties related to its crystallization. She discussed possible health effects of chocolate, and introduced some of the more than 300 known compounds found in chocolate such as caffeine and theobromine.

De Cola concluded that we should eat more chocolate, especially dark chocolate from Belgium, Italy, and Switzerland. The presentation was followed by a degustation of chocolates from all over Europe.

M. Chapman explains how to write a successful CV and job application and the right picture shows a group experience during A. Schiller’s leadership workshop.

“The program of the EYCN session was well received by all participants regardless the age. This showed us that we chose a good direction and gives us the energy to plan ahead for [the next EuCheMS in] Seville, trying to create again a remarkable event.” said Dr. Cristina Todasca, Adviser of EYCN and University Politehnica Bucharest, Romania. 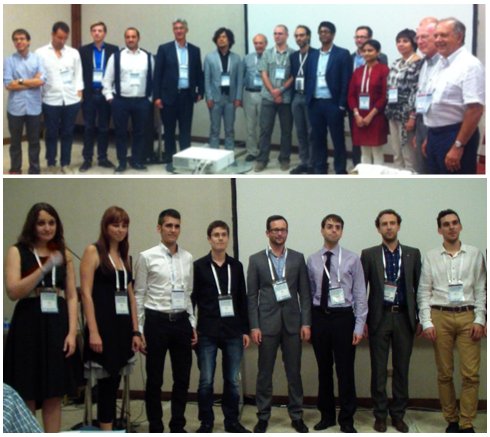 The EYCN also hosted a competition for young chemists presenting their work at the conference. Of the approximately 50 applicants, 19 finalists were chosen to present their work in a special session judged by Professors Luisa De Cola, Barry Trost, and Maurizio Prato. Gold medals were given to Frederik Wurm, Max Planck Institute for Polymer Chemistry, Mainz, Germany (under 35 level), and Zoel Codolà, Universitat de Girona, Spain (PhD level), and silver medals were given to Gonçalo Bernardes, University of Cambridge, UK (under 35 level), Tom Hasell, University of Liverpool, UK (under 35 level), Jonathan O. Bauer, TU Dortmund, Germany (PhD level), and Anna Rydzik, University of Oxford, UK (PhD level), for their impressive work.
Finalists from previous years’ competitions were also invited to contribute articles to a special issue in Chemistry – A European Journal that was produced for this year’s conference.

Awards
In addition to the Young European Chemist Awards, other awards presented during the congress included the European Sustainable Chemistry Award 2014 for Professor Walter Leitner and Professor Jürgen Klankermayer, and the EuCheMS Award for Service. It honored Professor Luis Oro for initiating the idea of creating a European identity among chemical societies during his positions as President Elect, President, and Past President of EuCheMS.

Professor Christina Moberg, Royal Institute of Stockholm, Sweden, and Professor Gérard Férey, University of Versailles, France, were the winners of the EuCheMS Lecture Award 2014. They will talk in their award lectures in 2015 about recycling in asymmetric catalysis and the multiple richness of the hybrid porous materials. This annual award promotes excellence in research and scientific cooperation among European chemists. Professor Maurizio Prato received the award in 2013 and gave his award lecture in Istanbul (see above).
Professor Barry M. Trost, Stanford University, USA, received the August Wilhelm von Hofmann Medal 2014 of the German Chemical Society (GDCh).

Atmosphere
“I think that overall, the Congress was young, dynamic, vivid and sometime filled with contrasts, like the perfect reflection of the city we were in: Istanbul.” concluded Dr. Cristina Todasca.