Saturated nitrogen heterocycles are frequently found in drug and biologically active molecules. The most obvious route to these types of molecules is via the reduction of the corresponding unsaturated parent heterocycles, which can be efficiently synthesized. However, this method is seldom used in medicinal chemistry, despite the fact that over 40 % of pharmaceutical compounds contain aliphatic amines. This is caused by significant difficulties in the reduction step. Heterogeneous reductions need stoichiometric amounts of metallic reductants and have limited functional-group compatibilities, while homogeneous catalysis still needs improvements in turn-over number and frequency, reduction in cost, and expansion of the reaction scope.

Jianliang Xiao and colleagues, University of Liverpool, UK, have developed a transfer hydrogenation protocol that enables the efficient reduction of a variety of N-heterocycles, including quinolines, isoquinolines, indoles, quinoxalines, and pyridinium salts. The team uses a cyclometalated iridium complex under mild conditions in an aqueous solution of HCO2H/HCO2Na without the need for any organic solvent. The catalyst shows excellent functional-group compatibility and high turn-over numbers (up to 7500), with catalyst loadings as low as 0.01 mol %. In addition, the iridicycle has been shown to be highly effective in transfer hydrogenations of various carbonyl compounds in water and in reductive amination to afford primary amines. 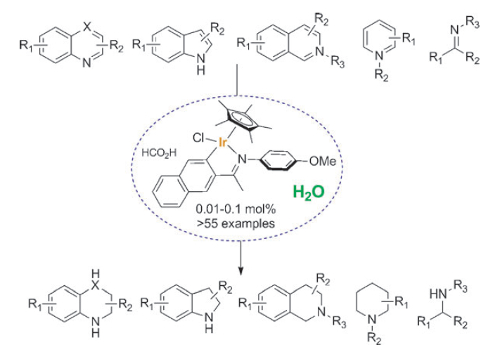 This reaction is applicable to large-scale synthesis with no need for specialized equipment. The use of environmentally benign solvent, renewable hydride donor, and the easy workup and purification provides a significant advantage for practical applications.