Bumblebee males use a pheromone to attract conspecific females for mating. The pheromone is stored and released from the head part of the labial gland and consists of a mixture of aliphatic and/or terpenic compounds.

Irena Valterova, Academy of Sciences of the Czech Republic, Prague, and colleagues tested a hypothesis that the most abundant aliphatic pheromone components are biosynthesized by transformation of not one but a variety of fatty acids (FAs) stored in the fat body. They performed experiments involving in vivo application of isotopically modified fatty acids. The resulting labelled metabolites, pheromone components, were analysed by gas chromatography and mass spectrometry. 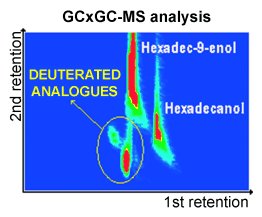 The biosynthesis of pheromones in bumblebee males appears to be very flexible, in contrast to, for example, the biosynthetic pathway providing the queen’s pheromone in honeybees. Numerous fatty acids stored in the fat body can serve as precursors of aliphatic pheromone components.

This article is part of the ChemPlusChem Cluster Issue on two-dimensional gas chromatography.