Gerhard Hilt is Professor of Organic Chemistry at the Philipps-University, Marburg, Germany. His research focuses on Cobalt(I) complexes in atom economic carbon-carbon bond formation processes. In his spare time he likes mushroom hunting and cooking. Therefore his recipe does not come as a surprise: Eichhasen Cannelloni – Stuffed noodles with Polyporus umbellatus.

What was your first experiment?

I do not remember exactly what we had to analyze in the first inorganic lab course in Bonn. But it definitely smelled unpleasant and the fun and beauty of chemistry was not involved. It is best not to remember those dark days in the first semester.

When was the last time you did an experiment in the lab – and what was it?

Some time ago I saw a paper describing the generation of an ionic liquid from urea, salt and sugar – my co-workers became a little bit scared when I re-entered the lab and prepared the mixture and heated the solids. That part of the synthesis worked fine but my idea was a complete disaster. Before cleaning the glassware I decided to let some time pass which was not of great advantage.

What is the most exciting experiment you did?

That was in Munich during my habilitation. The night before I had the idea of performing a cobalt-catalyzed Diels-Alder reaction under altered reaction condition – music and some wine were involved during the creative process. The reaction worked extremely well indicated by a very exothermic generation of heat so that the septum shot through the room. I had just performed my first hydrovinylation reaction which was later published in Angewandte Chemie. When a sober undergraduate student reproduced the reaction with the same thermodynamic phenomenon I was very excited.

What was your biggest experimental mishap?

What advice would you give up-and-coming scientists? Or what was the best advice you have ever been given?

The advice was: Once in a while in your career you should start a project in a topic where your knowledge is just rudimentary. You will learn a lot and given that your original expertise is completely different, your point of view upon the project is different so that you might be able to generate alternative approaches to solve the problem.

At the moment I am writing the first publication concerning a physical organic chemistry project which belongs to the class of projects I just described – very exciting. 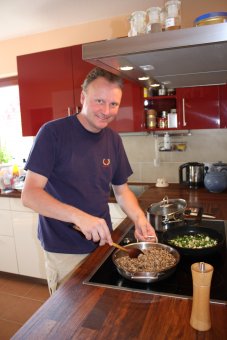 Please give some personal remarks why you chose this one.

I love mushroom hunting, although the area around Marburg where I live in is not an excellent hunting ground. The Eichhase is one of the first mushrooms which can be found in the year around Marburg and the enthusiasm to find mushrooms again is great after a long and cold winter. The smell and taste of the mushroom is quite intense and you do not get this type of mushroom in a regular restaurant (at least not in restaurants that I can afford). The season for finding the mushroom is very short (early July) and it is a once-in-a-year happening.

If you were having a dinner party and could invite somebody, past or present, who would that be – and why?

I would invite my Ph.D. advisor Prof. Eberhard Steckhan. Unfortunately, he passed away just a few weeks before I made this extremely important experiment of my career (see question 3 above) and I missed him very much at that time and I would love to hear his opinion about the chemistry I am doing right now. Also on the list of participants would be Prof. Rolf Huisgen, Prof. Wolfgang Steglich as well as Prof. Reinhard Hoffmann. These people made a great impression on me during my career and I am very happy to know these extraordinary chemists personally.

Would you like to give some advice on cooking?

If you start experimenting with herbs and spices and so on in the kitchen – be careful with the amount added and take notes! My wife is sometimes not that amused about some experiments I carry out. Sooner or later you should reach the point where it is safe to ignore such mishaps and continue experimenting no matter what the wife tells you.

First, find the mushroom in the forest and prepare the meal within 24 h. The mushroom is very often a home to various

insects. Leaves and small sticks are also part of the inner life of this species. Therefore, use only the top, outer 3 – 4 cm of the mushroom and wash several times with cold water. Cut the mushroom into small pieces (remember they have to fit into the cannelloni). Then heat two spoons of concentrated butter in a pan and add the mushroom pieces. The mushroom will loose a lot of water from which you should remove ~ 200 mL and save for later.

After evaporation of the solvent under normal pressure, stir fry the mushroom for another 2 – 3 min. In a second pan stir fry the ground meat until it obtains a nice brown color. In the third and largest pan, fry the finely cut onions (0.5 – 1.0 cm) as well as the finely cut garlic and stir fry for a couple of minutes. Then you add the tomato paste and a glass of the white wine and some of the solvent obtained from the treatment of the mushroom pieces with heat beforehand. Add the second glass of white wine slowly into the cook over a period of the next 10 min. Remember the stuffing of the cannelloni takes quite some time, therefore, save the rest of the wine for that part of the procedure.

In the unfortunate event that your wife should approach the pans and identify small (unwanted) pieces of forest ingredients in the first mushroom pan, look as stern as possible and declare them to be a special brand of oregano indispensable for the special taste of the dish. Remove the stuff as soon as you are unobserved again.

Now add the mushrooms into the pan with the onions and as soon as the meat is ready also add this component to the reaction mixture. Add the rest of the mushroom water and heat to reflux for a couple of minutes before adding NaCl and a small amount of pepper. For convenience I use a sauce binder such as starch or something similar and some of the cheese at this stage to bind the liquids until creamy and let the mixture cool off.

Now you heat a diluted aqueous solution of NaCl to reflux and add some oil. Then add 5 – 6 of the commercially available cannelloni and heat for 5.0 min. to reflux. Remove the cannelloni from the water and let them cool down. Now, fill the mushroom reaction mixture into the cannelloni and put them into a greased casserole. Repeat this procedure until all of the starting materials are consumed. Then you mix the bouillon and the cream and pour over the cannelloni. No matter what your wife or any medical scientist says about the next step, ignore these rather irrelevant statements and cover the cannelloni with a decent amount of cheese. Finally, you preheat the oven to 180 °C, cover the dish with aluminum foil and heat for 25 – 30 min. After removal of the aluminum cover you continue the application of extensive heat until the cheese turns into an irresistible light brown mass of molten fatty acids and various protein constituents.

Later in the year another mushroom (Sparassis Crispa; German: Krause Glucke) appears which also goes well in this dish.

Gerhard Hilt was born in Andernach, Germany, in 1968. He studied Chemistry at the Rheinischen Friedrich-Wilhelms-University, Bonn, Germany, where he obtained his doctorate in 1996 on the electrochemical regeneration of cofactors in enzymatic oxidative reactions. As a postdoctoral position he joined the lab of Professor M. F. Semmelhack, Princeton University, USA. After two years he moved to the lab of Professor R. Noyori (Nobel Prize winner in 2001), Nagoya, Japan, where he focused his work on asymmetric synthesis and catalysis. In 2002 he started as a Professor for Organic Chemistry at the Philipps-University, Marburg, Germany. His research interests include organic methodology, electrochemistry, physical organic chemistry, and application of new methods to generate organic materials.