Can you say something about your research, please? I think your group is divided into two parts?

Yes, at the moment in one part we are working a lot on palladium-catalyzed oxidative carbocyclizations, reactions in which we make new C–C bonds under oxidative conditions. This has led to many new synthetic methods. We worked greatly in this field from the 1980s to early 2000 and then revisited it more or less when we got the European Research Council (ERC) Advanced Grant about five years ago.

The other field we are working in is enzymes. You can also divide this into two subgroups: One uses enzymes in combination with transition metals for dynamic kinetic resolution. In this case we try to have the enzyme doing one job while the metal does another.

The other subgroup of the enzyme work is the evolution of enzymes. For this, we try to modify existing enzymes to obtain better enzymes for catalytic reactions. Recently, as reported in Angewandte Chemie, we developed a method that gives us enzymes that are suitable for combination with metals [1].

So then you can combine both of your fields?

Yes, exactly. The enzyme fields are now shaking hands, but the palladium area stands a little bit by itself.

I should also mention that we have a third area that perhaps relates a bit to both of these areas. This is nanopalladium. We developed a hybrid catalyst that I think got a lot of attention when it was published in December 2013 in Angewandte Chemie [1]. For this, we have nanopalladium inside cavities of a mesocellular foam. We call them hybrid catalysts, as they work together with enzymes in tandem inside these cavities. This leads to a de-racemization of amines. We have also used this nanopalladium chemistry for many other synthetic transformations in the group. Actually, we published a large number of papers on this topic since 2011. 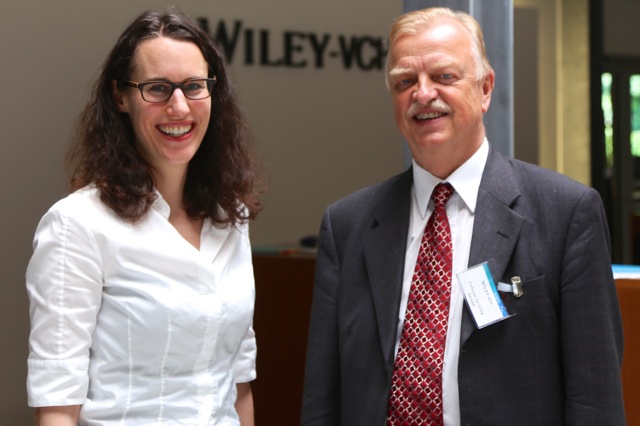 How have these topics evolved? What motivated you in the beginning?

Actually it began with the immobilization of enzymes in these mesocellular foams. I had a postdoctoral fellow from Japan who had been working with a professor on heterogeneous catalysis. The postdoc, Mozaffar Shakeri, wanted us to immobilize catalysts and suggested to look at microcellular foams. So we did that. We began by immobilizing the enzyme, but then later on we also immobilized nanopalladium by using a special technique. And we were surprised to see how efficient this was for a number of organic transformations. So we started to use this for oxidations, lactonizations, and several different types of organic transformations.

Now we use this principle in cavities. The nanopalladium and enzymes are positioned next to each other. The metal is equilibrating the left- and right-hand molecules, and the enzyme is selecting one enantiomer. So in the cavity we get 100 % yield from the racemate of only one left-hand enantiomer of a molecule [2].

Yes, definitely. If you would have asked me 15 years ago, I couldn’t have even dreamed of me becoming so interdisciplinary and doing molecular biology, materials sciences, organic synthesis, and catalysis all at the same time. But it has become this way. So this is an interesting development.

Changing my mind and seeing organic chemistry and chemistry as a whole probably came in 2003/2004 when the Swedish Foundation for Strategic Research announced the Strategic Innovation Area (SIA) program. The idea was to motivate people to start a completely new field. They funded this for four years. In the first year you had to go outside your lab and work together with another lab to learn a new technique that you had never done before. If that was successful, you had the possibility to compete for the subsequent three-year grant. Twelve out of 20 – and I was lucky to be one of these – got the SIA  aubsequent therr-year grant.

Since I had heard Manfred Reetz talk about his evolution of enzymes, I was quite excited about this. So I decided to go to Reetz to learn about the directed evolution of enzymes. The principle here is that you modify enzymes, then you get a library of maybe thousands of different variants, and then you screen them for particular enantioselective reactions. I might not have started with this had the people at this Swiss Foundation not have found this very interesting and decided to fund it.

What motivated you to study chemistry?

My teachers were very important for me in choosing chemistry. I found it easy to learn. I never had a problem with mathematics or natural sciences. Other areas such as languages were tougher.

But in Sweden everybody speaks many languages?

Yes, that is right. From that point of view I don’t have a problem. But in terms of the efficiency of learning, I was probably not so good in this area as I was in the natural sciences and mathematics. So I chose the things I was good at.

What are your future plans for your research?

I will probably narrow my focus a little bit, because we are involved in so many projects. I have not decided yet which types of projects I would like to do. I have to do this in the coming two years. But I think the enzymes will still be on my list. I don’t know how much more we will continue in my personal research with nanoparticles. But at least some of my previous co-workers might continue with this field, because they played a part in developing the field. They were pioneers together with me.

So perhaps nanoparticle chemistry will fall to them, whereas for the enzymes there is no clear person who would continue that. I think also the palladium research will probably continue for another few years.

When you look at organic chemistry as a whole, where would you say that the field is going? Is it becoming more bio-related?

One part is definitely more bio-related; however, traditional catalysis has also had a kind of rebirth in the last five to seven or so years. You can see that catalysis has come back very strongly with journals like ACS Catalysis and ChemCatChem, which have been very successful. I think this has to do with the fact that you can characterize many heterogeneous catalysts today that you could not before. In the past, catalysis was perhaps not considered as a strongly scientific field. In the ’70s and ’80s heterogeneous catalysis was diagrams and physical chemistry. You did not see anything. Now you see atoms. So I think this is a big change for catalysis and the field will become even stronger.

Within this area you have many hot topics like C–H activation, of course. I think method development will always be a topic in organic chemistry.

And what do you do when you are not in the lab?

In the summer I do a lot of fishing. I like to spend time on our island where we have two boats. We like to go out there and catch herring together with our grandchildren, for example. They are always very excited about this. I also like to play squash.

Thank you very much for the interview, Professor Bäckvall.

Bäckvall is chairman of the Editorial Board of Chemistry – A European Journal and a member of editorial advisory boards such as the Journal of the American Chemical Society and ChemCatChem.