An estimated 10–15 TW of additional power will be needed by 2050. Efficient conversion from solar power is one way of achieving this. Michael Grätzel and colleagues, Ecole Polytechnique Federale de Lausanne, Switzerland, have developed dye sensitized solar cells (DSCs) which have conversion efficiencies of over 12 % for single cells and 16 % for tandem cells.

The Ru-based dye used in the cell is supported by TiO2 nanoparticles. This allows the longer wavelength emissions to be captured with greater efficiency than a dye monolayer.

The DSCs, now in commercial production, are transparent which allows light to be collected from all directions generating current even in ambient light conditions. The cells also display long lifetimes and by substituting ligands on the Ru complex, the wavelength at which the cell works, and hence the color, may be altered. 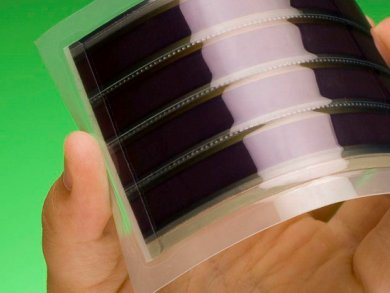