Our modern society requires ever increasing amounts of energy. This trend is not sustainable on account of both the availability of energy resources and their impact on the environment. It is therefore essential to find ways to decrease our energy consumption. The use of solar control coatings (SCCs) on the glass windows of buildings is an effective way to achieve this by changing the optical properties of the glass and controlling the amount and type of light allowed in or out. This essay will look at existing commercial SCCs along with exciting new work on smart SCCs for various climates.

SCCs are thin deposits of appropriate materials that interact with electromagnetic radiation, by either absorbing or reflecting part of it. The interaction with infrared light, which accounts for more than half of the energy from sunlight, is particularly important. If SCCs are applied to a window they can control the amount of energy passing through it. In other words, they control the radiation from the sun that enters the building and/or the energy from heat escaping the building.

To have a practical use, SCCs must have high transmittance in the visible region so as to let light pass through the window. The optical properties in the infrared region, however, might be different, depending on the application – such as in what kind of climate the coatings will be used.

For cold climates, the ideal SCC should maximize the solar radiation entering the building while minimizing the heat escaping from it. This is achieved by using so-called low-E glasses. These glasses have coatings that are transparent to short-wave infrared radiation, allowing most energy from the sun to pass through. They will, however, reflect long-wave infrared radiation, meaning that most of the energy that comes from heating the building, which has a longer wavelength, will not pass through the window and escape.

For warm climates, by contrast, SCCs should minimize solar radiation entering a building; to do this, the materials should be highly reflective in the infrared region. These kinds of coatings are normally referred to as heat mirrors.

Both low-E glasses and heat mirrors already exist as commercial products; indeed major glass companies such as Pilkington-NSG and Saint Gobain make windows with these coatings, which has already led to substantial energy savings.

Low-E glasses are usually based on transparent conducting oxide materials such as tin dioxide, whereas heat mirrors are based on thin layers of metals or alloys, that is, a 3–5 nm-thick layer of silver.

As stated above, glasses with these optical properties already exist. However, there is still room for improvement, to develop more efficient materials with enhanced behavior, thereby leading to greater reductions in energy consumption.

The main limit of the SCCs described above is that they can be used only for one type of climate, that is, either in very cold or very hot weather conditions. Many areas such as central European countries and many US states, however, have very cold winters and very hot summers. In these cases, an SCC that could be effective in both seasons would be ideal.

A material that potentially has the characteristics of an all-year-round solar coating is vanadium(IV) oxide (VO2). VO2 is a thermochromic material, which means that it changes its optical properties with temperature. This change is due to a phase transition, more specifically, a metal-to-semiconductor transition (MST). At room temperature, VO2 exists in the monoclinic phase (M), which behaves as a semiconductor. At higher temperatures, on the other hand, VO2 is stable in the rutile (R) phase, which has the properties of a semimetal. The transition temperature (Tc) is 68 °C, and the transition is completely reversible [1].

Such an MST causes a significant change in the electric properties, with the R phase being much more conductive than the M one. At the same time, however, the optical properties are also heavily affected. VO2 (M) shows a very low infrared reflectance (high transmittance), whereas VO2 (R) has a much higher infrared reflectance (lower transmittance). In addition, the visible optical properties remain virtually unchanged.

Owing to its thermochromic behavior, VO2 has the potential to be an SCC. If applied to a glass window, at low temperature – a cold winter day – most of the infrared light/energy from the sun will go through, as the material is in the M phase. At higher temperatures, on the other hand – a hot summer day – VO2 will be in the R phase, which will reflect a significant proportion of the sun’s infrared energy. In this way, the energy gain from sunlight will be maximized in winter and minimized in summer, which leads to reduced costs and energy consumption for winter heating and summer air conditioning. 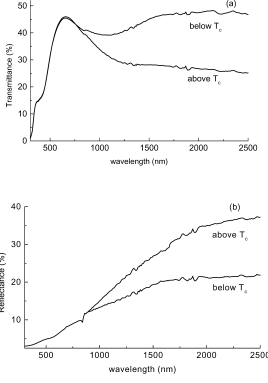 The graphs show the changes in the transmittance (a) and reflectance (b) for vanadium dioxide below and above the Tc value [2].

Despite the potential, however, there are still some issues that prevent VO2 from being used in SCCs. Specifically:

Many studies have been performed to address these issues and make VO2 suitable for SCC use.

Several studies have shown that Tc can be changed with the introduction of appropriate dopants into the VO2 structure. The use of tungsten, in particular, proved to be very effective in decreasing the temperature. Tc values as low as 5 °C were observed [3]. Other effective dopants were niobium and fluorine [4, 5].

Other studies also showed that the morphology of the coatings could affect the value of Tc. For instance, in thin films prepared by chemical vapor deposition (CVD) it was observed that the use of surfactants during the deposition had an effect on the surface morphology, and this led to a decrease in Tc. In fact, a Tc value of about 30 °C was seen without the use of any dopants [6].

The brownish color of VO2 is not suitable for use as a window coating; attempts have been made to change it to a more acceptable hue. Interesting results were obtained by incorporating gold nanoparticles (AuNPs) into the VO2 structure [7].

One of the features of AuNPs is surface plasmon resonance (SPR) due to the interaction of free electrons with light; such interaction gives the NPs a color that depends on their size and shape. In the case of AuNP coatings, the color may also depend on the host matrix. When Au NPs were included in a VO2 matrix using a CVD process, the color of the coatings changed from brown-yellow to a more acceptable blue; the hue and intensity of the color depended on both the concentration and dimension/shape on the NPs. Moreover, a Tc value of 52 °C was observed.

Higher Transmittance in the Visible Region

An effective way to improve transmittance in the visible region is with the use of multilayer systems; for instance, a multilayer stack made of TiO2/VO2/TiO2 coatings has a visible transmittance about 30 % higher than the simple VO2 coating [8]. This behavior is due to the complex interference mechanisms taking place between the different coatings owing to their different optical properties.

The development of solar control coatings has already proven to be an effective way to reduce energy consumption; the existence of commercial products confirms this. Further improvements can be achieved with the development of more advanced materials, with VO2 being an example. To achieve this more research has to be carried out to optimize the behavior of the coatings, creating smart optical SCC materials, thereby leading to higher energy savings. This shows how the study of the interactions between light and matter is an essential part of our progress towards a more sustainable future.

Author
Clara Piccirillo, CBQF-ESB, Universidade Católica Portuguesa, Porto, Portugal (orcid.org/0000-0002-6339-716X)
She has won with this essay the 2nd prize in the Essay Competition Chemistry and Light.