How many times have the Nobel Prizes been awarded?*

Since 1901, 496 Prizes have been awarded in the traditional fields of Literature, Peace, Medicine, Physics and Chemistry. In 1968, Sveriges Riksbank established the prize for Economic Science, which has since been awarded 41 times.

In total, the prize has been awarded 537 times, to 829 Nobel Laureates, 23 of which were institutions, the rest were presented to individuals.

Who received the first Nobel Prize in Chemistry? 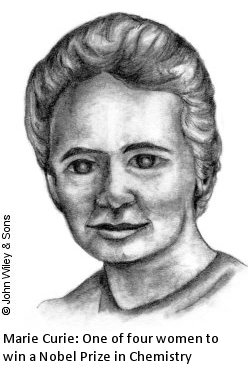 What is notable about the medals of Max von Laue and James Franck?

They were dissolved in aqua regia to hide them during the Nazi occupation of Denmark.

The German physicists Laue and Franck had left them with Niels Bohr to prevent them from being confiscated by the German authorities on their return home. According to Bohr’s colleague, George de Hevesy, the medals were Bohr’s first concern when Denmark was occupied. As Hevesy writes in Adventures in Radioisotope Research, Vol. 1, (p. 27, Pergamon, New York, 1962): ” While the invading forces marched in the streets of Copenhagen, I was busy dissolving Laue’s and also James Franck’s medals. After the war, the gold was recovered and the Nobel Foundation generously presented Laue and Frank with new Nobel medals.”

How many women have been awarded the Chemistry Prize?*

How many people have won a Nobel Prize in more than one subject?*

2 – The first was Marie Curie who was awarded the Physics Prize for her work on radiation phenomena in 1903 and the Prize for Chemistry in 1911 for the discovery of the elements radium and polonium.

Linus Pauling was the second person to receive prizes in different fields and the only person to have two unshared prizes. His first prize, for Chemistry in 1954, was for his research into the nature of the chemical bond and its application to the elucidation of the structure of complex substances. In 1962, he was also awarded the Peace Prize in recognition for “[campaigning] ceaselessly, not only against nuclear weapons tests, not only against the spread of these armaments, not only against their very use, but against all warfare as a means of solving international conflicts.”

John Bardeen and Frederick Sanger are the only other people to win the award twice, for Physics and Chemistry, respectively. The Peace Prize is the only one to have been awarded three times to the same recipient – The International Committee of the Red Cross. In addition, the ICRC’s founder, Henry Dunant, was awarded the first Nobel Peace Prize in 1901.

Which country has produced the most Chemistry Nobel Prize winners?*

How many years has the Chemistry Nobel Prize been shared?*

How many Nobel Laureates spoke at the Frontiers of Chemistry event in Paris this year?

It’s not too late – You can still watch the presentations from the event.