A new lab-on-a-chip sensor array that is little bigger than a business card can detect toxic industrial chemicals at low cost and at low concentrations.

Ken Suslick and colleagues at the University of Illinois at Urbana-Champaign have spent the last decade developing colorimetric devices for detecting a wide range of chemicals. Last year the created such a device that can detect sweet substances and will be a boon for the food and drinks industry. Now, they have turned their attention to the pressing matter of hazardous chemicals that are potentially harmful to human health and can cause ecological damage.

Toxic industrial chemicals are intrinsically reactive; their toxicity usually arises because they react with critical metabolic enzymes and receptors. For instance, hydrogen cyanide, blocks the enzyme cytochrome c oxidase while phosgene inhibits pulmonary function. Other compounds simply burst cells, hydrogen chloride and hydrogen fluoride, for example, cause lung cells to lyse, while yet others are potent oxidants or reductants that destroy biological molecules. Detectors for various industrial chemicals are expensive, unwieldy and, in general, are non-specific.

Suslick and colleagues explain that their device consists of a 6×6 array of nanoporous pigments immobilized on ormosils, an organically modifies siloxane. Each pigment spot responds to a different characteristic associated with a chemical being samples and changes color if that characteristic is present. By using four classes of chemically responsive dyes the team can then identify a given compound by the pattern of color-changed spots that emerges on exposure to a given compound. The first contains metal ions (e.g. metalloporphyrins) that respond to a chemical’s Lewis basicity. The second are pH indicators that respond to Brønsted acidity/basicity. The third class of dyes have large permanent dipoles (e.g. vapochromic or solvatochromic dyes) that respond to the local polarity in the compound being sampled. Finally, metal salts that participate in redox reactions represent the final class and respond to that characteristic in the toxic compound. 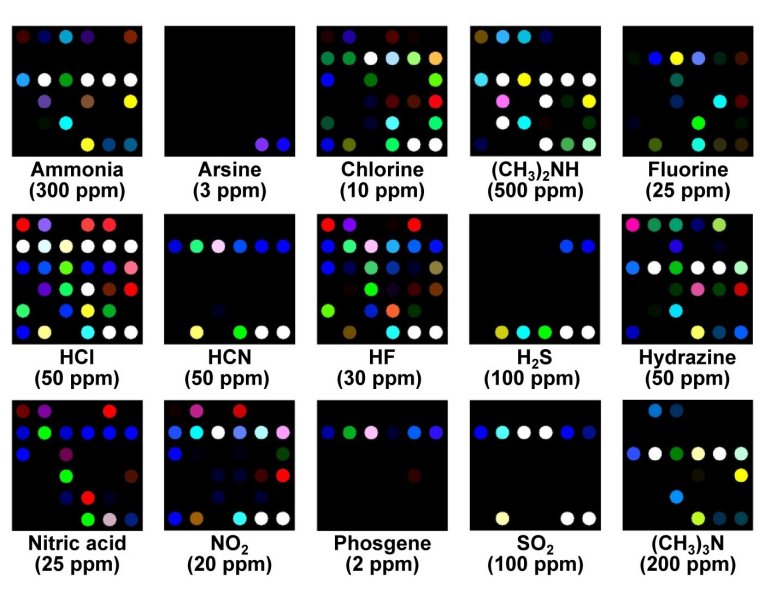 The pattern of spot colors depends entirely on the combination of characteristics associated with each of these four types of reactivity and so each chemical produces a distinct pattern that is easily identifiable. The team has demonstrated that they can differentiate between 20 toxic compounds, including ammonia, hydrogen cyanide, phosgene and sulfur dioxide, that are immediately dangerous to human life or health at very low concentrations and within two minutes of exposure. It takes an exposure of a mere 5 minutes to demonstrate conclusively without error the identity of the analyte at just 5 % of permissible exposure levels. The array design also means it is insensitive to changes in humidity.

“The design of our disposable colorimetric sensor array is based on dye-analyte interactions that are stronger than those that cause simple physical adsorption,” explains Suslick. The system is not only inexpensive and disposable but broadly applicable and highly specific.
Visual detection is sufficient, but hooked up to a computer via a digital video input device, the sensor could be used as an alert system for leaks or a control for monitoring industrial processes.

The team adds that the colorimetric sensing arrays were “fully successful at detecting and identifying toxic industrial chemical at their IDLH concentrations as demonstrated by the difference maps,” they say. “Even by eye, without statistical analysis, the array response to each compound is represented by a unique pattern and excellent discrimination among a very wide range of analytes was possible.”

“The kind of technology Suslick is developing is extremely promising,” enthuses Nathaniel Finney of the University of Zurich. “It represents a significant departure from the traditional approach to molecular recognition, in which chemists try to design a single molecule that will interact with a single analyte of interest with appropriate affinity and high selectivity.” He points out that it is comparatively easy to identify complex patterns using computer algorithms, “Chemists can relax the performance criteria for individual molecules,” he adds Finney, “it is not as important whether one molecule provides a perfectly selective/sensitive response as long as the collection of molecules provides a unique fingerprint.”