Equipment built by German scientists can be used to study processes at interfaces with great accuracy. Hans Joachim Freund and co-workers of the Fritz-Haber-Institut in Berlin describe the advancement of four experimental techniques developed in their lab to investigate nanoscopic systems. By combining photon scanning tunneling microscopy, aberration-corrected low-energy electron microscopy coupled to photoelectron emission microscopy, microcalorimetry, and electron-spin resonance spectroscopy, unique information on the relationship between geometric structure and properties is obtained. The methods can be applied to solve fundamental problems in surface science and to study interesting systems —particularly in the field of catalysis— which would otherwise be difficult (or impossible) to address.

“Catalysis happens at interfaces and experimental techniques are desperately needed to provide information on those systems,” says Freund, who is interested in understanding disperse metal and oxide catalysts at the atomic scale. According to Freund, appropriate samples in this field are very complex so that a combination of techniques is generally required to achieve a complete picture and avoid overestimating individual results. This led him and his colleagues to design new instruments to characterize their systems.

The first method developed by the German team could overcome one of the main disadvantages of scanning probe techniques, namely, their inherent chemical insensitivity, by detecting the fluorescence signal generated by locally exciting the surface with electrons from the tip. The new technique is called photon scanning tunneling microscopy (PSTM) and has been used to study the optical characteristics of metal particles and investigate defect structures in oxide surfaces. Additionally, the researchers are working on a new aberration-corrected instrument for low-energy electron microscopy (LEEM) and photoelectron emission microscopy (PEEM), which will hopefully allow them to investigate single supported nanocatalysts. Freund and co-workers have also built a highly sensitive microcalorimeter that can be used to measure temperature-dependent heats of adsorption on nanoparticle ensembles with aggregate sizes of about a hundred atoms. The fourth technique, called electron-spin resonance (ESR) spectroscopy, can be applied to study particle ensembles and may provide interesting information that is out of reach for other methods, the authors say. 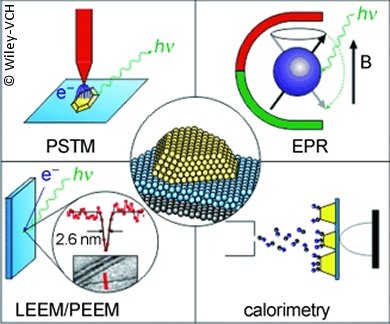