In the Chinese calendar, the year of the Dog begins today. The traditional celebrations, also known as the Spring Festival, start on the evening before today’s Lunar New Year, last 15 days, and end with the Lantern Festival. After the Lantern Festival, all New Year decorations are taken down.

During the Lantern Festival, lanterns of various shapes and sizes can be seen everywhere. Customs and activities of the festival are different in different regions of Asia and include floating, fixed, held, and flying lanterns, fireworks, riddles written on lanterns, dragon dances, and walking on stilts. The main color seen during the festival is red, which symbolizes good fortune, joy, and prosperity in Chinese culture. 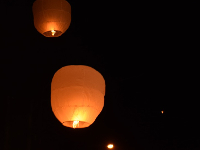 The flying lanterns, also known as sky lanterns (pictured right), have a long tradition in Asia and have become popular around the world in recent years. They are composed of a thin paper shell on a bamboo or wire frame and a flame source, such as a small candle, below.

The lanterns can fly due to buoyancy, the same physical phenomenon that is responsible for boats floating on water. The hot air created by the flame and trapped in the lantern has a lower density than the colder surrounding air—the same principle as in large hot air balloons.

In order to float or fly, the combined weight of the lantern and the hot air inside it has to be equal to or smaller than the weight of the cold air it displaces. The upward force of the surrounding air can then counterbalance the downward force exerted by gravity. Once the flame source’s fuel is exhausted, the air in the lantern cools down again, and the lantern sinks to the ground.

While sky lanterns are pretty, they can also be a fire hazard when they land. They should be used with caution, for example, around buildings with flammable roofs.