The controlled transport of materials through fluids has the potential for applications in diagnostics, the transport of “chemical cargo”, and drug delivery. One approach towards this transport involves the use of active liquid droplets. These can move either autonomously or upon an external stimulus, which may be chemical, thermal, electrical, or optical, for example.

David L. Officer, University of Wollongong, North Wollongong, Australia, and colleagues have developed a type of movable droplet that can move in any direction in three dimensions in water with speeds as high as 10.4 mm/s, with the movement induced by ultraviolet (UV) or visible light. The team introduced a photoisomerizable spiropyran (SP, pictured below) and dodecylbenzenesulfonic acid (DBSA) into droplets of different organic solvents.

Upon irradiation with ultraviolet light, the colorless SP photoisomerizes to its red merocyanine form (MCH+) which lowers the interfacial tension (IFT) at the water/organic solvent interface. The gradient in IFT induces a mass transfer along the interface, a phenomenon called Marangoni flow, which causes the droplet to move away from the light source. When irradiated with visible light, MCH+ isomerizes back to SP, creating a lower IFT away from the light and the droplet moves toward the light source. 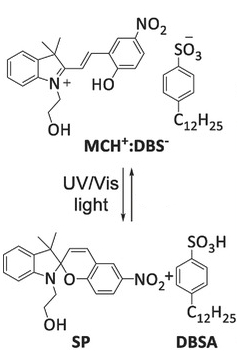 The researchers further demonstrated the potential to conduct material transport and chemical reactions with the 3D motile droplet. When merging a photoactive droplet with a droplet carrying a chemical cargo, the resulting droplet can be moved and transferred to a third (“reactor”) droplet where the cargo undergoes a chemical reaction.