Sulfonamides and other sulfur-containing functional groups are important, e.g., in pharmaceutical chemistry. A method for introducing different sulfur-containing groups under mild conditions could be useful for the late-stage functionalization of drug candidates.

Patrick S. Fier and Kevin M. Maloney, Merck & Co., Inc., Rahway, NJ, USA, have developed a protocol for a conversion of primary sulfonamides to several other functional groups under mild conditions (examples pictured below). The team first reacted the primary sulfonamides with aldehydes in the presence of a base to obtain N-sulfonylimines as condensation products. These intermediates then eliminate a sulfinate salt in the presence of a triazole-based N-heterocyclic carbene (NHC) catalyst.

The resulting sulfinate groups can easily and reliably be converted to other functional groups under mild conditions, using reactions with different electrophiles or via a loss of SO2. The method tolerates a wide variety of common functional groups. The team was able to use the protocol for the late-stage functionalization of several complex drug molecules. 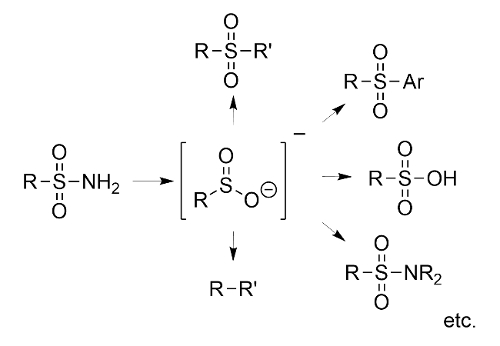