In their review, Subramanian Balamurugan and David A. Spivak, Louisiana State University, Baton Rouge, LA, USA, focus on molecular imprinting in monolayers, where a template is employed to specifically order single molecules or macromolecules on a surface. Besides this there exist other important surface imprinting methods such as bulk-polymer thin film coatings on surfaces, inorganic surface imprinting, polymer grafting, and layer-by-layer polymer coatings.

Due to difficulties in imprinting large molecules and obtaining fast binding responses with traditional network polymer materials, Molecularly Imprinted Monolayers (MIMs) have been developed with the aim of enhancing mass-transfer of analytes in imprinted materials. Three approaches to MIM fabrication have been developed with respect to the formation of the pre-organized template matrix complex.
In the first approach (picture: A), the molecular binding sites are formed in a monolayer on a glass or gold surface by first adsorbing the template molecule on the substrate and the monolayer of functionalized alkane is formed around it. The second approach (B) uses a template-macromolecule complex to form binding sites in the solution phase that are immobilized onto a surface. The third approach transfers an imprinted Langmuir film onto a gold surface. Mass transfer in these MIMs in most cases is in the order of minutes, and both small and large molecules (proteins) have been imprinted. 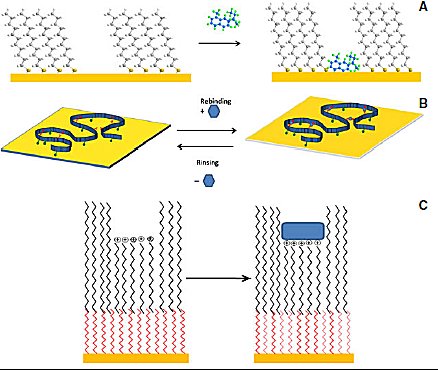 The use of MIMs is a promising approach for molecular recognition and molecular sensing with advantages over more traditional molecular imprinting techniques.