George Whitesides, Aaron Mazzeo, and co-workers, Harvard University, Massachusetts, USA, have developed paper-based touch pads that may fill the gap between touch screen displays, such as those used in mobile phones, and conventional commercial keypads.

The touch pads are made from metallized paper, which consists of layers of paper, evaporated aluminium, and a polymeric coating. To create the individual keys, a laser cutter ablates lines through the film of evaporated aluminum to pattern distinct, conductive regions. The pads are attached to an external power source and electronics. When a key is touched, the external electronics detect the change in capacitance caused by the effective capacitance of the human body and the electrical impedance across the tip of a finger. 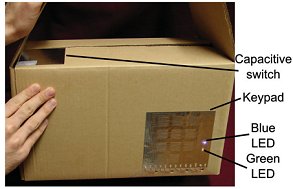 The touch pads use environmentally benign materials and are cheap and easy to make as the metallized paper is already made commerically for shiny labels on drinks and for book covers. Once the associated electronics and power source also become cheap and flexible, this will allow the touch pads to be used for single-use purposes, such as in sterile or contaminated medical environments or for disposable games. Until then, the pads could find use in “smart” packaging such as cardboard boxes that require a security code before legitimate opening (pictured), where the external electronics are contained within the box and can be removed and reused.