Last month, ChemistryViews.org featured an article in which we asked readers to vote for their favorite chemistry joke and to submit their own. As you can see below, we received many great jokes.

One joke stood out as the most liked by our readers. This was the joke: Why do chemistry professors like to teach about ammonia? Because it’s basic material.

It was submitted by Albano Galán, a Ph.D. student in the group of Professor Pablo Ballester at the Institute of Chemical Research of Catalonia in Tarragona, Spain. He will receive a copy of the book Molecules that Changed the World.

We took the opportunity to ask Albano (pictured) a few questions:

Which was your favorite joke from our article (other than your own)? 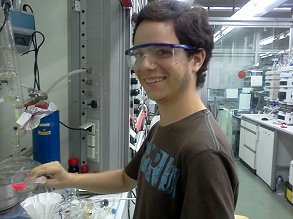 They all sucked. It was so easy to beat them … But seriously, the one about the helium not reacting was really good.

Why did you choose to study chemistry?

I decided to study chemistry because I wanted to learn how the world works at its very basis.

What do you enjoy most about chemistry?

That it is ridiculously fun. There’s not a single day that I do not enjoy working in the lab cooking up some stuff.

And what is your field of research?

Congratulations Albano, and thank you to everybody who submitted a joke or voted.