Zootoxins are widespread in the animal kingdom. They are used either actively or passively to catch prey, defend against attackers, or avoid competition. They are among the most complex chemical mixtures in the animal world. The compounds they contain are extremely diverse and represent a treasure trove for natural products research.

It is estimated that there are up to 20 million active substances in the approximately 200,000 toxic animal species. Of these substances, about 16,000 have already been studied, resulting in some medications that are already on the market. The combination of modern “omics” methods (transcriptomics, genomics, and proteomics) with novel bioinformatic tools in the new field of “animal venomics” allows for the development of venoms as a bioresource for new compounds with applications in medicine or plant protection. The focus of this search increasingly reaches beyond venomous tropical snakes, scorpions, and spiders to indigenous European animals like the wasp spider, fire salamander, and adder.

1 Toxins in the Animal Kingdom

The use of “chemical attacks” that use toxins is widespread in the animal kingdom. Although most people tend to think of famous venomous animals like snakes, spiders, or scorpions in this context, some venomous animals have evolved in all the phyla: For example, there are toxic birds like the Pitohui of New Guinea, mammals like the Australian platypus, or fish like the weever (Trachinus draco) from the waters of Germany (see Fig. 1). It is estimated that there are about 200,000 venomous animal species in total. 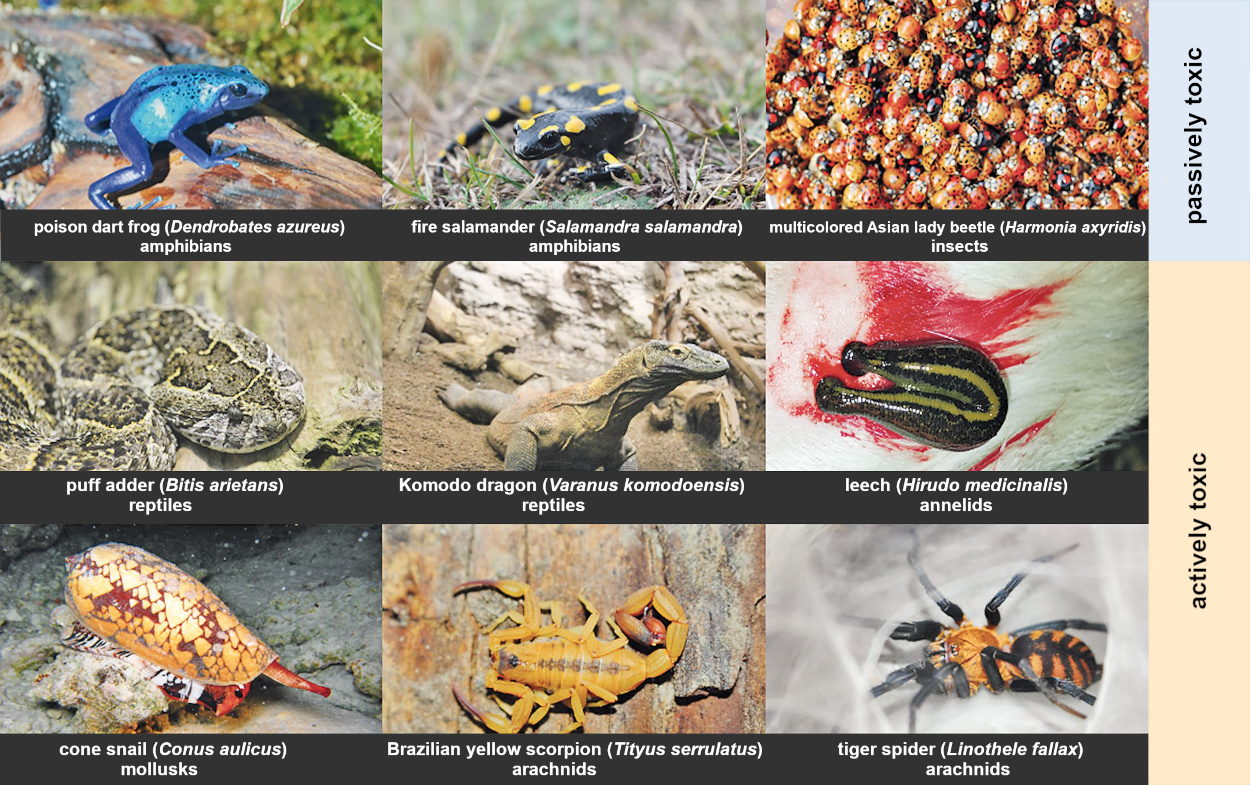 Figure 2. Diversity of venomous animals with examples of the mechanistic classes of venom transmission. (Photos: © Tim Lüddecke and Andreas Vilcinskas)

The different implementation strategies have direct consequences for the chemical composition of the venoms in question. The absorption rates of the components in passively toxic animals are highly dependent on the size of the molecule (see Tab. 1). Larger molecules have more difficulty reaching their target location. For this reason, passive venom systems are primarily made of extremely small, mostly organic compounds like alkaloids or biogenic amines.

Because actively venomous animals can inject their toxins into their prey or attacker with fangs or stingers, the size of the molecules plays a smaller role. In consequence, active venom systems consist mainly of proteins and peptides, which are many times bigger than the components in passively toxic animals.

Table 1. Examples of toxins from actively and passively venomous animals.

In Nature, animal venoms have three major functions: capturing prey, defense, and avoiding competition. They also have a few secondary functions [2]. All three of these core functions are extremely central in the fight for survival, so it is not surprising that animal venoms are evolutionarily highly optimized with regard to their function. Their bioactive components, the toxins, are among the most powerful substances found in Nature. They are also very biochemically selective and work with great precision.

2 Venoms as Weapons in the Battle Against Disease

The toxins in venoms work through biochemical interactions with molecules that have a key function in the physiology of the victim [1]. For example, neurotoxins interact with ion channels or receptors on nerve cells, inhibiting or overstimulating their activity, which leads to paralysis or cramps (see The Chemist’s Fear of the Fugu). Hemotoxins, on the other hand, interfere with blood-clotting cascades, leading to uncontrollable blood clotting or its complete inhibition. Cytotoxins lead to the death of cells or tissues.

The clinical symptoms caused by some venoms can be life-threatening. Because many of the toxins’ target molecules are also involved in human diseases, biotoxins are outstanding candidates for drug development. Their ability to biochemically steer target molecules involved in human diseases with precision and high effectiveness is a highly promising approach to treatment [3].

In addition to their biochemistry, the unique molecular diversity found in the venom of a single species makes it a true treasure trove for natural products research. Venoms are among the most complex naturally occurring chemical mixtures and can contain thousands of different classes of molecules. Frontrunners in this regard are the spiders, because their venoms contain up to three thousand components [4]. It is estimated that about ten million biomolecules could be isolated from the venoms of the barely 50,000 species of spider [5]. Given that there are probably about 200,000 venomous animal species, it becomes clear that the potential for animal toxins in the search for new drugs is enormous.

Interest in venoms, whether because of their importance in medicine or the biology of animals, was awakened early. Research into the passive venoms of the fire salamander (Salamandra salamandra) began in the late 18th century, in the very early stages of natural products chemistry [6]. It is, thus, not surprising that over time, many venoms have been investigated and some components have been “translated” into medications.

The greatest success story in this regard is clearly the drug Captopril, which was derived from a molecule in the venom of the jararaca (Bothrops jararaca) that attacks the walls of blood vessels and is used as a medication against high blood pressure and heart disease (see Fig. 3) [7].

Today, decades after its discovery, this drug is among the best-selling medications of all time and has improved the quality of life of millions of patients around the world. Its mechanism of activity stems from the inhibition of the angiotensin-converting enzyme (ACE). 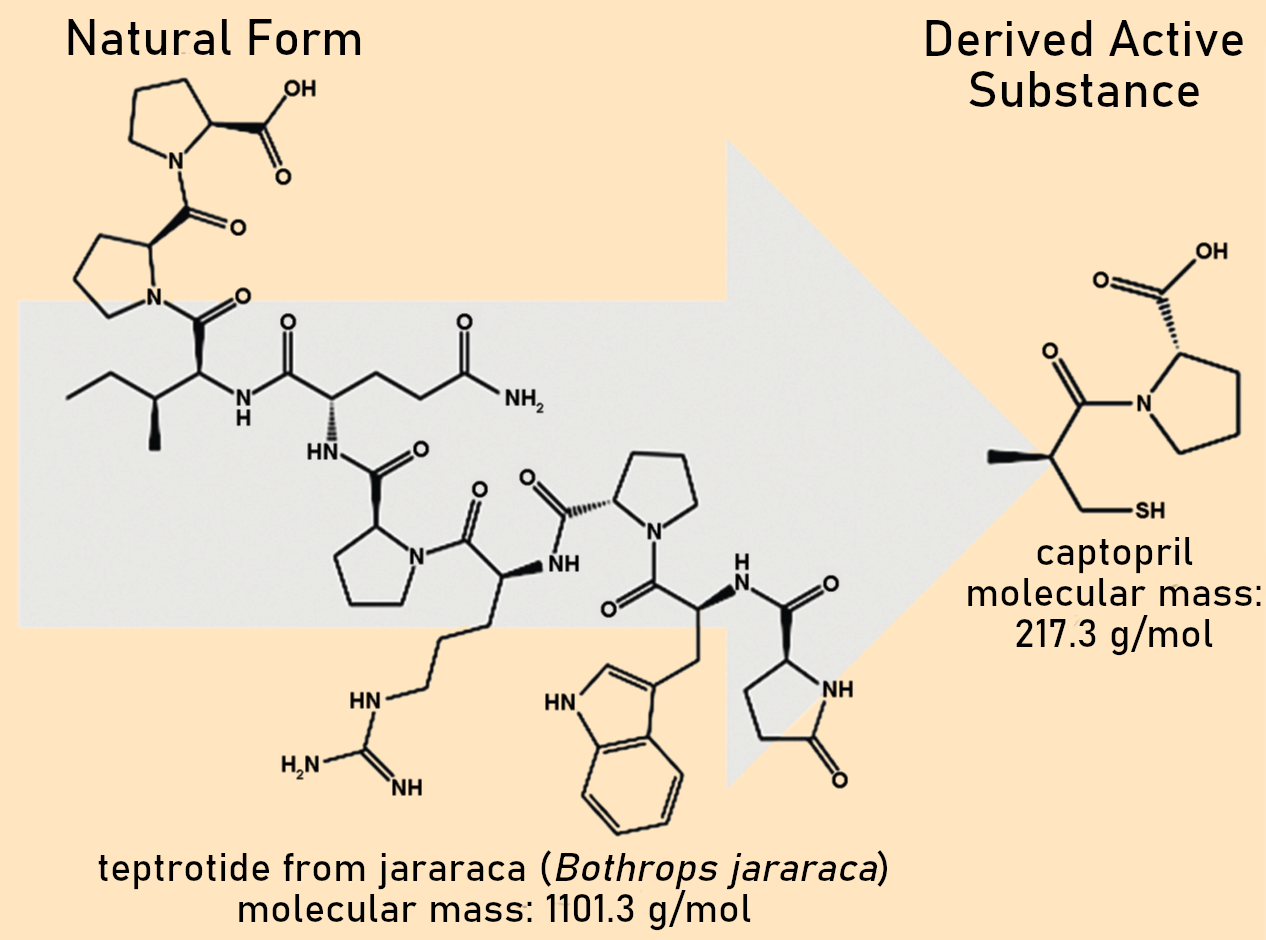 In the process of developing a drug based on the hemotoxic venom of the viper Bothrops jararaca, some of the peptides that attack vascular walls were isolated, including teprotide (see Fig. 3, left). However, the natural molecules as found in the snake venom have some characteristics that limit their use in humans. In particular, their size makes them unsuitable. Through stepwise chemical modification and size reduction, the derivative captropril was developed (see Fig. 3, right). This molecule is about 80 % smaller and has since been used successfully in the treatment of cardiovascular diseases.

There are many other applications of animal venoms. For example, the peptide drug exenatide is used for treating diabetes. It is based on exendin, a polypeptide found in Gila monster (Heloderma suspectum) venom [7]. 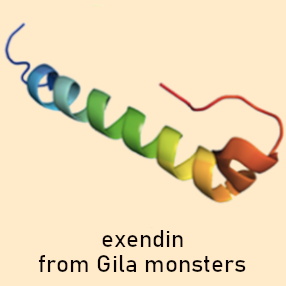 The pain medication Prialt is derived from ω-conotoxin from the venom of the cone shell (Conus magus) [7]. ω-Conotoxins block calcium channels. The peptide can, thus, block the transmission of pain signals and contribute to the alleviation of pain. 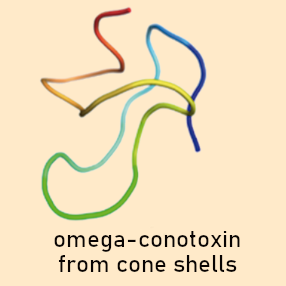 A toxin from the funnel-web spider Hadronyche infensa was found in animal studies to drastically reduce damage to neurons after strokes [8], and a toxin from a tarantula showed great potential for the treatment of Dravet syndrome [9], a form of epilepsy, in mice.

In addition, a variety of molecules with antibiotic and antiviral effects were isolated from the skin toxins of amphians [6]. Antimicrobial peptides like esculentin from the pool frog Pelophylax lessonae could be used as novel antibiotics in the future. 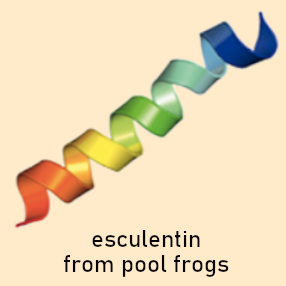 The peptide Hi1a from the funnel-web spider Hadronyche infensa inhibits damage to neurons after stroke. 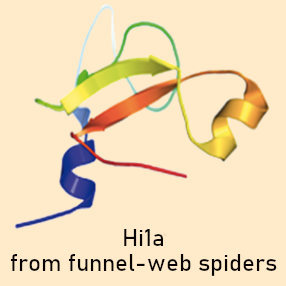 Venoms are also promising as a weapon in the war against vector insects. Versutoxin, from the funnel-web spider Hadronyche versuta, is toxic to many insect pests but not to honeybees and could be used as an insecticide to stop the spread of invasive vector insects. 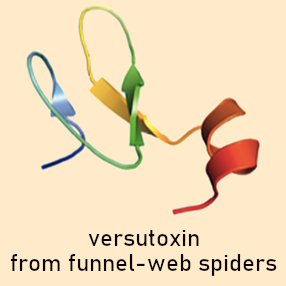 In the second part of this article, we will look at how venoms could be used as biopesticides to help prevent the spread of infectious diseases in the future, and what the new field of “venomics” is all about.

How can animal toxins be used in the future as biopesticides to help prevent the spread of infectious diseases? What is the new research field of “venomics” all about? (will be published on February 7, 2023)