This year, Finland celebrates a century of independence. Also this year, the European Chemical Agency (ECHA), located in Finland, is celebrating its 10th anniversary. In 2003, the EU was trying to decide on the location of ten agencies. At that time, Finland and Italy were vying to be the home of the European Food Safety Authority (EFSA). As a compromise, the Finnish government instead applied to host the headquarters of the European Chemicals Agency. Helsinki was proposed as the location. “The government made an excellent decision,” Juha Sipilä, Prime Minister of Finland, emphasized at the ECHA’s birthday celebration on June 7 in Helsinki. “We as Finns can be proud that we have been able to offer a place for one of Europe’s most important and largest agencies. However, the best is yet to come, along with future challenges and even greater victories.”

The ECHA celebrated its 10th anniversary at its headquarters in Helsinki under the motto “Learning from the past, designing the future.” Speakers from the ECHA’s management board, the ECHA’s administration, the European Commission, EU member states, and the European Parliament looked back on the foundation and initial objectives of the ECHA and its achievements, provided prospects for the future, and discussed the main challenges ahead. The overall opinion was that “a lot has been achieved, but there is still room for improvement.”

The ECHA manages the technical, scientific, and administrative aspects of the implementation of the European Union regulation on chemicals, namely, the Registration, Evaluation, Authorisation, and Restriction of Chemicals (REACH). The European Union enacted the REACH regulation on June 1, 2007, to better protect people and the environment from harmful chemicals in line with the United Nations sustainability goals for 2020. The complex REACH regulation was seen as very ambitious and revolutionary in terms of global policy on chemicals. With REACH, the responsibility to prove wheather a substance is dangerous shifted from the regulator to the companies making chemicals. Companies have to register their chemicals and document the corresponding hazards and likely levels of exposure. They also have to demonstrate how their chemicals can be used safely. This shift in mindset was a big concern: Some companies worried about workload and cost, some non-governmental organizations (NGOs) about reliability.

Before REACH there was a huge lack of knowledge about chemicals, and the process of testing was slow and cumbersome. However, getting REACH enacted was not easy. It took seven years from the time the legislation was proposed until it passed. Margot Wallström, Minister for Foreign Affairs, Sweden, and former European Commissioner for the Environment, helped set the scene for the launch of the new regulatory framework for chemicals in 2003 by having her blood tested; 28 rather dangerous chemicals were found in her blood, thereby providing a record of the chemicals to which Margot Wallström had been exposed and that had accumulated in her body.

The ECHA started with fewer than ten people in Helsinki. One year later, it had grown to 150. Today, about 600 people work for the now largest European agency. Most of the original staff are still there. In the near future, there will be more changes for the ECHA: Its offices will move to a new building in Helsinki; the Executive Director, Geert Dancet, will be leaving by the end of the year; and the May 2018 registration deadline – the last in a series of three – is just around the corner. This is the deadline for registering the least-hazardous substances and those produced or imported in the smallest volumes. This is a big challenge. The ECHA expects to receive information on up to 25,000 chemicals in around 50,000 new registration dossiers. It is expected that a large number of small- and medium-sized enterprises (SMEs) will register chemical substances by the 2018 deadline. Many of the SMEs have little experience with REACH. The ECHA has developed step-by-step guidelines for companies to follow, but it is important that EU member states and more experienced industry associations also help in this process. 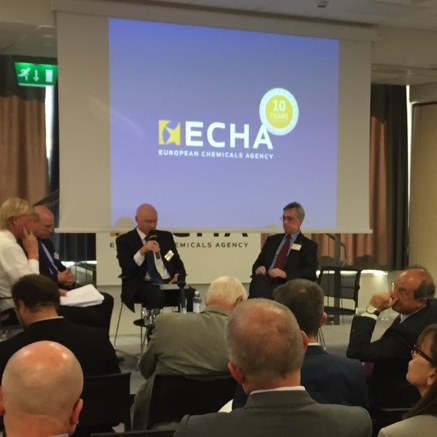 Geert Dancet, Executive Director of the ECHA, looked back over the last ten years with great satisfaction. Among the things that stood out, he mentioned the performance of the agency, which has delivered more than 95 % of its key performance indicators (KPIs) over the past ten years, and which has been working systematically together with all stakeholders, the institutions of the EU, EU member states, and their competent authorities and interest groups. In addition, the ECHA has developed ten world-class IT tools and a unique database to support data holders and regulators in their work. All of these systems launched at their promised times. Only one public entity has done that in the past decade. Other countries are looking to build on REACH for themselves.

ECHA has received more than 50,000 registration dossiers for about 11,000 substances. Germany, the UK, and the Netherlands have submitted the most registrations. Currently, data from around 48,000 registrations, with information on approximately 10,500 substances can be found on the ECHA’s website. Relatively simple summaries, called info cards, inform consumers about the hazards of each chemical and how to use them safely. In brief profiles, some 15 pages long, professionals can find the effects of chemicals on human health and the environment.

Geert Dancet also admitted that things are not perfect. A fundamental weakness of the system is that the quality of the data submitted by companies on the hazards of their chemicals is sometimes poor. ECHA performs an automated completeness check on each incoming registration. At least 5 % of the registrations of each tonnage band must be manually checked by ECHA. This means ECHA has been providing registration numbers, and by this access to the market, to many registrations by default even when they were incomplete, inadequate, or irrelevant. So the principle of “no data, no market” has not always been applied. The ECHA’s goal is to be able to identify and separate chemicals of serious concern from those that are of low or no concern. At the moment that is not easy to do because of the poor quality of the data. Manufacturers cannot communicate with their customers effectively enough about how to use the chemicals safely. Inadequate dossiers have to be completed by member state authorities who fill in the information that is missing. Here the burden of proof has not been shifted to industry.

The issue is being discussed and improvements will follow. The ECHA has already started to revoke some dossiers. “However, nothing stops proactive companies in line with corporate social responsibility from updating their registration and to make their registrations fully compliant now. The others will be woken up by evaluation decisions or enforcement actions,” Geert Dancet purges. Jeremy Wates, Secretary General of the European Environmental Bureau, appealed – over the head of the ECHA – to the member-state representatives and industry representatives at the celebration to support a “name and shame” approach. Why should those industries who are failing to submit responsibly completed registration applications be defended? In his opinion, the ECHA is being too cautious and too worried about offending the business community.

In addition, the authorization process needs to be quicker. A 2001 white paper estimated that 1,400 substances had hazardous properties that were of very high concern [1]. However, the Candidate List today includes only 173 and the Authorization List only 43. When a substance is identified as a substance of very high concern (SVHC) it is first included in the Candidate List for eventual inclusion in the Authorization List. These substances cannot be placed on the market or used after a given date unless an authorization is granted for their specific use, or the use is excluded from authorization. Another criticism was that when substances are being put forward for inclusion in the Authorization List, the precautionary principle is not being applied effectively or correctly when decisions are being made or in the preparation of the dossier decisions by the ECHA and its committees. Companies have been granted too much leeway to fight decisions, even when alternatives are clearly available.

Overall, the honesty of the ECHA in acknowledging that the pace and the manner of the implementation of REACH and the development to meet today’s challenges leaves a lot to be desired was appreciated. However, this is not just the ECHA’s responsibility but also the responsibility of the EU member states, the European Commission, and the business sector.

The next decade will be very turbulent politically, but within this conglomerate of uncertainties Björn Hansen, Head of Unit of Sustainable Chemicals of the European Commission, sees two certainties that will bring the ECHA forward and will establish a long-term path for it to follow. One is that the well-being of European citizens is largely dependent on chemicals. The European Chemical Industry Council (cefic) says on their website that the chemicals industry is the industry that enables all other industries. And that is true. Everything that we do as a consumer and that we do in the workplace is dependent on the functionality of chemicals. However, those same chemicals can also have a negative impact on our well-being. And that is why the ECHA’s role is entirely clear for the next decade despite all of the uncertainty.

Visions of where Europe and the ECHA are going include the setup of a one-stop shop for chemicals management, as well as pushing a chemicals and waste agenda, the circular economy, forward in a broad and international way.

For Saori Dubourg, Member of the Board of Executive Directors of BASF and Vice President of cefic, REACH and the ECHA are an inspiring example of how Europe can work together and contribute more to the world. “The chemical industry will continue to work with ECHA and all other stakeholders to make sure that REACH becomes the global currency of trust for chemicals.”

The enjoyable event was nicely moderated by Lindsay Jackson, Head of Communications of the ECHA. The event ended with a live music performance by ECHA staff and a cocktail reception.

“REACH and ECHA are good examples of what can be done to protect citizens only through a strong Europe,” Alain Perroy, former Director General of Cefic and member of ECHA’s first Management Board.