The GDCh Wissenschaftsforum (science forum), in short WiFo, was the highlight of this year’s celebrations for the 150th anniversary of the German Chemical Society (GDCh, Gesellschaft Deutscher Chemiker). In 1867, August Wilhelm von Hofmann founded the German Chemical Society (Deutsche Chemische Gesellschaft (DChG)), a predecessor organization of the GDCh. The GDCh follows in its tradition and organized a colorful “Chemistry Festival” in Berlin.

The Free University of Berlin, on the historical science campus Berlin-Dahlem, was the host of the WiFo and the 150th anniversary of the GDCh. Over 2,000 scientists from around the world met in Berlin from September 10 to 14, 2017 to discuss, exchange, and celebrate.

The Chemistry Festival opened with an impressive ceremony in the Konzerthaus at the Gendarmenmarkt on Sunday, September 10. The Konzerthaus was first constructed between 1818 and 1821 and is one of the main works of the most important European Classicistic architect, Karl Friedrich Schinkel.

Nobel Prize winner and GDCh honorary member Professor Roald Hoffmann, Cornell University, Ithaca, USA, was the keynote speaker at the ceremony. He was also honored with the newly created Primo Levi Prize. The prize is awarded by the German and the Italian Chemical Societies (GDCh and Società Chimica Italiana (SCI)) to scientists who are known for their chemical and humanitarian excellence. In his talk, Roald Hoffmann gave arguments on scientific, philosophical and social grounds for the value of diversity in science and in its practitioners.

The outstanding “Angewandte-Festsymposium” followed on Monday. Angewandte Chemie is the flagship journal of the GDCh. The journal was founded in 1887 for its members and today it is one of the leading general chemistry journals. In opening remarks, Professor Alois Fürstner,  Max-Planck-Institut für Kohlenforschung, Mülheim an der Ruhr, Germany, informed the huge auditorium about the change in editoring of Angewandte Chemie: Dr. Neville Compton will succeed Dr. Peter Gölitz as Editor-in-Chief of Angewandte Chemie effective on October 1, 2017.

Further details on the program, short previews of their talks, and the whole lectures can be found at www.chemistryviews.org/angewandtefestsymposium. 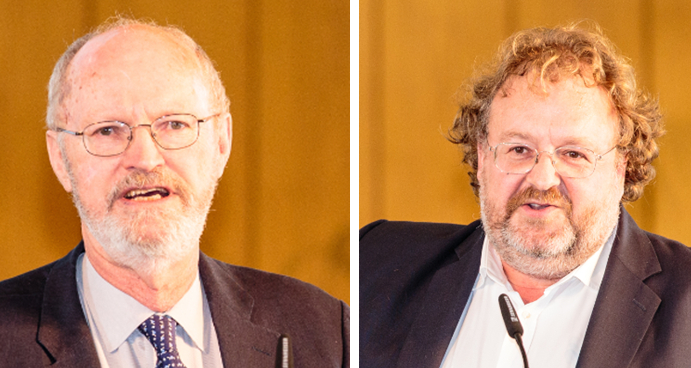 The Angewandte Festsymposium was also broadcast live online by ChemistryViews.org through a virtual event platform. The presentations were viewed by over 2,000 throughout the world as they happened in Berlin. All presentations were archived and are now available to be viewed on demand.

Scientific Sessions of the GDCh Divisions

On Tuesday and Wednesday, the divisions (Fachgruppen) of the GDCh organized their annual conferences and exciting scientific sessions. Every day started with three special plenary lectures.

Professor Petra Dittrich, ETH Zurich, Bern, Switzerland, held the first plenary lecture. She talked about lab-on-chip technology for synthetic and analytical challenges. Microfluidic systems offer numerous advantages, e.g., if the available sample quantities are very small, if work steps are to be automated or if the measuring device should be small and mobile, as for medical diagnostics.
Petra Dittrich’s group uses lab-on-chip technology to measure nano- and picoliter liquid volumes and to perform parallelized reactions and quickly and efficiently analyzes. By including living cells, they can observe characteristics and changes of cells. This can be used for fast testing of the toxicity of substances or the efficiency of medications.

Professor Melanie Schnell, Max-Planck Institute for Structure and Dynamics of Matter, Hamburg, Germany, presented broadband rotational spectroscopy as a tool to study molecular structure and molecular interaction with high sensitivity, high conformer selectivity, and showed that it is ideal to apply to molecular clusters. Microwave 3-wave mixing is a general approach to differentiate enantiomers of chiral molecules in the gas phase. With high-resolution molecular spectroscopy and ultra-rapid light sources, new molecular classes can be identified in the universe and chemical reactions under extreme conditions can be studied.

Synthetic carbohydrate vaccines serve as antigens against severe bacterial infections. Professor Peter H. Seeberger, Max Planck Institute of Colloids and Interfaces, Golm, Germany, explained that they are also recommended as tools for producing monoclonal antibodies and glycan microarrays for the detection of vaccine epitopes. The epitope is the part of an antigen that is recognized by the immune system. He has developed an automated sugar synthesizer. His developed designer sugars protect against bacterial infections such as the hospital germs but also other infectious diseases like malaria.

The symposia included talks on synthesis and catalysis; life sciences; energy, resources, and environment; inorganic chemistry; analytical chemistry, materials, and chemical education. The inorganic division (Wöhler-Vereinigung) and the solid-state and materials division (Festkörperchemie und Materialforschung) again ran a successful session of tandem lectures looking at a variety of interesting interdisciplinary topics from different viewpoints such as metal-metal interactions in molecules versus solids, and single-molecule magnets versus magnetism in extended solids.

Figure 7. During the breaks.

Figure 8. At the GDCh booth. (right) You could produce a button with your favorite molecule. (Photos © Christian Augustin, GDCh)

The European Journal of Organic Chemistry (EurJIC) and the European Journal of Inorganic Chemistry (EurJOC) were launched in 1998 as the result of a merger of several chemistry journals owned by European chemical societies (who would later form ChemPubSoc Europe). In the year before, in 1997, the first courageous step was taken by the Dutch and German chemical societies (KNCV and GDCh) when they merged their journals.

To celebrate the 20th anniversary of this successful merger a reception was held at the Wiley-VCH booth by Professor Floris Rutjes, Radboud Universiteit, Nijmegen, The Netherlands, Dr. Eva E. Wille, Wiley-VCH, and Dr. Haymo Ross, Editor, EurJOC, Wiley-VCH. It was very fitting that Floris Rutjes is not only the EurJOC Editorial Board Member representing the Netherlands but is currently also president of the KNCV. Smoothies were served to symbolize the smooth transition from the predecessor journals to EurJOC and EurJIC.

Figure 10. (right) While Professor Burkhard König, University of Regensburg and Chairman of the Editorial Board and Haymo Ross (Editor) are holding print copies of the 1996 issue of Chemische Berichte and 1997 copy of Liebigs Annalen/Recueil, respectively, Floris Rutjes is shown with a bottle of a EurJOC/EurJIC smoothie. (middle) Close-up view of the EurJOC/EurJIC smoothies. (left) Keen to get a taste of the best mix in chemistry!

The question of the role of chemistry in the context of major future challenges was discussed with all participants in small groups. The idea is to create a final communiqué from the discussion results that radiates beyond the chemical community into the general public and also reaches political decision makers. 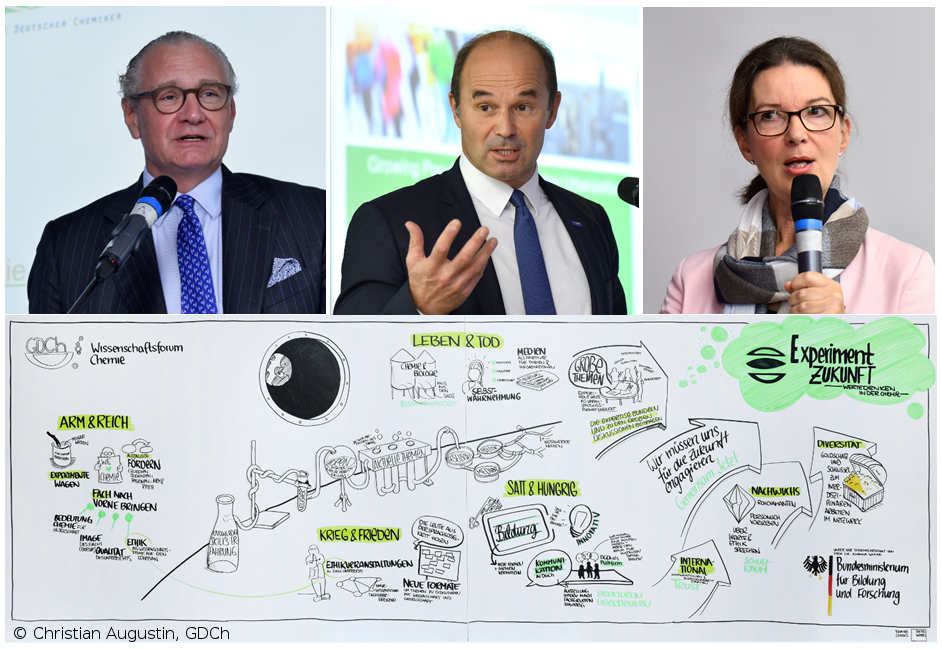 The Free University of Berlin is one of the most active universities in Germany with regard to start-ups. Research translation into the economy plays a central role on the campus. For this reason, in the context of the WiFo, a so-called hackathon, together with representatives of the chemical industry, was organized to further develop and popularize entrepreneurship. Hackathons typically start with presentations followed by discussions to generate ideas and suggestions which can last up to several days.

To commemorate the founding of the German Chemical Society, a memorial plaque was unveiled on September 10, 2017, in front of the entrance of the Jacob-und-Wilhelm-Grimm-Zentrum (library of the University of Berlin), Geschwister-Scholl-Straße 1/3. On September 15, a satellite symposium on “Thinking the Unthinkable” took place. Other activities included a Job fair, Creavis Lounge, ChiuZ-Storylab.

The 150-year celebration also focused on the successful communication of chemistry to society. A special point of interest was, therefore, the various offers for pupils at the WiFo, such as the ChemSlam, Meet the Hero, or the student labs.

With “Meet the Hero”, high school students were given the opportunity to talk to speakers of the Angewandte Festsymposium. Six groups of students from Berlin used this chance to receive helpful information from their “Hero”.

Together with the University of Potsdam, the universities of Berlin offered pupils (5th – 13th grade) a day in the lab to carry out experiments.

The chemistry slam ChemSlam demonstrated how easy to understand, exciting, and funny chemistry can be. Scientists or chemistry students presented their topic in seven minutes in a simple and entertaining way. The audience determined the winner.