On June 11, 2018, the doors of the exhibition halls in Frankfurt, Germany, opened for approx. 3,700 exhibitors from 55 countries and approx. 170,000 participants from more than 100 countries. The ACHEMA is held every three years for five days by DECHEMA Gesellschaft für Chemische Technik und Biotechnologie e. V. (Society for Chemical Engineering and Biotechnology) to showcase the latest equipment and innovative processes for the chemical, pharma and food industry. As in 2015, more than 50 % of the exhibitors came from outside Germany. The largest exhibition groups beyond Germany came from China and Italy.

A clear trend this year was digitalization. Ideas on how digitalization can improve laboratory equipment, plant engineering, packaging, logistics, or research have been discussed and many examples have been shown. Different systems and devices in the lab will communicate autonomously, process flows will be automated, digital support for all workflows will be available, e.g., goggles will show instructions and raise an alarm if necessary. Safety and reliability will improve and operations simplified. Augmented reality could be seen at many stands to experience plants and equipment.

ACHEMA had three focus topics: Flexible Production, where modular solutions and intelligent components for the plant of tomorrow were shown, Chemical and Pharma Logistics, where a focus was on the integration of the supply chain, and Biotech for Chemists, where biotechnological processes are integrated into the chemical industry. The latter is of great interest to biopharmaceutical producers as well as the chemical industry, where increasingly chemical and biotechnological steps are combined, especially in the production of fine chemicals. Other big topics included process efficiency, new materials, and energy. Of course, topics heavily discussed in the press such as microplastics and a plastics-free-Europe were also covered.

Professor Rainer Diercks, Chairman of DECHEMA e.V. and President of the Petrochemicals Division of BASF SE in Ludwigshafen, Germany, and Professor Kurt Wagemann, Managing Director of DECHEMA e.V., opened ACHEMA 2018. During the ceremony, Nobel Laureate Sir Fraser Stoddart spoke about serendipity in chemical discovery and the winners of the DECHEMAX award and the Gründerpreis were honored.

2.1 Fostering Interest in Chemistry
More than 3,300 teams registered for the student competition DECHEMAX this year. In a first round, the teams had to answer one question per week. 800 teams then entered the second round focusing on experiments related to chemistry and biotechnology. The students had to observe, do research, test, explain, tinker, grow cell cultures, and write experimental reports. The three best teams were honored with the DECHEMAX Awards:

The students had a lot of fun with the experiments, the design of which had to be devised by themselves. They said that they all can imagine studying something related to sciences – maybe not necessarily chemistry.

2.2 Most Promising Start-Ups
The ACHEMA-Gründerpreis 2018 (ACHEMA Start-up Award) was awarded for the second time. It is organized by DECHEMA, the Business Angels Frankfurt Rhein-Main, and the High-Tech Gründerfonds. Entrepreneurial scientists, future founders, and owners of start-ups were invited to apply for the award. 21 candidates submitted their applications, ten of them were invited for a presentation to a high-ranking expert jury. Eight finalists had the opportunity to present their innovation at ACHEMA. Three of them were selected to receive the ACHEMA-Gründerpreis which is endowed with 10,000 Euro for each winning team.

2.3 Serendipity in Research
The Keynote Lecture was held by Sir J. Fraser Stoddart, Northwestern University, Evanston, IL, USA, who was awarded the 2016 Nobel Prize in Chemistry jointly with Jean-Pierre Sauvage, University of Strasbourg, France, and Bernard L. Feringa, University of Groningen, the Netherlands, “for the design and synthesis of molecular machines”.

Sir Fraser Stoddart gave the opening lecture entitled: Serendipity Strokes Discovery: Disrupting Established Industries. On his Twitter account, Sir Fraser Stoddart posted shortly before his talk: “I will be introduced unusually by a moderator who will fire a few questions at me before I give the Opening Lecture”. So he had to explain when first applications of molecular machines will be seen and if he was aware of the significance of his work when had discovered rotaxane.

The Nobel Committee compared the molecular motor with the electric motor. Anyos Jedlik produced the first electric motor in 1827, still unaware of what it would lead to. Only in 1882, it was used for a fan, in 1885 for a food mixer, in 1920 for a hairdryer. Stoddart hopes to live to 100 to see first applications of molecular machines. Like for the electric motor, it is difficult to predict applications today. Materials sciences might benefit enormously. Another inspiration came via Twitter to Stoddard: They could be used in swarm intelligence and for nanobots.

Stoddart said the first time he used the word molecular machine was in a JACS paper naming rotaxane, which they called a molecular shuttle, a forerunner to molecular machines. He said he had to fight hard to keep this “hype” as the Editor called it, in the paper [1].

Although talking about serendipity in his talk and giving examples where serendipity has visited his lab, for example, when discovering a family of porous metal‐organic frameworks (CD‐MOFs) and a system for gold sequestration and recovery, both based on cyclodextrins (CDs) [2], Stoddart considers his research that lead to the Nobel Prize “a little bit more incremental”. It was built on observations which started when he worked in industry at Imperial Chemical Industries (ICI) Corporate Laboratory in the late 70s with the wheat killer paraquat. This was the spark for the development of ultimately shuttles and switches and then machines. “All was an up and backward move from step to step to step”, as he said.

Figure 2. Sir Fraser Stoddart signed copies of his book The Nature of the Mechanical Bond at the Wiley/Wiley-VCH stand.

3.1 Celebrating 90 Years CIT
The journal Chemie Ingenieur Technik (CIT) publishes its 90th volume this year and celebrated this with a reception at the Wiley/Wiley-VCH stand. CIT is owned by the German Chemical Society (GDCh), and is associated with DECHEMA and VDI-GVC (Association of German Engineers and Society for Chemical Engineering). It is a host for publications in chemical engineering and industrial chemistry bridging the gap between fundamental science and applications. It was founded in 1928 out of Angewandte Chemie and thus is the first in a series of successful Angewandte spin-offs. 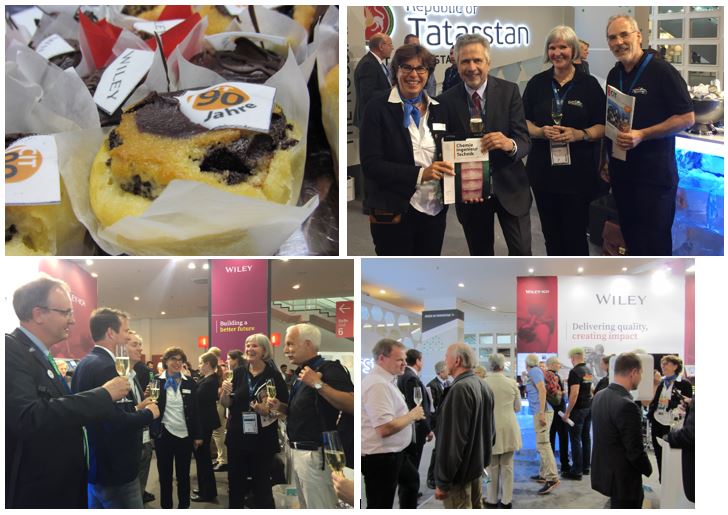 The Center for Chemical Process Safety (CCPS), a society within the American Institute of Chemical Engineers (AIChE), held a session on process safety case studies. The event was chaired by Shakeel H. Kadri, Executive Director of the CCPS. Paul McCulloch, CGE Risk Management, UK, and other speakers talked about typical process threats such as corrosion, improper operation, human-error, operational upsets [3], how to avoid them, and how to learn from accidents for the future. So-called Bow Ties steps – such as identify hazards, define the point in time when control over the hazard is lost, define threads, define consequences, define barriers or measures taken to prevent or mitigate the event, define escalation factors, a condition that defeats or reduces the effectiveness of a barrier – are helpful, but process safety also benefits from digitalization, as Dries Goossens, Siemens, Belgium, explained.

3.3 Process Safety in China
In her talk, Jenny Wang, CCPS Staff Consultant, Brussels, Belgium, discussed process safety in China and if there is a faster way to improve it. China is the second largest economy after the United States. The GDP (gross domestic product) Annual Growth Rate in China averaged 9.63 % from 1989 until 2018. China is on the rise to overtake the United States as the world’s largest producer and consumer of chemicals.

However, the rapid industrialization and urbanization lead to challenges around safety and environmental issues. A growing public frustration over the quality of life has become a strategic concern for the Chinese leadership. It seeks social stability through cleaner, more balanced economic growth that improves lives in ways beyond increasing incomes.

Jenny Wang said that China is a much safer place to work than a decade ago but accident rates and death tolls are still comparatively high. China is showing leadership commitment to substantially enhance process safety. It is strengthening regulations, codes, and standards, clarifying and holding accountabilities, establishing management systems, and learning from accidents and worldwide best practices. 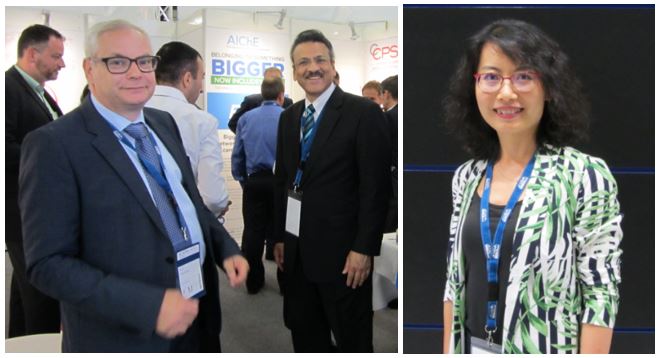 3.4 Containment in Process Engineering
The growing market for allergy-appropriate foods – be it the nut allergy or gluten intolerance – makes it necessary for the food industry to exclude cross-contamination on the production line. Therapeutics become increasingly active and only a few grams of an active molecule is needed. The specification for two new cancer products introduced in the US, e.g., is 0.1 ng/m³. In addition, regulations are becoming stricter. The number of substances classified as hazardous is increasing. This also requires hermetically sealed process flows for the chemical industry.

Containment offers optimal protection of the operator against contamination and at the same time protects the product from the operator. Challenges include knowledge deficits and missing definitions and standards [4]. Occupational Exposure Band (OEB) assigns chemicals according to their toxicological potency and adverse health effects associated with exposure to them into categories or bands. OEB 5, for example, means contamination of less than 1 µg/m³. However, many companies use their own standards. Containment has to be integrated into a process instead of adapting it to the process. New and innovative solutions are needed.

In the context of increasing digitalization, it could be advantageous in the future if no humans are involved in the production of highly-active substances.

3.5 Lab of the Future
The innovation network Smartlab, funded by the Federal Ministry of Economics and Technology (BMWi), aims to realize the vision of an intelligent and linked laboratory. The network showed workflows and how Industry 4.0 can be used in the lab: smart glasses help in carrying out an analysis, sensors measure non-invasive parameters such as pH, CO2, O2, i.e., it can be measured through glass or plastic without taking a sample. Non-contact sensors enable measurements in different vessels and different vessel sizes with constant accuracy.

The aim of the network is the development and standardization of innovative laboratory technologies and related applications and solutions. With their help, processes should be simplified, quality improved, efficiency increased and process reliability increased at the same time.

Jürgen Nowicki, Chair of the ACHEMA Exhibitors Committee, emphasized that international trade is essential for the exchange of products and services as well as for innovations at the opening press conference. Free international competition is a prerequisite for a platform like ACHEMA.

Dr. Utz Tillmann, Director-General of the German chemical industry association (Verband der Chemischen Industrie e.V.; VCI), emphasized the continuous positive outlook for the chemical industry in Germany. However, he also warned against new geopolitical risks arising from the protectionist trade policy of the United States as well as from China’s industrial policy strategy. Tasks such as the fight against climate change can only be solved globally and on a level, competitive playing field. Tillmann thinks that at least for the countries of the G20, who are responsible for 80 % of global CO2 emissions, uniform conditions should apply in climate policy. The reductions in greenhouse gases should lead to a comparable global competitive environment for the industry. He recommends to set a common CO2 price set politically via an emissions trading system as in the EU or as a uniform CO2 tax.