The popular comic book character and movie icon Captain America has shown marvelous powers in fictional adventures for decades, but can the extraordinary features of this superhero truly exist? This article aims to explain the hypothetical chemistry and biochemistry behind the transformation of the frail soldier Steve Rogers into the superhuman Captain America, his cryogenic preservation, and the material of his distinctive shield.

Introduction to the Marvel Universe

Marvel Comics has been publishing monthly American comic books since 1939, featuring well-known characters such as the Incredible Hulk, the Mighty Thor, the Invincible Iron Man, and Captain America. These illustrated adventures are special because most of the fictional characters operate in a single reality known as the Marvel Universe. In this universe, heroes are organized into powerful teams such as the Avengers.

Starting in 2008, the same characters hit the big screen in multiple blockbuster solo-films, known collectively as the Marvel Cinematic Universe. The films regrouped the silver screen stars into the teamwork movie franchise “The Avengers”. Considering that the chemistry of this team of unique headstrong characters is designed to provide more than entertainment, the molecular makings of these superheroes merit examination under the “atomic-farce” microscope, which probes herein Captain America, the Avenger’s tactical field-leader.

“You are a laboratory experiment, Rogers. Everything special about you came out of a bottle.” [1] Perceptive if a bit insensitive, Iron Man’s description of Captain America sums up the origin of the red, white, and blue icon of the Marvel universe. Injected, irradiated, defrosted, and protected by chemistry, Captain America is a product of superhero molecular science. 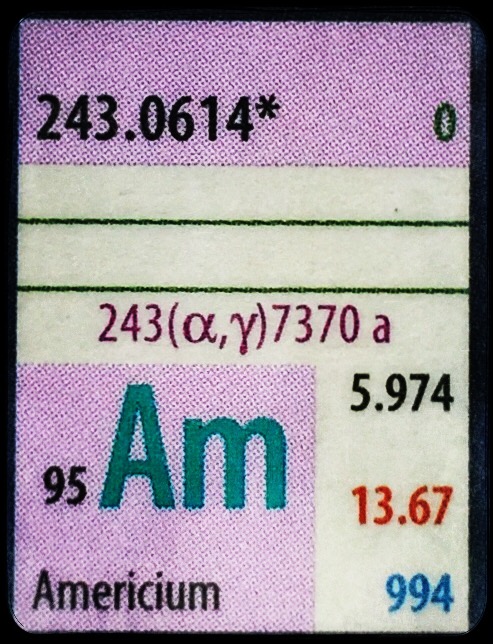 Like Captain America, the synthetic element Americium (Am, element 95) was the result of an experiment. It was synthesized in Nobel Laureate Glenn T. Seaborg’s laboratory at the University of California, Berkeley, USA, in 1944 by bombarding plutonium with neutrons. Americium was kept secret before a public release in November 1945 [2,3]. Until today, tiny amounts of the radioactive isotope americium-241 are used in the ionization chambers of commercial smoke detectors [4]. It serves as an unsung folk hero which has saved countless lives by warning Americans and Europeans to avoid the dangers of smoke.

Captain America’s incredible strength, too, was first hidden. His alter ego Steve Rogers posed as a clumsy infantry private at Camp Lehigh in Virginia while covertly performing missions on American and European soil. “Captain America”, his codename, was a symbol of hope to motivate troops under attack in Europe.

What Could Be in a Super-Soldier Serum?

Steve Rogers, a frail young man too fragile for the front line, but with a sense of duty, volunteered for a top-secret performance-enhancing military experiment. Through injections of “Super-Soldier Serum” and blasts with “Vita-Rays”, Rogers was chemically transformed into a broad-shouldered soldier having off-the-charts strength and stamina [5–8].

Although our bodies naturally produce testosterone, the hormone responsible for muscle mass and strength, a faster-acting version of the steroid would be needed for the rapid transformation of Steve Rogers. Notably, synthetic anabolic steroids like testosterone were used to facilitate the growth of skeletal muscle as far back as the 1930s [9].

Growth hormones may be another Super-Soldier Serum component. Their excess production during childhood results in gigantism. Like the fictional Steve Rogers, the Austrian Adam Rainer, born in 1899, attempted to join the Army as a teenager during World War I, but was rejected due to his short 4’6″ stature and generally weak body. Without Captain America’s laboratory procedure, Rainer grew to a height of 7’1″ by the time he was 31 years old. This was caused by an overproduction of growth hormones from a tumor pressing on his pituitary gland [10,11].

Perhaps Rogers retained his youthful physique, low body fat, high muscle mass, and strength due to mutations targeted at the gene for the protein myostatin. Myostatin is important for movements that restrain muscle growth. Geneticists Se-Jin Lee and Alexandra McPherron, Johns Hopkins University School of Medicine, Baltimore, USA, genetically removed (“knocked out”) the gene encoding myostatin to make “Mighty Mice” that have approximately twice the muscle mass as normal mice [12]. However, genetic engineering technologies are the only way to make a targeted mutation. These technologies did not exist in Captain America’s time—at least in the real world.

An American boy born in 2005 showed the rare genetic condition called myostatin-related muscle hypertrophy, or muscle enlargement [13]. Liam Hoekstra at age three had abs of steel, and his skeletal muscles continued to grow without affecting his heart, giving him super strength with >140 % normal muscle mass. Despite needing to eat six meals a day, Hoekstra gains no body fat. Another case of this condition, in a German boy, had been reported in the medical literature in 2004 [14].

As early as the 1920s, Alfred F. Hess and Mildred Weinstock, Columbia, University, NY, USA, confirmed the dictum that “light equals vitamin D” [15–17]. The metabolites of vitamin D have recently been shown to have distinct effects on human skeletal muscle function and gene expression [18]. Vitamins are nutrients that cannot be created by the body and, therefore, must be taken in through our diet. Vitamin D, “the sunshine vitamin”, may be considered a hormone, because it can be synthesized by the body as a response to sunlight exposure.

Required for the regulation of calcium and phosphorus minerals found in the body, vitamin D plays an important role in maintaining proper bone structure. It can also be obtained from food and supplements. Vitamin D deficiency may lead to fatigue, painful bones, impaired wound healing, and muscle pain, yet at extremely high doses over a long period of time, vitamin D may cause excessive buildup in body mass. This can cause hypercalcemia (or high blood calcium levels), nausea, stomach pain, bone loss, and kidney failure. [19]

Imagining the potential key ingredients of Super Serum and Vita-Rays, we submit to the power of fiction to substantiate how Rogers was prevented from suffering the detrimental effects of steroids and UV-irradiation, such as heart attacks, liver disease, and delusions [20], or sunburn, skin cancer, and eye disease [21].

Could a Frozen Captain America Be Reanimated?

After WWII, public excitement for soldier heroes waned, and the publishing of Captain America comics was put on ice in the 1950s. However, in 1964, Marvel Comics hatched the idea of a superhero team. Wanting to use a forgotten hero to lead this group named the Avengers, Marvel Comics explained that in the final days of World War II, Captain America had fallen from an experimental drone plane into the North Atlantic Ocean and was frozen in a block of ice. After decades in suspended animation, Captain America needed to be defrosted.

Notably, Walt Disney, the founder of the eponymous company that purchased Marvel Comics in 2009 for $4.24 billion, was falsely rumored to also be preserved through cryogenics, but was instead cremated following his death in 1966 [22]. The chemistry of water inhibits typically cryogenics, because the liquid grows in volume when turned to ice. Ice usually forms sharp crystals that may pierce cell membranes and damage cells permanently. Although it may have been easy for Steve Rogers to freeze in an iceberg, something in his cells would have been needed to prevent them from looking like Swiss cheese when revived.

Certain fungi, bacteria, plants, fish, and frogs all can survive prolonged exposure to sub-freezing temperatures without any harm [23]. These creatures contain antifreeze proteins, which can restructure ice to form more rounded shapes to protect cells from cold damage [24]. Perhaps Captain America was given the capacity to express similar antifreeze proteins as part of his Super-Soldier Serum.

Another component of Super-Soldier Serum may have been glycerol, which prevents excessive cellular shrinking by ordering water molecules to avoid their loss by osmosis and dehydration on freezing. Chemists studying human tissue and organ cryopreservation for medical applications are pursuing such components for uses such as assisted reproductive technology and transplantation [25–31]. However, although glycerol and other cryoprotectants are used in current preservation techniques, the amount required is much larger than what could likely have been included in the super-soldier serum injections.

High-Performance Materials as Strong as Vibranium?

Vibranium, the fictional material of the shield of Captain America, is said to be of extraterrestrial origin. Meteorite components were part of the studded gold medals awarded to athletic heroes at the 2014 Winter Olympics in Sochi in honor of the one-year anniversary of the extraterrestrial strike that damaged the Russian city of Chelyabinsk [32]. However, the primary component of this “chondrite” meteorite is iron.

Shields have been made from iron since antiquity, but modern thinking in the chemistry of shield making has turned further back in time to 24,000 B.C. when the crafting of ceramics began. Still not quite as light and resilient as the fictional vibranium, today’s ceramic shielding from materials, such as aluminum oxide, silicon nitride, boron carbide, titanium diboride, and tungsten carbide, can weigh ≈50 % less than traditional steel, be nearly as hard as diamond, and capable of deflecting and absorbing energy from impact [33].

Captain America does not only use his iconic shield to absorb blows of any caliber (punches, bullet shots or the hammering of a god), he bounces it off multiple walls and has it make its way back to him like a boomerang. According to physics educator Kyle Hill from “Because Science”, Captain America’s shield bounces because vibranium is a perfect mixture of properties like elasticity and yield strength, which enable the shield to regain most of its kinetic energy [34].

The shield appears to follow the laws of elastic collisions, meaning momentum and kinetic energy are conserved after impact, similar to Newton’s cradle [35], the popular desk toy. If vibranium were a magnetic metal, the Captain could recover the bouncing shield by attaching a handheld magnet to his forearm. This concept was replicated by James Hobson from the YouTube channel “the Hacksmith”. Hobson takes gadget ideas from fiction and builds real, working prototypes of them. He used two electromagnets to catch and trap a metal shield [36].

What Can Captain America Teach Scientists?

Captain America inspires innovation. Chemistry has advanced significantly in efforts to enhance physical strength and stamina, to enable cryogenic freeze-thawing, and to shield and reflect against adversarial blows. But for those in wait for over-the-counter super-soldier serum, cryogenic sleep in a suspended animation chamber, or vibranium shields, Captain America offers some pragmatic wisdom:

“One of the most valuable traits a soldier or student can have is patience [37].”

[19] K. Zeratsky, What is vitamin D toxicity, and should I worry about it since I take supplements?, www.mayoclinic.org, 2018. (accessed November 2018)

[23] M. Scudellari, Icing Organs: Why scientists are so near and yet so far from being able to cryopreserve organs, The Scientist, February 1, 2013. (accessed January 2016)

[37] As stated by Captain America in the post-credits scene of the 2017 movie Spider-Man: Homecoming.

The authors thank Nicolas Ughen for the graphic illustration.

Dedicated to the memory of Stan Lee (1922–2018), who made his comic book debut with Captain America: “Everybody learns differently and everybody gets to a certain point from a different direction.”