What gave you the idea to use commercially available interlocking disks to resemble chemical structures?

The idea to use commercially available interlocking disks (ILDs) to build chemically relevant architectures occurred very spontaneously. One afternoon my son showed me his newest toy—a package of ILDs that my wife had bought for him—and asked me to join him in constructing models. I carefully examined the toy and came to the conclusion that the building blocks could be smartly and systematically used in the modeling of complex and high-symmetry topologies. I could easily relate the forming topologies to assemblies of nanoclusters and framework materials, as these materials are the subject of my primary research.

Furthermore, I was also well-aware of Professor Stoddart’s concept of “molecular Lego” and its impact on chemistry research and education. Nowadays, owing to this concept there are many types of reported activities and demonstrations in chemistry and STEM education that use Lego-type building blocks as a resource. Thus, it was clear to me that ILDs as new and previously unexplored non-linear binding blocks show much potential for application and inspiration in chemical education.

What are the advantages of the interlocking disks?

ILDs are inexpensive, light, globally available building blocks that can be assembled and disassembled rapidly in a damage-free manner. In such a form, ILDs possess most of the features that one desires for a modeling tool, thus making it a suitable resource for use by chemistry educators in both developed and developing countries.

However, the concept of ILDs, in which a single type of building block is sufficient to create large structural and high-symmetry complexity, may not be straightforward to everyone. Therefore, my group leader Professor Parac-Vogt and I saw a necessity to describe and point out the advantages of this educational resource in order to make it attractive for chemistry educators globally.

What other models exist? Have you created or experimented with other materials previously?

Classical balls-and-sticks are another tool that I also often use as a chemist and that I find useful prior to making models and quantum mechanical calculations of new molecular topologies. “Zometools” are another alternative to the classical balls-and-sticks, but they are more popular among mathematicians. In these materials, each ball-like object contains many extra holes in which to connect the sticks. The latter is very convenient. However, due to existing patents, it has a high retail price and its sales may be limited to particular countries.

How long did you experiment with interlocking disks? How do you use them in teaching?

Over the past year, I have been occasionally testing the structural “extremes” of the commercially available ILDs. Building ILD-based models is much faster than building models with any other type of inexpensive resource, such as, beads, bottle-caps straws, etc. Yet, it still takes time to properly document and describe the constructed models and to point out their use in teaching and learning.

Currently, ILDs can successfully serve as an alternative resource to many already developed and published educational activities based on Lego-type building blocks. Additionally, ILDs-based models of zeolites, metal–organic frameworks (MOFs), molecular polyhedra, DNA, and others can be used directly as static models for class demonstrations or for self-study. We have currently developed detailed activities and demonstrations based on ILDs that chemical educators can apply early on in the chemical curriculum.

What fascinates you about these hands-on manipulatives?

To me, the most fascinating thing about ILDs is their ability to be programmed into complex and high-symmetry architectures. To a certain level, there is an analogy with the formation of high-nuclearity molecular metal-oxides and reticular materials, in which simple precursor building blocks or sets of secondary building units are preprogrammed and readily self-assemble into fascinating chemical topologies.

Do you have a favorite structure?

I am fascinated by the beauty of Keplerates. In our recent work, we also constructed the cube-cuboctahedron Keplerate which is representative of some heteropolyoxometalates. In addition to this, I am impressed by the structure of the hyperdodecahedron, that is, the 120-cell, which has relevance in mathematics and that we recently built based on six-fold ILDs. 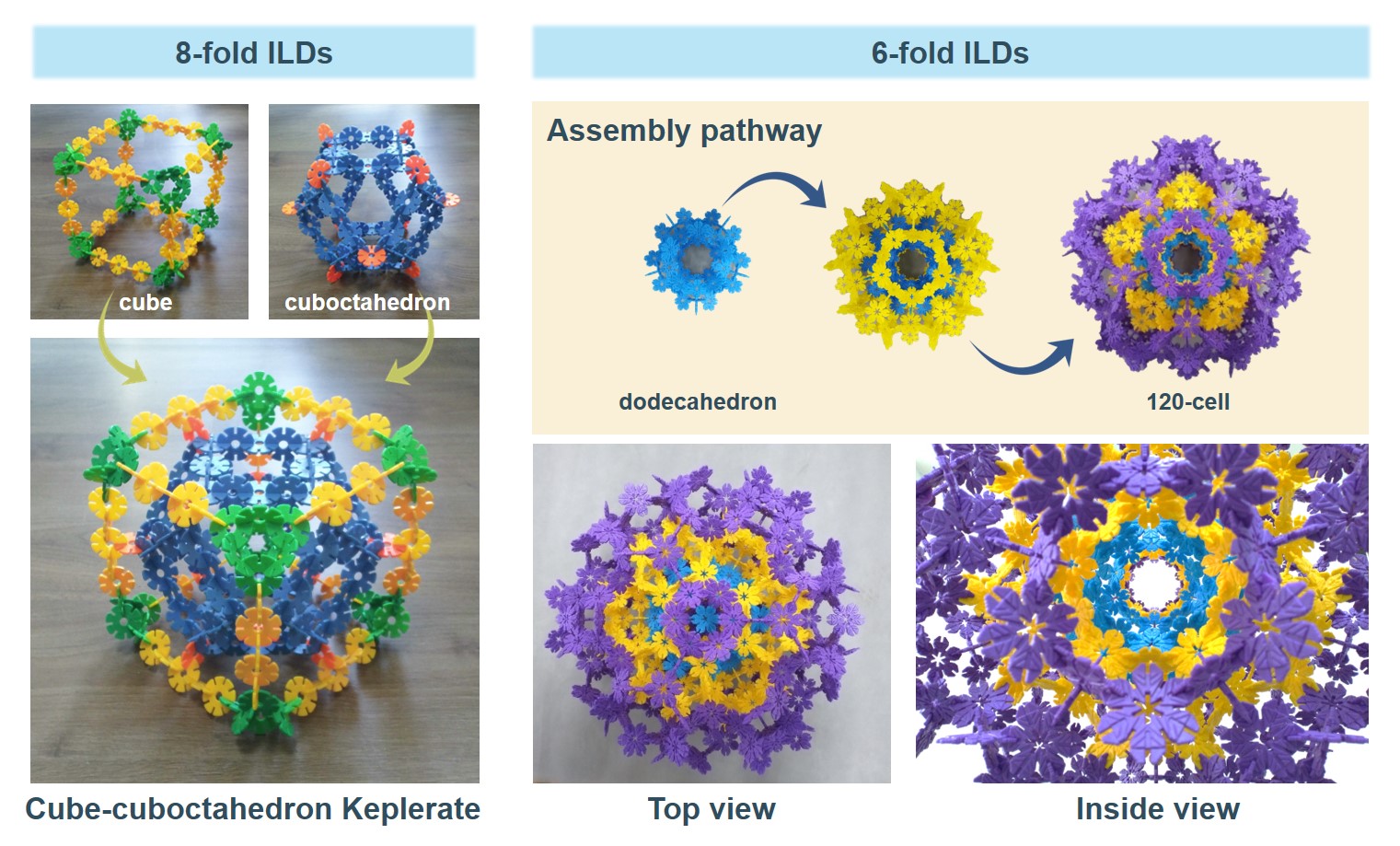 Figure 1. Cube-cuboctahedron Keplerate built of 8-fold ILDs (left) and 120-cell built of 6-fold ILDs in a step-wise fashion where each different layer/step is represented by using differently colored ILDs (right).

Why do you think that hands-on manipulatives are important?

Firstly, besides modeling structure, hands-on manipulatives in chemistry are used to clarify more abstract concepts. When limited to a structure, the models provide a visual insight, however, the process of structure modeling provides a sort of “fingertips feeling” for the presence of strain effects and on the structural robustness and stability. Indeed, one of the pioneers in strain theory, the Nobel Laureate Adolf von Bayer effectively gused physically built model systems to understand the structure-stability relationship in cycloalkanes.

Nowadays, we have many large and complex materials such as molecular clusters, polyoxometalates, reticular frameworks, nanotubes, and others, where the degree of strain predetermines the materials stability and formation. In that sense, I believe that early training of chemistry with hands-on manipulatives still has some advantages over computer-based graphics, as they can convey other insights besides just visual.

What reactions did you get?

Originally some of our colleagues, both chemists and mathematicians, were skeptical about the application of the ILD technique. This may be due to the fact that there are other techniques that are already known and available. However, very early on, we also obtained positive feedback and interest from STEM educators with years of didactical experience, and some of our theoretically focused colleagues who work with reticular materials could also see the analogy between modeling ILDs and modeling metal-organic frameworks. The latter encouraged us to further explore what types of model can be built based on ILDs and in which cases ILDs-based demonstrations can combine other hands-on manipulatives such as balls-and-sticks.

How will you follow up? What do you hope will result from your idea and work?

For the younger and ambitious readers of ChemViews Magazine, I believe that the story of the ILDs illustrates how opportunities to carry out original research are not always burdened by the necessity of using widespread resources. This is especially important during the early career when resources and time are limited.

Furthermore, I would like to encourage chemistry and STEM educators who explore hands-on manipulatives to also try ILDs in their work. As non-linear binding building blocks, they may provide a new spectrum of spatial skills and non-verbal intelligence in pupils and students which is important in the natural sciences. In this regard, we always remain open to sharing experiences and for possible collaborations.

What has been your biggest influence? What motivates you in your work?

Until now my research and career paths have been significantly influenced by the working and leading styles of the different research unit leaders, as well as the energy of the many talented, competitive, and collaborative peers and colleagues. My passion for fundamental research together with an interest to make meaningful contributions to science and society, have been another big driving force for me to continuously learn, explore, and report on new knowledge.

Tell us a bit about how your career has developed, please.

I studied chemistry in a highly international setting at Jacobs University in Bremen, Germany. During my undergraduate and graduate studies, I obtained skills to work comfortably at the interface between experimental and theoretical inorganic chemistry. At the beginning of 2016, I completed my doctorate under the supervision of Professor Thomas Heine—currently TU Dresden. For the next two years, I worked in the division of molecular magnetism at RWTH Aachen, Germany, which strengthened my interest to continue in the domain of inorganic chemistry. After successfully qualifying for a postdoctoral grant from the Research Foundation Flanders, in 2018, I joined the research group of Professor Parac-Vogt at KU Leuven in Belgium where I am currently working on an emerging and exciting class of hybrid inorganic-organic materials with relevance to bioinorganic chemistry.

When did your interest in science begin?

During middle school, I was very fascinated with the origin of various natural phenomena. It was only during high school though, that I started to actively learn chemistry and prepare for chemistry competitions. During this period, I often practiced solving competition-level problems, which were constantly keeping me intellectually challenged. The participation at the competitions provided me with international exposure. I liked both experiences and they happened to be very crucial for me in deciding to study chemistry at Jacobs University.

Usually, I dedicate my spare time to my family. However, when I have some additional free time, I enjoy reading scientific articles and archives with historical relevance. Some of these give me access to the ideas and hypotheses of brilliant scientists from the past, which I occasionally revisit as part of my research work.

Aleksandar Kondinski studied chemistry at Jacobs University, Bremen, Germany. He obtained his Ph.D. in chemistry in 2016 at the same university under the supervision of Thomas Heine. From 2016 to 2017, he worked as a research associate at the Institute of Inorganic Chemistry at RWTH Aachen, Germany, in the research unit of molecular magnetism lead by Paul Kögerler.

In 2018, he won a postdoctoral grant from the Research Foundation Flanders (FWO) and joined the laboratory of Bioinorganic Chemistry, KU Leuven, Belgium, led by Tatjana N. Parac-Vogt.