Giauque’s most prominent work concerns entropy and the third law of thermodynamics. This law states that the entropy of a closed system approaches a constant value as its temperature approaches absolute zero. For an idealized, perfect crystal, the entropy at absolute zero (S0) is exactly zero: S0=0. The law was formulated by Walther Nernst in 1906 and is also known as Nernst’s theorem. 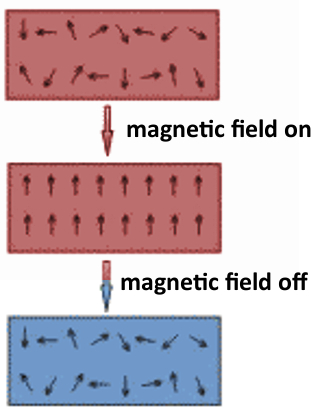 In 1927, Giaque developed a method in which a magnetic field is used to reach extremely low temperatures (well below 1 K). It can be used to provide evidence for the validity of the third law of thermodynamics. The method is called “adiabatic demagnetization” and was proposed independently by Peter Debye and William Giauque.

With this method, the material can be cooled to temperatures as low as a few thousandths of one Kelvin. Based on this work, the Nobel Prize in Chemistry 1949 was awarded to Giauque “for his contributions in the field of chemical thermodynamics, particularly concerning the behaviour of substances at extremely low temperatures”.

Giauque’s research group performed many entropy determinations at low temperatures, e.g., on condensed gases. His work on the entropy of oxygen led to the discovery of the oxygen isotopes 17O and 18O in the Earth’s atmosphere. Previously, it had been thought that only one isotope, namely 16O, existed, and 16O has been used to define atomic masses. This discovery caused problems with the definition of the unified atomic mass unit: Chemists used the weighted average of the masses of known oxygen isotopes, while physicists used the mass of pure 16O. The definition of the unified atomic mass unit was changed to one based on the mass of 12C in 1961, which was then used by both chemists and physicists.

William Giauque is the answer to Guess the Chemist (101).