Hartshorn salt, also known as hartshorn, or baker’s ammonia, used to be obtained from horn substance such as hooves or antlers. It is a mixture of two parts ammonium hydrogen carbonate (NH4HCO3) and one part ammonium carbonate ((NH4)2CO3) as well as some ammonium carbamate (NH4CO2NH2). It is a traditional leavening agent for baking gingerbread. Since it strongly promotes acrylamide formation, full or partial replacement with baking powder or baking soda is recommended (see belowunder Health Advice). 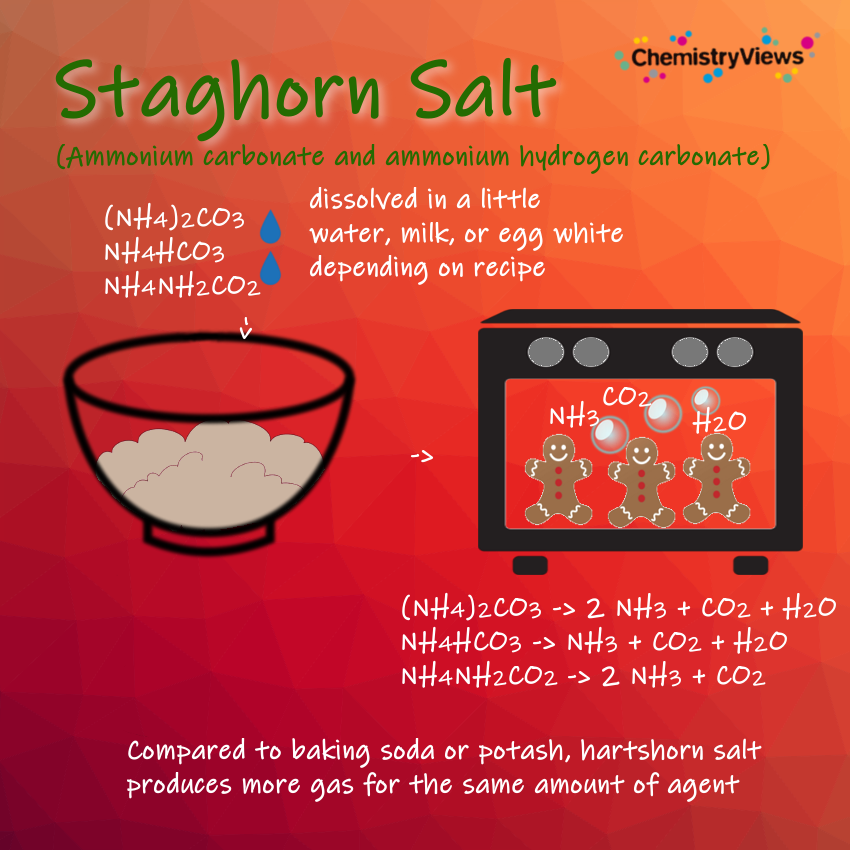 For flat, dry pastries, ammonia, like carbon dioxide, escapes through the air, so there is nothing wrong with occasional consumption of pastries containing hartshorn salt from this point of view. However, hartshorn salt is unsuitable as a leavening agent for higher, moist types of pastry, since the ammonia will be trapped and it may not be able to escape completely and reacts with water to form an ammonia solution. This is a health hazard. It discolors the crumb greenish, and the pastry will get an unpleasant taste.

Baked goods with hartshorn salt have higher levels of acrylamide. Ammonia released during the baking process reacts with glucose and fructose to form intermediates that in turn, react with asparagine, an amino acid found in nuts, seeds, and whole grains to form acrylamide. Acrylamide is found in many carbohydrate-rich foods that have been heavily heated and have a low water content. It potentially increases the risk of cancer in humans. In the adult diet, coffee and fried or deep-fried potato products are the largest sources of acrylamide, followed by cookies, crackers, crispbread, and toast.