Professor Kai Sundmacher is Director and Scientific Member of Max Plank Institute Magdeburg, Full Professor for Process Systems Engineering at the Otto-von-Guericke University Magdeburg, Germany, and is on the Editorial Advisory Board of the Ullmann’s Encyclopedia of Industrial Chemistry. He talks to ChemViews about his involvement with Ullmann’s, how chemical engineering is evolving and about the integration of bioscientific principles to chemical engineering and multi scale consideration.

You are a member of the Editorial Advisory Board of the Ullmann’s Encyclopedia of Industrial Chemistry? Can you tell us a bit about this position?

My tasks involve watching over the topic of general process engineering by updating articles or by identifying potential high quality authors.

In order to continuously develop the Ullmann’s further – and as advisors we probably play an important role in this – the content has to be constantly checked if it still is up-to-date. New topics have to be identified, and older articles have to be checked if they are still relevant and timely. The greatest challenge is to find qualified authors, especially from industry, who can invest time to update parts of the Ullmann’s Encyclopedia. Today this is difficult, because especially scientists from industry often lack time to address themselves to such tasks. On the other hand, the industry, including large companies, massively benefits from the existence of the Ullmann’s and uses its articles as an important source of information. So up-to-date information is extremely important for them. To maintain the Ullmann’s as the European standard reference work of industrial chemistry, the support of the chemical industry is necessary. So companies should encourage employees who would like to update the Ullmann’s to do so by giving them some time. 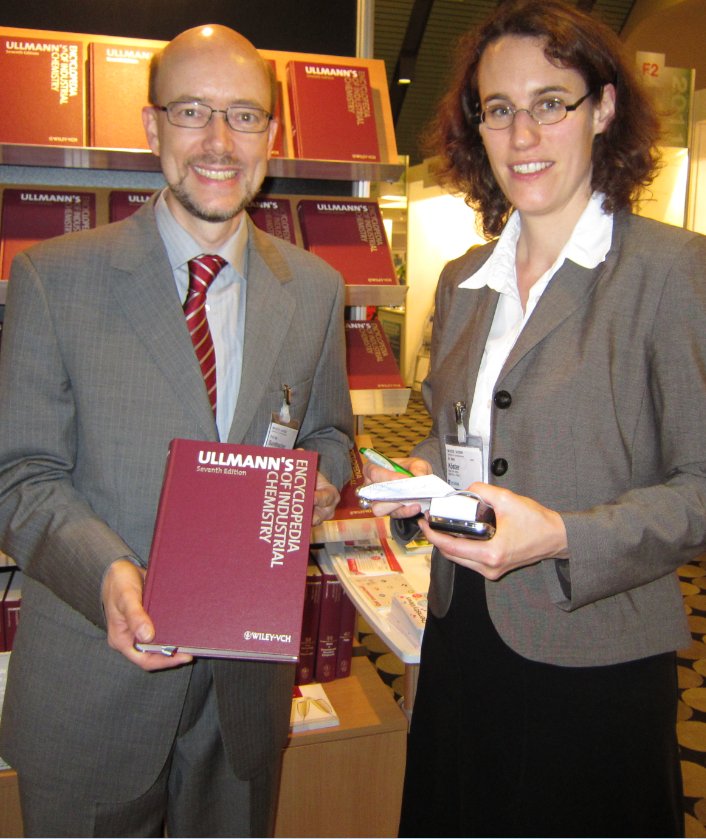 Do you remember when and where you first came in contact with the Ullmann’s?

It was during a student research project around 1986 on chemical technology. Our library had the then latest print edition of the Ullmann’s and I used it for my research.

I used the Ullmann’s constantly ever since I can remember, starting from the final exams of my basic study period. And I am very happy to see it having developed into what it is now and that there is a new print edition.

Do you personally prefer the print or the online edition?

That depends on the situation. Personally I enjoy holding a book in my hands. But for a fast search for preparing a lecture, for fast information or reassurance, I prefer the online version. For studying something in detail I prefer the print. However, in a digital world the fast access might win in the long run.

The Ullmann’s has been published in its 7th Edition: 3,000 authors from over 30 countries have contributed to 1,050 articles. The whole edition weights 60 kg. As a Board Member, do you think of the Ullmann’s as your book?

I feel associated and committed to the Ullmann’s.

My congratulations to the production team for preparing the 7th edition. They have really done a great job!

What do you enjoy most about your current position?

It should be more common that one not only does program-driven research, but that the scientists, the actors, have the freedom to follow their creativity. In the end you will need a balance between personal support as seen with the Max Plank Society and program-driven research as seen by governmental funding activities. Many breakthroughs were achieved by colleagues who had time and freedom to think intensively about a challenge or a set of problems and then could find a solution without any pressure. I think today very often single reseachers are pressed into a straight jacket which makes them unable to follow their creativity. So this is a point I am very pleased with at my position at the MPI. I can go about something new with very short notice by using own resources. This enables us to react very fast on new developments.

I can’t think of anything nicer than being a Director of a department at the MPI. I would like to stay in this position.

Within the next 20 years, I would like to increase the implementation of topics which I am convinced of that they have to be done. This is especially in regards to the consideration of a chemical process via different scales, that means from the construction plant to the single instruments to finally the single molecule. I think that this multi scale consideration, which also is very modern today, will be a sound basis to develop the next generation of chemical processes. Then you can hope that through this, new breakthroughs will be achieved in selectivity, productivity, and environmental compatibility.

And the second point is that I would also very much like to take into consideration biological systems. Now, so much knowledge is generated in the biosciences and on quantitative relationships, that engineers, especially chemical engineers, can apply their concepts profitably. I would like to start with integrating engineering with synthetic biology within my group to develop biosystems which will help us to improve chemical production.

So this looks like an exciting research future.
Thank you very much for the interview!

Kai Sundmacher studied mechanical and chemical engineering at the Universities of Hanover, Braunschweig and Clausthal, all Germany. After gaining his PhD in 1995 and his lecturing qualification in 1998 from TU Clausthal, he was a postdoctoral researcher at the University of Newcastle-upon-Tyne, UK. In 1999 he became a full professor for Process Systems Engineering at the Otto-von-Guericke University of Magdeburg, Germany, and since 2001 he is also the Director for Process Engineering at the Max Planck Institute for Dynamics of Complex Technical Systems in Magdeburg.