A burning candle seems far removed from the suspenseful world of chemistry, since it would appear to amount to nothing more than combustion of an organic compound:

An equation like the one above does indeed provide a straightforward description of the beginning and end of this combustion, but we are more interested here in the steps in between!

“There is not a law under which any part of this universe is governed which does not come into play, and is touched upon in these phenomena. There is no better, there is no more open door by which you can enter into the study of natural philosophy, than by considering the physical phenomena of a candle.” So declared the distinguished English chemist and physicist Michael Faraday in the first of his famous set of six “Christmas Lectures” on “The Chemical History of a Candle” [1, 2], delivered at the Royal Institution in London, UK, before youthful audiences in 1860 and 1861.

We attempt here to follow in Faraday’s tracks, and pursue the chemical fate of a candle from raw materials to festive combustion [3].

1. The Solid Block of Fuel

Until the middle of the 18th century, high-quality candles were made almost exclusively from beeswax. Such candles produced a superb flame, were attractive, and dispensed a pleasant fragrance, but they were considered a luxury item reserved primarily for churches, monasteries, and houses of the nobility. Ordinary people had to depend upon inferior, greasy candles based on ox-kidney fat and mutton tallow, which upon burning would give off large amounts of sooty smoke, and must have smelled horrible.

Table. 1 Chemical Composition Of Beeswax.
The trivial names applied to long-chain acids and alcohols are dizzying. For example, triacontanoic acid (C29H59COOH) is also referred to as “melissic acid”, and the corresponding alcohol (C30H61OH) as both “melissyl alcohol” and “myricyl alcohol”. Until relatively recently, the latter trivial name was also applied to corresponding C31 compounds. The definitive reference source, Beilstein’s Handbook of Organic Chemistry, originally applied the German equivalent of the name “hypogaeic acid” to hexadecenoic acid C15H29COOH (isolated from peanut oil), but after it was ascertained that various double-bond isomers are involved here, in the more recent Beilstein supplementary series this name no longer appears. Beilstein refers to both C30H60 and C30H62 as the German equivalent of “melene”, but in the meantime the only trivial names IUPAC permits for such substances are “palmitic acid” and “stearic acid”; all other long-chain acids, alcohols, and hydrocarbons are always to be named systematically.

In an industrial context, waxes would today be defined not in terms of their chemical, but rather their physical properties: ranging from transparent to opaque, melting above 40 °C to give low-viscosity liquids, and polishable by application of only a little pressure. A host of natural and synthetic materials display wax-like characteristics, and are suited to the manufacture of candles.

The first semi-synthetic wax was prepared by M. E. Chevreul in the early 19th century [4, 5]. He obtained it as a solid material upon alkaline saponification of lard, followed by acidification, giving something he called “stearin”. His stearin was hard at room temperature, and displayed the white opacity cherished by chandlers (candle-makers). Its 52–60 °C melting range was close to its softening point, so that a stearin candle retained its shape even in a warm room.

Stearin is today understood to be a mixture of palmitic and stearic acids.

Chevreul initially called a fatty acid he isolated from lard “acide margarique”, subsequently he renamed it to “acide stéarique”. This fatty acid later proved again to be a mixture: of hexa- and octadecanoic acids.

Paraffin has been employed for the manufacture of candles since the middle of the 19th century. A mixture of saturated hydrocarbons, it is now obtained almost exclusively from petroleum. The melting point of paraffin varies with the chain lengths of its constituents. Pure paraffins are colorless and transparent, and display a wide range of softening points. Candles made from paraffin occupy a market share today of over 95 %, with the remainder being based largely on either stearin (ca. 3 %) or beeswax (ca. 2 %).

The wick is the soul of a candle. Its job is to draw up toward the flame a sufficient amount of melted wax so that equilibrium can be established between the quantities of melted and burned wax. If it draws up too little, excess liquid wax collects at the base of the wick, and the flame is extinguished; if it draws too much, the wax is no longer able to burn completely, so the candle starts to smoke.

Our forefathers had their hands full dealing with inferior wicks. In residences of the nobility, “candle snuffers” were sometimes hired just to trim all the wicks before the candles began to smoke. In an ordinary household it was of course necessary that one deal with that problem oneself. The famous German author Wolfgang von Goethe once groaned: “I cannot imagine a better invention than candles that would burn without a need for trimming”.

Invention by Jules de Cambacérès in 1828 of the braided cotton wick, still common today, represented an important advance in the history of the candle. The drawing power of such a wick can be adjusted to suit the diameter and type of wax of the candle through alteration of the number of filaments. Thus, for a 10 mm candle (90 % paraffin, 10 % stearin), one needs a wick with 24 cotton filaments, but 33 are required for a candle whose diameter is 15 mm.

The burning qualities of a candle can be improved if one arranges it so that a helically braided wick will bend over to the side in the flame after it reaches a certain length, causing the tip of the wick to project into the hottest part of the flame. Then, as it burns, a kind of “automatic wick trimming” will take place. Further improvement is achieved by impregnating the wick with an aqueous solution of ammonium salts, boric acid, and phosphates. Ammonium salts prevent a wick from burning up too rapidly, while boric acid and phosphates produce a molten bead at the end of the wick, which in turn keeps pieces of ash from falling into the pool of wax, at the same time avoiding afterglow at the wick end when the flame is extinguished.

Candles are made in various ways, ranging from individual pouring in accord with time-honored tradition, to computer-controlled high-tech manufacture. The fundamental principle is simple: a centered wick must be coated with solid fuel (wax), either by use of a form into which the wax is poured, or by repeated dipping of the wick into liquid wax, or perhaps by somehow pressing a wax mixture around the wick. 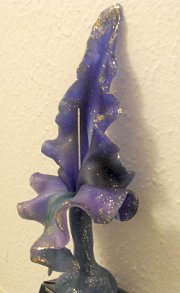 The wax itself may contain one or more agents to add cloudiness, and/or a soluble or finely divided dye. Cloudiness can also be induced by deliberate introduction of air, a process that can be used as well to prepare especially lightweight candles (“floating candles”).

Finished candles may be coated with colored wax, and preparation may be even further enhanced with a final artistic treatment of some sort (pictured, right).

Let us now consider the heat flow associated with a calmly burning candle (Fig. 1). A portion of the heat of combustion is utilized in melting the wax, which is then drawn by capillary forces into the wick and evaporated from the wick surface. In the course of its further journey, the gaseous wax burns, to give water and carbon dioxide. As in the case of a chimney, the rising of hot, light gases from the flame sucks fresh air from the surroundings in toward the base and sides of the flame. 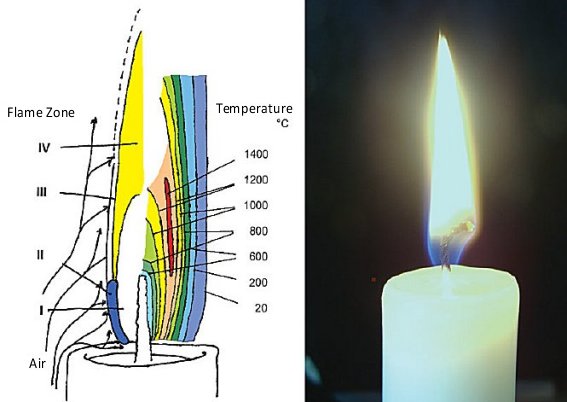 This cold air also cools the surface of the solid candle, so that the upper edge does not melt away. This in turn leads to formation of a solid rim surrounding a saucer-shaped depression filled with molten wax.

Overall, a stationary state is established between melting and burning wax, and the flame adopts an elongated form, the latter resulting directly from the upward lift accompanying the air currents.

5. The Candle — A Difficult Object to Study

Thorough experimental investigation of the flame from a candle is not actually possible. The reasons for this should be rather obvious: in the first place, the flame would not be stable within a closed piece of apparatus; furthermore, nothing in the combustion process itself is really subject to alteration.

One can of course vary such things as wax composition, the dimensions of the candle, or the material and geometry of the wick, but clearly not during combustion. Probes that might be introduced into the flame would alter its form and temperature distribution, thus distorting any resulting measurements.

It is indeed possible using modern contact-free laser approaches to establish instantaneous temperatures, as well as concentrations of certain components (e.g., N2, O2, CO, H2O), even with unstable flames, but this involves major effort and expense from an apparatus standpoint. As a result of such experimental obstacles, we in fact know very little regarding details of the real processes occurring within a candle flame. Nevertheless, there have been numerous careful studies of other, technically more important types of flames: e.g., those associated with the production of heat or smoke, or arising in combustions within various types of motors, jet engines, and rockets. The corresponding results make it possible with a certain measure of assurance to extrapolate to the case of a candle, providing us with at least an indirect picture of the chemistry inside this type of flame.

Zones of a Flame
In the gaseous phase, and at temperatures in the interior of a candle flame up to 1400 °C, there exist highly energetic intermediates that look quite exotic to most of us as they will not be found in introductory textbooks.

Chemistry of the Christmas Candle — Part 2

In part two we will pursue the fate of a single wax molecule in a burning candle, and also consider a candle burning in the absence of gravity.