The day was filled to capacity with 20 different talks covering one new and exciting idea after another. This might sound exhausting, but the excellent speakers easily managed to attract the attention of the audience in every talk.

The aim of the conference is to reveal possible solutions to the pressing problems all over the world, such as climate change, famine, poverty, healthcare, and security. The exciting and highly diverse conference took place in Berlin, Germany, on November 9, the anniversary of the falling of the Wall, reflecting the meaning of the Falling Walls conference.

The conference was opened by Johanna Wanka, German Federal Minister of Education and Research (BMBF). She emphasized the importance of the Falling Walls conference in fostering communication between scientists, politicians, and the society all over the world.

The first session focused on aspects of civil sciences and art. Olafur Eliasson, Universität der Künste, Berlin, Germany, and Ai Weiwei, Beijing, China, who joined through a live steam because he is not allowed to leave China, presented a novel peace of art.
A moon (see at www.moonmoonmoonmoon.com) where everyone is invited to leave a graphical mark. The moon should represent a world unlike the earth without any borders, open to everybody.

Mark Pagel, University of Reading, UK, an evolutionary biologist, explained how new creative ideas evolve. He stated that innovations are not so much the result of a stroke of genius but the result of the clever combination and modification of previously existing ideas and devices. A similar concept is found in evolution, where coping (duplication of the genome) and modifying (mutations of genes) together result in new properties.

An entirely novel concept for the treatment of mental disorders was presented by Sophia Vinogradov, University of California, San Francisco, CA, USA, during the second session. She and her group focused on the design, implementation, and evaluation of neuroscience-informed computerized exercises to help patients learn the difference between things their mind is making up and things that happen in reality. By using neuroimaging they proved that the underlying neural dysfunction is alleviated by the computer exercises, thus breaking the walls of psychiatric hospitals.


Importance of Collaboration and Communication

Stephen Friend, President of Sage Bionetworks, Seattle, WA, USA, presented how to break the walls of the established system in science of patents, publishing, commercial gains, and careers. His non-profit organization develops collaborative platforms, on which biomedical researchers can convene, interact, and exchange data sets and build on each other’s work. This is in contrast to the current system, where data are not shared unless they lead to a publication or a product. As a consequence a lot of valuable data is often lost or many researchers work on the same problem, instead of efficiently sharing their work.

Stephen Friend aims to induce a cultural shift to close the gap between common good and the individual interests of scientists, resulting in a democratization of biomedical research.

The wall of the concept of the blood–brain–barrier was broken by Michal Schwartz, Weizmann Institute of Science, Rehovot, Israel. The blood–brain–barrier was a long time thought to be impassable for any cells of the immune system. She was the first to discover the pivotal role the immune system plays throughout life in supporting brain plasticity, with important implications for behavior, cognition, coping with stress, and the progression of neurodegenerative diseases.

Keynote speaker of the Falling Walls conference was Sir Mark Walport, chief scientific adviser to HM Government and Head of the Government Office for Science, London, UK. He explained the extreme difficulties of communication between politicians and scientists. As an example Sir Mark Walport used the well-known discrepancies concerning climate change. The recently published Intergovernmental Panel on Climate Change (IPCC) 2013 summarizes numerous facts about climate change and states the likelihoods of certain events. However, politicians not only have to consider climate change but also have to ensure the security and the affordability of energy at the same time. As a scientific adviser the most important task is to give profound advice to the government, which is only possible if a network of scientists is involved in this task.

The third session was opened by Dan Shechtman, Technion – Israel Institute of Technology, Haifa, Israel. Dan Shechtman won the Nobel Prize in Chemistry in 2011 for his work on quasiperiodic crystals. However, his talk at the Falling Walls conference was not so much about chemistry but about the importance of entrepreneurship. In his opinion technological entrepreneurship is more important than ever in order to help developing countries to achieve economic growth and prosperity. In Israel he teaches entrepreneurship at classes in his university to hundreds of students each year and explains how to open a start-up company, not only considering practical aspects, such as marketing and law, but also taking into account the students’ fear of failure. Beside the knowledge and spirit for entrepreneurship, a successful start-up nation needs a high level of education for all students, a government that supports entrepreneurship, free market economy, and no corruption.

Rolf-Dieter Heuer, Director General of CERN, Geneva, Switzerland, was invited as a speaker at the Falling Walls conference for the second time, and he gave a talk entitled “Breaking the wall of the hidden universe II”. He explained the exciting time of the discovery of the Higgs boson – from the first hint hidden in the tremendous mountain of data to the final proof that they had really detected the Higgs boson, and confirming that the Standard Model of physics currently explaining how particles are behaving, is at least not entirely wrong. This insight saves us from throwing away 40 years of quantum physics but also shows that the real work has just begun, as the Standard Model only covers visible and ordinary matter, which only compromises 4–5 % of our universe. The secrets of the so-called dark universe still remain to be revealed to break further walls in our knowledge of physics. 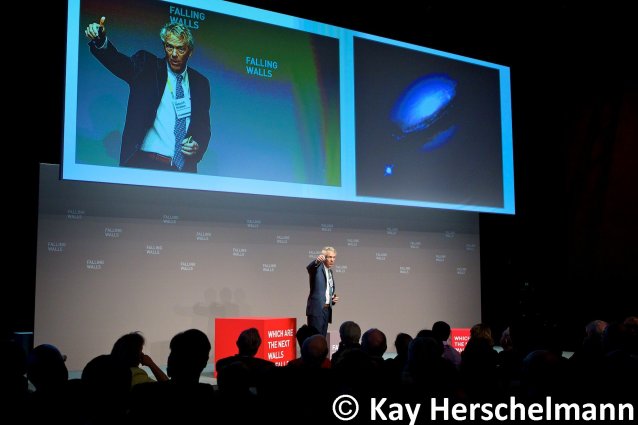 Robert P. Krishner, Harvard University, Cambridge, MA, USA, held an impressive talk about discovering that the universe not only expands but does this at an accelerating speed. He acheived this by observing exploding supernovae halfway across the universe and up to 9 billion years back in time. The cosmologist attributes this accelerating expansion to a pervasive “dark energy” overcoming the attractive forces between matter.

Falling walls were presented not only in physics but also in computing. Luc Steels, Universitat Pompeu Fabra, Barcelona, Spain, showed his work on breaking the wall to living robots. Previous concepts for making robots are based either on direct programming of them or programming them in a way that they are able to find necessary information in the internet. Steels used an entirely different approach. He analyzed how the human brain evolved to allow the genesis of language and applied a similar concept to the software for robots, thus allowing them to learn from each other and improve their knowledge about their own properties. Here the concept of trial and error is central, a concept you might recognize from children learning something new.
One of his robots was also present at the conference following the talk of his creator with great interest (see picture below).

Karlheinz Meier, University of Heidelberg, Germany, and Co-Director of the Human Brain Project, presented the falling walls of traditional computing. While it might seem that the processing power of computers will continue to increase, the power consumption, and waste of heat might rise to potentially unmanageable levels. Therefore, computing needs a new paradigm. Inspiration here is the human brain. Small silicon chips with over 300 different electronic devices simulate a single neuron of the human brain. The connection of more and more neurons step-by-step leads to the simulation of the human brain with super computers. Therefore, this project will provide a new tool to understand the human brain and its fundamental mechanisms and at the same time in the future this knowledge will be important for medicine and novel computing architectures.

Also with a focus on computational sciences was the talk of Michael M. Resch, Director of the High Performance Computing Centre and Institute, Universität Stuttgart, Germany. A lot of recent important scientific findings are based on simulations that demand a lot of computing capacity. As a Director of the High Performance Computing Center he supports researchers in academia and industry from various fields with his supercomputing, taking down the walls of highly complex simulations brick by brick.

Elvira Fortunato, Universidade Nova de Lisboa, Portugal, presented her efforts and success in electronics. The first part of her talk focused on transparent electronics, a subject you might know from the Hollywood movie “Minority Report”. This in fact is not science fiction anymore, but has become reality, as she demonstrated by presenting a transparent touchscreen during her talk. Since they use zinc oxide semiconductors their products are not only transparent, but also cheaper, biocompatible, recyclable, and also have better electronic performance.

A second goal of Fortunato is to produce a new generation of transistors based on cellulose. Cellulose has the advantage of being flexible, and its use would open up an entire new field to the applications of electronics.

Daniel Nocera, Harvard University, Cambridge, MA, USA, drew the guests´ attention to the consumption of energy in 2050, which is predicted to be 16 Terawatt more than needed today. Nocera, therefore, developed an artificial leaf, which, when placed in a glass of tap water and exposed to the sun, is able to split water into hydrogen and oxygen. The gases produced in this photosynthetic process can be stored and subsequently be used to generate electricity.

Breaking the Barriers for Young Scientists and Start-Up Companies

An incredible variety of sciences and the tremendous possibilities arising for mankind were presented in a single day, showing how important the communication between different fields of research is in order to break down walls that can change the world.