Singapore celebrated its 50th anniversary on August 9, 2015. To mark this occasion, the Singapore National Institute of Chemistry (SNIC) hosted a commemorative golden jubilee chemistry conference from August 6 to 8, 2015.

As Professor Andy Hor, Chair of the organizing committee and president of SNIC, stated in his address to the delegates of the conference (and in the guest editorial that he authored together with Professors Xiaogang Liu, Xian Jun Loh, and Hua Zhang for a special issue of ChemPlusChem dedicated to this event), the function of the meeting was not only to celebrate but also to bring special friends, collaborators, and global partners together to connect, communicate, and collaborate [1].

And connecting and communicating is exactly what the 230 participants from 20 countries did extensively during the three days of the conference! Thus, one can readily assume that existing collaborations were strengthened and new collaborations established.

Each day of the conference started off with a plenary lecture, which was then followed by four parallel sessions. The first of these lectures was delivered by Professor Sumumu Kitagawa, Kyoto University, Japan, who gave an inspiring account on the enormous advances in porous coordination polymers/metal–organic frameworks in recent years (e.g., the successful separation of CO from a mixture of CO and N2). He emphasized that by focusing on three key properties (flexibility, collective behavior, and diversity in spatial and electronic structure), tailor-made porous materials for solving specific tasks may be synthesized [2].

Professor Lei Jiang, Chinese Academy of Sciences, Beijing, P.R. China, nicely illustrated in his lecture that by learning from nature his group was able to develop smart interfacial materials such as super-wettability systems, which can display self-cleaning, anti-fogging, anti-reflection, anti-corrosion, and anti-icing properties, thus holding great promise for applications in various areas [3].

The last plenary lecture was given by Chemistry Nobel Laureate Professor Robert Huber, Max Planck Institute of Biochemistry, Martinsried, Germany, who talked about proteolytic enzymes and their control, followed by sharing his personal experience with the foundation and development of two biotech companies [4].

Besides the plenary lectures, there were many other excellent presentations at the conference comprising 50 golden jubilee lectures, 53 commemorative lectures, and 27 invited lectures. One example is the golden jubilee lecture by Professor Ming Hammond, University of California, Berkeley, USA, who showed some beautiful data on RNA-based fluorescent biosensors for live cell imaging of cyclic dinucleotides. She used a “Where is Waldo?” slide to describe to the broad audience in a very visual way the challenge to detect a specific target molecule in the presence of numerous metabolites, some of which are comparatively similar to the target [5]. 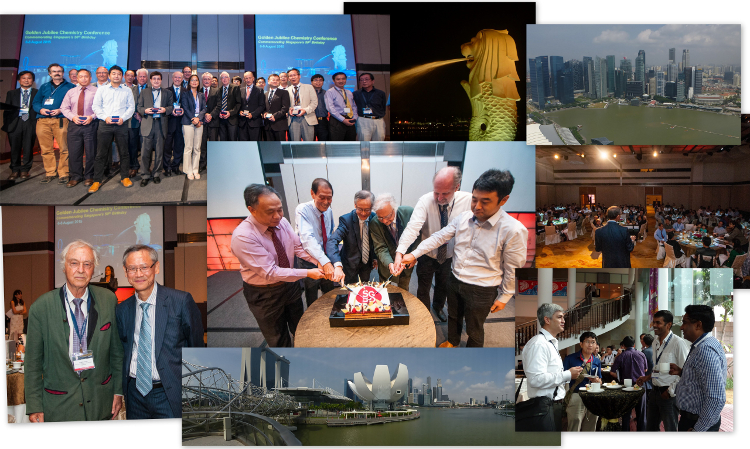 One of the outstanding talks at these symposia was given by Professor Xiaogang Liu, National University of Singapore, who is on the editorial board of Chemistry – An Asian Journal. He presented a recent breakthrough from his group and collaborators in the area of lanthanide-doped nanomaterials. By preparing specially designed multilayer core–shell upconversion nanocrystals, the researchers could fine-tune emission in the full color range by simply adjusting the pulse width of infrared laser beams [6].

And Lastly, a Toast

Congratulations to Professor Andy Hor, Secretary Dr. Yun Zong, Assistant Secretary Dr. Sen Wai Kwok, and all the other members of the organizing committe for making this conference a truly memorable event. The banquet at the end of the conference, which included a birthday cake-cutting ceremony, the presentation of a commemorative coin to each speaker, and wonderful musical performances, provided the perfect finale for this special conference.

The rise of Singapore to one of the global leaders in chemical research in just a few decades is more than remarkable. May the next 50 years be as successful or even better than the past 50 years for chemistry in Singapore!