The seventh ChemCar Competition took place on the occasion of the annual ProcessNet meeting in Karlsruhe on September 12, 2012. It was organized by the kjVis (kreative junge Verfahrensingenieure, creative young process engineers). Teams from seven universities in Germany and Austria (Fig. 1) had qualified to present their cars in the final stage of the competition, which involved designing and building a car powered by a chemical or biochemical reaction. The cars were supposed to drive a certain distance while carrying some weight. Both the exact distance and the amount of weight were chosen by lot before the competition.

Figure 1: Entrants and jury in the ChemCar Competition 2012.

The seven teams were:

The two students from the Technische Universität Dresden (Fig. 2) took advantage of the efficiency of the enzyme carbonic anhydrase to solvate carbon dioxide. This generated a pressure gradient between the reaction vessel and the carbon dioxide reservoir within their car. This gradient was used to drive the car. Further information is available on the team’s blog: www.bridgerider.de/blog.html 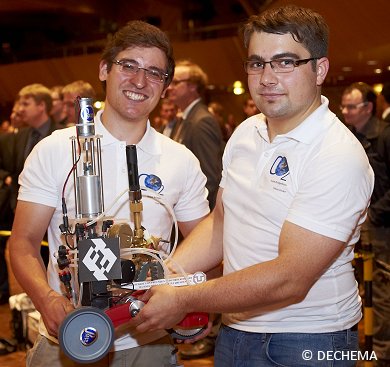 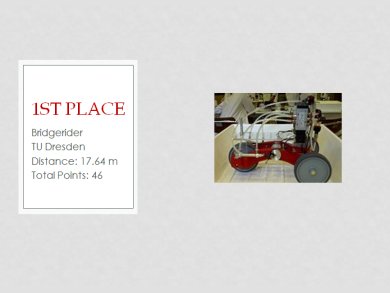 Figure 2: The team from Dresden.

The students from Clausthal (Fig. 3) used an electrochemical element containing vanadium and graphite electrodes in order to obtain a high electric current density. Depending on the prescribed distance and weight that the car carries, the charging of the battery was varied.

Figure 3: The team from Clausthal.

A Peltier element was the essential part of the car of the Technische Universität Dortmund team (Fig. 4). A Peltier element is a device that transforms heat into electricity. In this case, the heat from the catalytic decomposition of hydrogen peroxide was used to propel the car. Water vapor was used as an energy transfer medium in order to separate the chambers for the chemical reaction and for electricity generation. 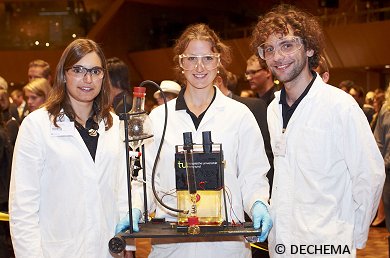 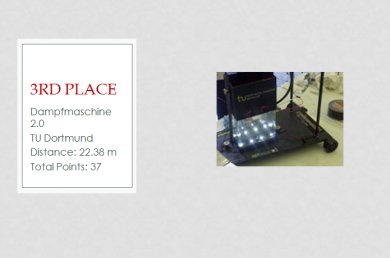 Figure 4: The team from Dortmund.

The car constructed by the team from Berlin (Fig. 6) also made use of the thermal energy of an exothermic reaction via a thermoelectric generator that transfered the heat of the reaction between hydrochloric acid and aluminium to an ice water reservoir while performing work. The car, TuPAC, drove 14.47 m with the team gaining 36 points and the fourth place. 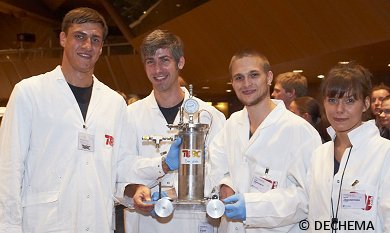 Figure 6: The team from Berlin.

The team from the Fachhochschule Münster and the only team from Austria – from the University of Graz (Fig. 5) – both made use of a Peltier element as well. The team from Münster, the fifth team in the overall ranking, obtained a total of 30 points with their car called CarO, which drove 10.25 m. Unfortunately, the car from Graz, the Dilettantenmobil, did not drive at all in the all-important final stage and the team finally ended up in the seventh position. Due to the team’s innovative concept, they still received 25 points.

Figure 5: The teams from Münster (left) and Graz (right).

Carbon dioxide, the reaction product from the reaction between sodium hydrocarbonate and acetic acid, was used to accelerate the car of the team from the RWTH Aachen (Fig. 7) by inducing the winding of a rope, which was indirectly connected to the car’s wheels. As this rope broke twice during the competition, the car called Skydriver drove only 0.86 m, but the team still achieved 30 points in total, resulting in the sixth place. 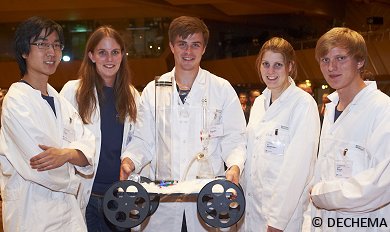 Figure 7: The team from Aachen.